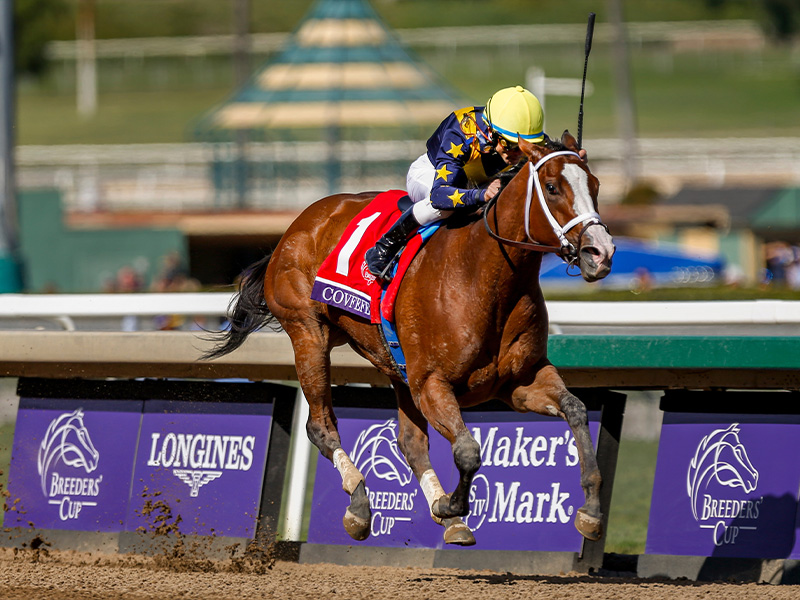 ARCADIA, Calif. (Nov. 2, 2019) – LNJ Foxwoods’ Covfefe ($5) surged to the lead at the top of the stretch and held off a bid from Bellafina by three-quarters of a length to win the 13th running of the $1 million Breeders’ Cup Filly & Mare Sprint, the first of nine World Championship races Saturday at Santa Anita.

Trained by Brad Cox and ridden by Joel Rosario, Covfefe covered the 7 furlongs on a fast main track in 1:22.40.

The victory was the second of the weekend for Cox who saddled British Idiom to victory in Friday’s Breeders’ Cup Juvenile Fillies. For Rosario, it is his 10th Breeders’ Cup victory and second in the Filly & Mare Sprint having won previously in 2015 on Wavell Avenue.

Longshots Danuska’s My Girl and Heavenhasmynikki dueled for the early lead with Covfefe rating in third. Turning for home, Covfefe moved three wide to the front, shook off a challenge from Spiced Perfection and then had enough to hold off Bellafina.

Covfefe is a 3-year-old Kentucky-bred daughter of Into Mischief out of the Unbridled mare Antics.