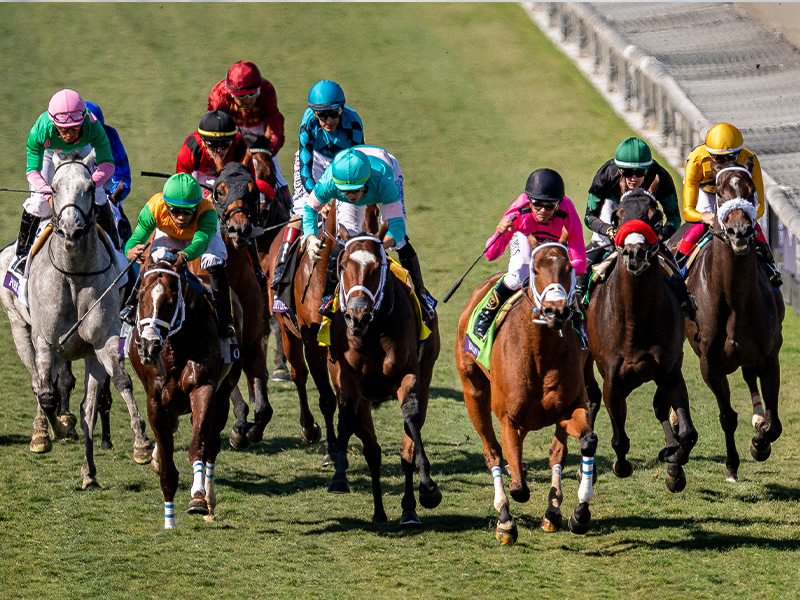 Winning and second-place trainer Peter Miller (Belvoir Bay (GB) and Om) – “I was looking at Stormy, Om and Belvoir Bay and all three broke sharp, so that was key. I wanted them all to break sharp and they did. All three jockeys followed instructions to perfection. She’s just a tough filly. She’s just so tough. I was telling everyone all week that she ran second to Blue Point and Blue Point would be even money in this race. She got no respect. I don’t know what they were thinking, but Mr. Barber had confidence and he bet with both hands.  Om ran awesome. Stormy Liberal is not quite the horse he was the last two years, but he was right there. He ran his butt off. And then Om, I can’t say enough about how great he ran. To get his head down for second and run one-two in this race again after doing it two years ago is just phenomenal. I felt good at the eighth pole. I felt real good at the wire."

Winning jockey Javier Castellano (Belvoir Bay (GB)) – “This horse just rocketed out of the gate, and the break is so important in these races.  She relaxed for me around the turn and it gave me confidence that we were going to win.  Peter told me the horse was training great and he had confidence in me.  I’m very lucky and happy to be part of this horse.”

Second-place jockey Manny Franco (Om) – “I had a great trip. My horse broke clean. I was able to stalk the speed. I was in a good spot. The horse ran huge. I’m very happy with the way he ran.”

Third-place trainer Jason Servis (Shekky Shebaz) – “Thrilled to death. I mean, he had never run against horses this good. But he tried, he ran hard. No excuses. But he ran a good race.”

Third-place jockey Irad Ortiz Jr. (Shekky Shebaz) – “He didn’t break that good so I kind of had to take a hold, which isn’t his style. He still ran good. He fought for second.”

Fifth-place jockey Paco Lopez (Beaten favorite Pure Sensation) – “He missed the break, so I had to use him just to get position.  He likes to be closer to the lead and this left us too much to do.  I think that cost us the race.”