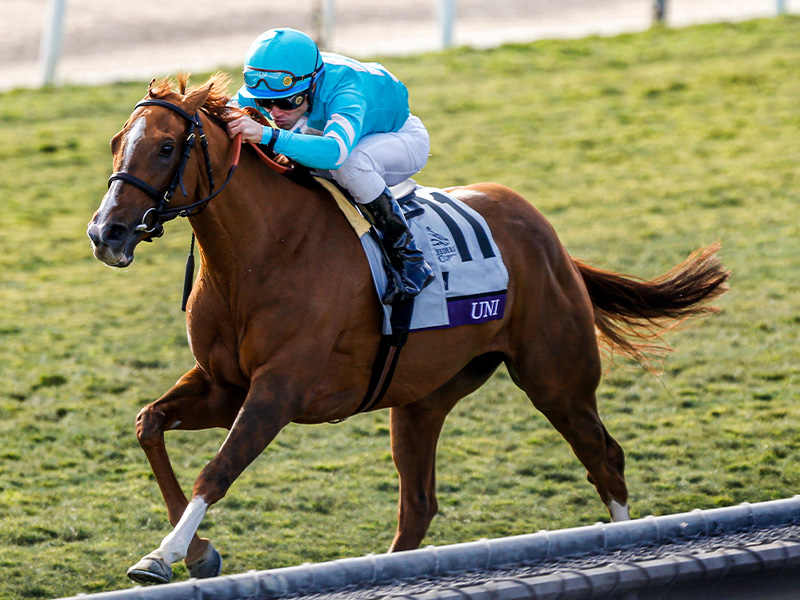 Winning and third-place trainer Chad Brown (Uni and Without Parole) – She broke right with the first pack and then they ran away from her. Joel did exactly what we planned, which was to break as well as you can and let her find herself in the first turn. Luckily Without Parole moved to the rail for us and we were in the two path and sort of raced as a team down the backside. I just loved where my spot was. Yes, the Turf seems to be very firm, but when they threw that fraction up, I absolutely loved where we were. Joel fits her so well. Hats off to him. Obviously, he’s a world class jockey and has won a lot of races, but the relationship between him and this horse is about as strong as you can get. The first time he saw her and breezed her we saw this little pint sized keg of dynamite and I didn’t think she would run a mile and a quarter but that’s what they wanted to do (in her first start in the U.S. in the Belmont Oaks) so well did it and surprisingly she ran well at Belmont, but it was always in my mind to cut her back. Last year after she won the Matriarch she was really stiff after the race so we just gave her the time. The partners were great. She laid down one of the fastest final quarters I’ve ever seen on a flat trip and she paid the price for it. She was just body sore. So we gave her plenty of time. The partners were great about that, so we waited until she was 100 percent and eased her back to training and got her sound and it all worked out. That was the plan.

“Without Parole ran great. I thought he ran terrific. So proud of him. Then again he came to us in outstanding condition and I think he’ll improve. If I had a little more time and another piece of work or two and who knows what would have happened today. He could have been a little closer. I think he’s going to stretch out this horse. I really do. I spoke to John Gosden whom I have enormous respect for and he thought he would stretch out as well. I was really pleased with the condition I got this horse. It’s no surprise because it’s John Gosden. He takes great care of his horses.”

Winning jockey Joel Rosario (Uni) – “We had a perfect trip. The speed got away from me a little on the backstretch, but she was comfortable and in a good spot so I just sat still with her.  I asked her at the three-eighths pole and she gave me a strong run.  That’s when I knew we would win. But when we got alongside of her (Got Stormy), she fought back a little. For a minute I thought oh-oh, because she’s a very nice filly who beat us this summer. But, my filly still had more left and we pulled cleared her in the last sixteenth.”

Second-place trainer Mark Casse (Got Stormy, beaten favorite) – “You know, things didn’t go as planned in the first turn but I thought Tyler (Gaffalione) did a great job. I thought we might be on the lead or sitting right off of it but it looks like a few others had that idea. So he had to choose to sit back which, is her best race. (Tyler) said he could hear Uni coming and he shot a little early, but she just beat us. I’m proud of her. She’s turned out to be a hell of a filly.”

“I don’t have any excuse for her, but she doesn’t need any excuse. She ran her butt off. She’s a hell of a horse and we’ll see what happens. (Owner) Gary (Barber) has her in the sale (Fasig-Tipton November), but she’ll make a great 5-year-old.”

Second-place jockey Tyler Gaffalione (Got Stormy, beaten favorite) – “It was a perfect trip. We were a little worried about the pace scenario after the scratches, but a couple horses jumped out in front of me and I was able to get her into a nice rhythm on the backside. She was there for me today. We just got outrun. She was second best.”

Third-place jockey Irad Ortiz Jr. (Without Parole) – “I got a perfect trip. I can’t complain. Saved all the ground then tipped him out. No excuses. Probably a little short for him.”

Fourth-place trainer Aiden O’Brien (Circus Maximus (Ire)) – “We lost a bit of ground at the start and I think at the end he was feeling the effects of the long season. He’ll be a really nice horse next year.”