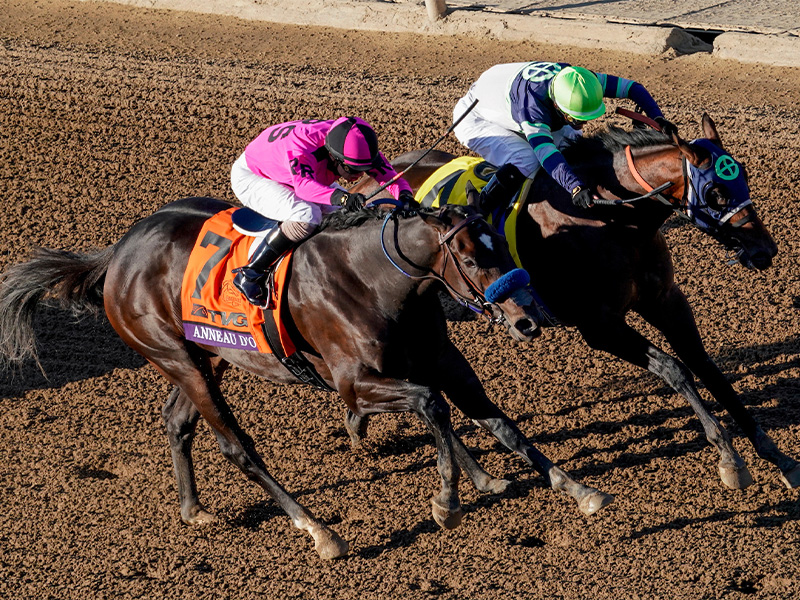 Winning Trainer Peter Eurton (Storm the Court) – “It’s just so special to do this for this for Exline-Border, they’ve been so supportive through the years. They had a bit of a Champagne Room minute, so they had a taste of it here. (Bloodstock Agent) Marette Farrell just does such an awesome job buying horses. It just means a lot: my family, my daughter, my wife, my home...

“In the American Pharoah I still feel like he didn’t have a chance to run. I still felt a little uneasy about what happened in the prior race down south (losing the jockey at the start of the Del Mar Futurity), so we decided to put the blinkers on him on Flavien's (Prat) recommendation. It just seemed like it got him a little more focused and he probably would have been able to do it without them – but it did help out a lot. It's a lot of team work.”

Winning Jockey Flavien Prat (Storm the Court) – “I got to ride him the entire race today.  I wanted to be on the lead today.  He relaxed for me nicely.  I think the blinkers helped him a lot.  He really battled all through the stretch.  I always thought he was going to win.”

Second-Place Jockey Juan Hernandez (Anneau d’Or) – “At the three-eighths pole it wasn’t him, but when I started working him, he started running again. At the eighth pole, I thought he might win but the horse came back again and got me.”

Third-Place Trainer Peter Miller (Wrecking Crew) – “It's been a great day. I think if we could have stayed inside it could have been a different story. We had to go wide and that cost us some momentum and ground (while) waiting. The horse ran super. That's horseracing. Great ride by Paco (Lopez). And, he had two months off, so he was short. We’ll definitely look at Los Al (-amitos Futurity). He showed the last sixteenth of a mile when he didn't kick that he was short, but the horse ran big.”

Third-Place Jockey Paco Lopez (Wrecking Crew) – “At the 3/8-pole there were too many horses in front of him. I decided to go outside to go around everybody. I thought they might stop but they never stopped. My horse ran good today. He got a little tired, but he ran great.”

Sixth-Place Trainer Bob Baffert (Eight Rings) – “He was in a good spot the whole way and Johnny (Velazquez) said at when they came to the three-eighths pole he took a deep breath and then he just didn’t go when  Johnny asked him.  He didn’t show up. That’s not like him. I thought he was training really well but for some reason he just didn’t show up today. He was perfect, he broke beautifully, he was right there. You’ve got to give credit to the winner. He just kept on going; they were going pretty quick on this deep track. When they turned for home my horse was completely out of it.

“I always blame myself. Maybe I missed something but I thought he was ready. Everything was going great until the real race started. He didn’t show up. The winner ran a great race.”

Sixth-Place Jockey John Velazquez (Eight Rings) – “Perfect position. I was just where I wanted to be. Sat well. Got to that second turn and I didn’t have anything.”

Jason Loutsch, racing manager Albaugh Family Stables (Beaten Favorite Dennis’ Moment, eighth) – (On the stumble at the break) “It was over. We had no chance from the start. (Trainer) Dale (Romans) just about took off out of box when it started. We talk all the time about highs and lows of the game. I can tell you this is about as low as I’ve ever been in a horse race. But, we have a lot of confidence in this horse and I have no doubt he’ll bounce back. I don’t even know how Irad (Ortiz Jr.) stayed on to be honest. He went straight down all the way. It was unfortunate circumstances, but hopefully he came back good and we’ll live to fight another day.

“That’s all that matters right now (is that he’s ok). We know we have a horse who can do anything. He had no chance. That’s the bottom line.”

Jockey Irad Ortiz Jr. (Beaten Favorite Dennis’ Moment, eighth) – “Out of the gate, I said to myself ‘Oh man.’ You don’t see too many horses like that stumble that badly out of the gate and come back to win the race. I asked him for run early, he gave it to me and put a good effort into the turn but then at the quarter pole he slowed down.