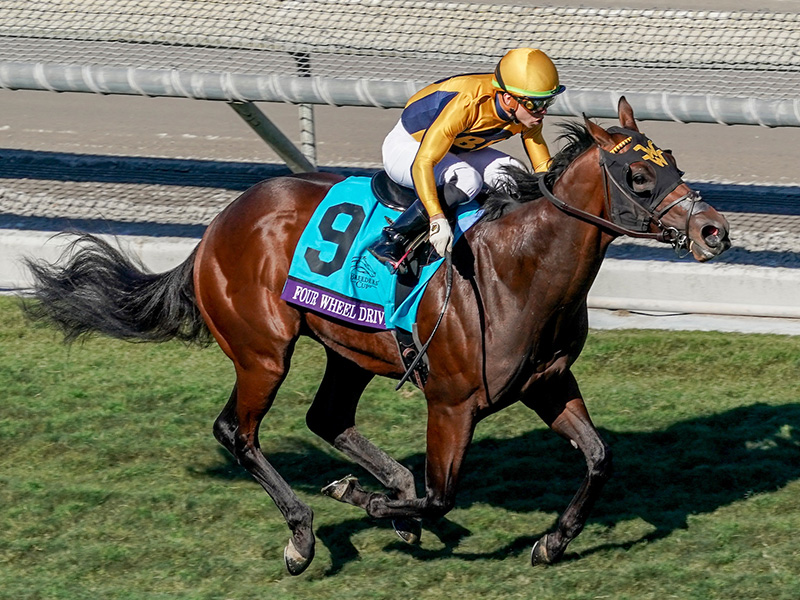 Winning Trainer Wesley Ward (Four Wheel Drive) – “We got it. It’s great for the owners, fantastic for Coolmore, fantastic for everyone that put a lot of money behind American Pharoah. There is a lot riding on him as far as how his progeny will turn out. For this horse to turn out to be a Breeders’ Cup winner is sensational. He (Four Wheel Drive) is a real cool dude. He takes it all in. He popped right out like a real professional horse will and he kind of settled. When (Ortiz) called upon him, away he went.”

Winning Jockey Irad Ortiz Jr. (Four Wheel Drive) – “I got a good trip. He broke good and put me on the lead. He was relaxed and turning for home when I asked him, he responded. He ran really well. He’s a nice horse”

Second-Place Trainer Mike Maker (Chimney Rock) – “He ran great. No complaints. We’ll get through today and figure it out tomorrow. I don’t think five furlongs is his best distance, so we have been trying to keep him a little sharper and close to the pace and that worked out.”

Second-Place Jockey Jose Ortiz (Chimney Rock) – “He broke alertly, rated behind the leader and responded when I asked him.  I wasn’t sure if we were going to catch the winner, but he was really trying.  Good race.  They are both are really nice horses.”

Third-Place Trainer Gary Contessa (Another Miracle) – “He’s smaller in stature and he really got beat up going down the backside. He was like a ping pong ball, just in the wrong place with three or four horses inside of him and three outside of him, and you see him beat up. Then to overcome that and come running and finish third, I thought he ran a heck of a race. I’m very proud of him today.

“He goes back to New York Sunday morning and then probably on to Florida. I doubt he’s going to run again this year.”

Third-Place Jockey Manuel Franco (Another Miracle) – “I had a very good trip. At the beginning, the two horse (Band Practice) was trying to get to the same hole I was and he kind of pushed me out a little bit. Then, I was able to do whatever I wanted after that. I couldn’t ask for a better trip. He ran great. He tried so hard today. He was there for me the whole way. He did his best.”

Fifth-Place Trainer Thomas Dascombe (Dr. Simpson (FR)) – “She’s run an absolute stormer. She half missed the break, so she had to use a lot gas to get up there. She ran her heart out, probably a career best. She’s in the sales, so I’ll to speak tp her owner and decide what the best way forward is.”