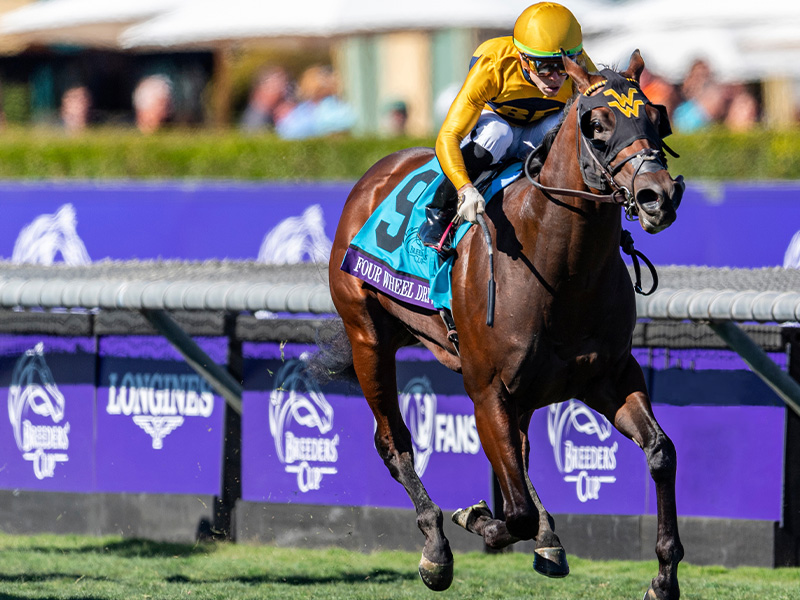 ARCADIA, Calif. (Nov. 1, 2019) – Breeze Easy’s Four Wheel Drive ($5) was fastest out of the gate and led all the way to turn back Chimney Rock by three-quarters of a length to win the second running of the $1 million Breeders’ Cup Juvenile Turf Sprint Friday afternoon to kick off the 36th edition of the Breeders’ Cup World Championships at Santa Anita Park.

Trained by Wesley Ward and ridden by Irad Ortiz Jr., Four Wheel Drive covered the 5 furlongs on a firm turf course in :55.66. It is the third Breeders’ Cup victory for Ward and sixth for Ortiz.

Four Wheel Drive, who did not make his debut until Aug. 31 in a stakes race at Colonial Downs, quickly opened a daylight advantage and maintained a safe advantage over Chimney Rock from start to finish.

Now undefeated in three starts, Four Wheel Drive is a Kentucky-bred son of Triple Crown winner American Pharoah out of the More Than Ready mare Funfair. The victory was worth $550,000 and increased Four Wheel Drive’s earnings to $692,500.