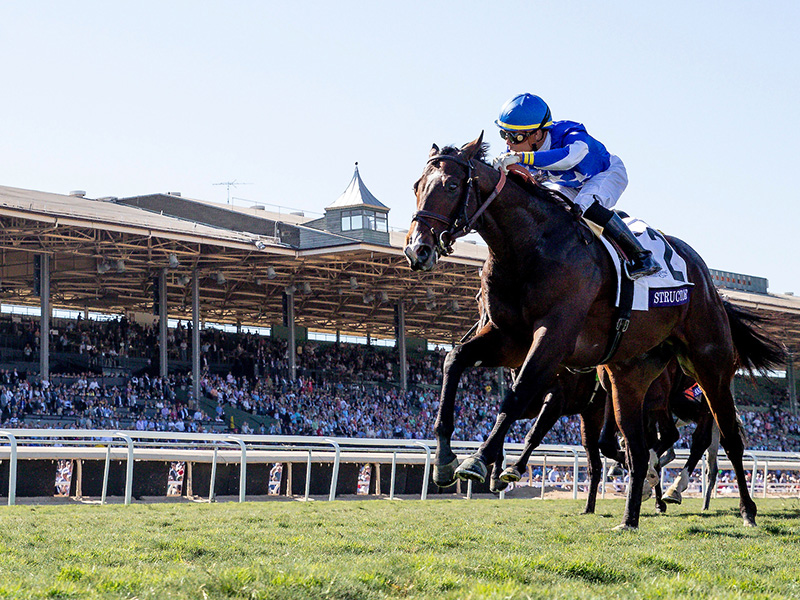 Winning Trainer Chad Brown (Structor) – “He’s just improving so much every week, this horse. We’ve always thought a lot of him and he’s come in here and been improving week to week. His last race was very impressive to me. We thought he was sitting on another good race. Irad (Ortiz) opted for the other horse and that’s how it goes. Jose was obviously a very capable replacement having been one of the leading jockeys now for the last couple years. We had a lot of confidence in him and I can’t tell you how proud I am of him. Yes, he had a great post but he made all the right calls. He just rode an outstanding race and the horse ran an outstanding race. My staff did a great job bringing this horse along. I’m going to try this horse on dirt at some point. He trains very well on it. He deserves it and he’s got the right running style to potentially run on both surfaces.”

Winning Jockey Jose Ortiz (Structor) – “He broke alertly and I was able to save ground all the way around.  I wanted to ask him to run sooner, but I had nowhere to go at the three-eighths pole.  Once we got into the clear, he really finished strong.  He’s a very nice horse.”

Second-Place Trainer Peter Miller (Billy Batts) – “He ran huge. I knew he was coming into this race doing great and the key today was (Paco Lopez) got him to relax. He wasn’t fighting the jock. I knew he could get the trip. Coming into the lane, I was screaming to myself “he’s got horse!” and he only gave it up in the last 10 or 20 yards. He kicked and (Structor) just ran him down. He ran awesome.” “

Second-Place Jockey Paco Lopez (Billy Batts) – “At the eighth pole I thought I had it, but the other horse came flying on the outside and caught me. My horse ran a good race against the best horses in the world.”

Third-Place Trainer Rusty Arnold (Gear Jockey) – “I thought he ran well. I haven’t seen a replay yet, but I thought he got into some traffic and had a little bit of issues, but he fought, and fought his way through. I thought it was a good race. There was a lot of traffic. I only saw the race with my naked eye so I haven’t seen a lot yet, but Tyler (Gaffalione) said he just got a little tired.”

Third-Place Jockey Tyler Gaffalione (Gear Jockey) – “It was a good trip. I sat fifth, about in the two path most of the way, two or three lengths off the lead. I just sat there until we straightened away, picked a spot and he came home for me. I thought it was a huge race. He’s still a maiden, but he keeps stepping up big time and improving. Hopefully he will take the next step forward and we’ll be good in the future.”

Fifth-Place Trainer Aiden O’Brien (Beaten Favorite Arizona (IRE)) – “With him getting a bit slowly away, Ryan (Moore) had to accept the position in which he found himself. I don’t think it was a fast pace, which also didn’t help him, but we’re not too disappointed. He’s going to be a lovely 3-year-old and I’d imagine he’ll go straight to the Guineas now.”