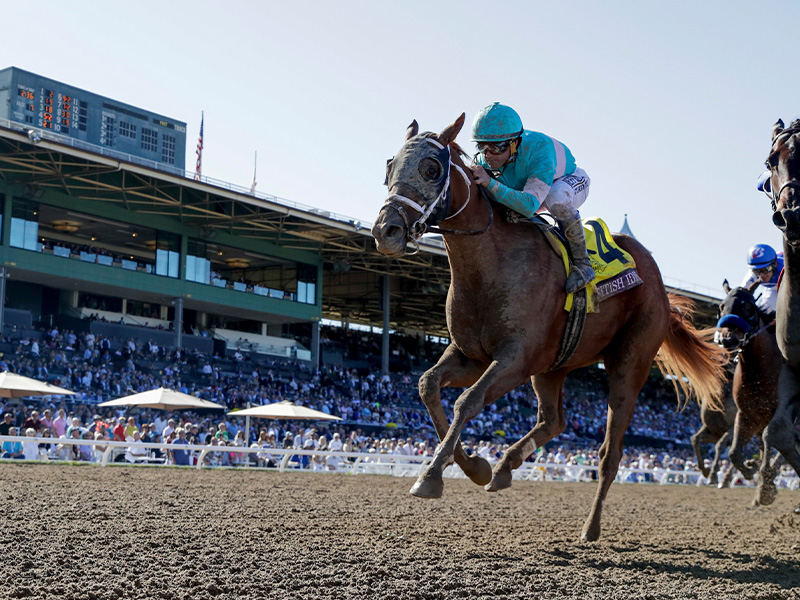 Winning Trainer Brad Cox (British Idiom) – “She’s a really good filly and this was a great race. We were fortunate to come out on top, Javier (Castellano) did a great job. I’m not so sure she liked the racetrack. It looked like she was struggling a bit to me down the backside. She’s a tough horse, she’s 3 for 3. I liked where we were. But I thought Javier was kind of knuckling down on her as opposed to Keeneland (in the Aclibiades) when she was kind of taking him there a little bit easier. She was fit. She was ready to go today. She’s been touting us the last few weeks and I’m very proud of her.”

Winning Jockey Javier Castellano (British Idiom) – “It was pretty rough in the first turn. We bounced around a little bit. That was not the idea. The idea was a clear trip and stalking a little bit early. Unfortunately, that’s the way it developed in the first turn. I took it from there and was very patient and confident because I had the best horse in the race. That’s what she proved in the last part of the running. She kept running in a nice way and she finished really well.”

Second-Place Trainer Simon Callaghan (Beaten Favorite Donna Veloce) – “She ran terrific. You can’t ask for much more. She didn’t win, but she ran a courageous race and that’s all you can ask. The race unfolded the way it did. I think Flavien (Prat) did the right thing and went outside of them and she ran great.”

Third-Place Trainer Bob Baffert (Bast) – “When I saw the pace, I knew that it would be tough. I’m so proud of her. She ran her heart out to stick around. The time of 1:47 is way too slow. I’m so proud of her. She could have easily won it off the pace but I told Johnny (Velazquez) to just get her out there and put her in the race and he did. Unfortunately, we went too fast. But that’s horse racing. She’s got a big heart. She did not want to quit. She did not want to quit. She went five lengths too fast early. Otherwise I really think she would have been right there. She showed a lot of guts. She gutted it out to hang on in there. The quality is there. It was good race. These are good fillies”

Third-Place Jockey John Velazquez (Bast) – “I ended up in a speed duel I didn’t want to be in, but I didn’t want to take away what she was doing easy. We went a little bit too fast early and she got a little tired down the lane.”