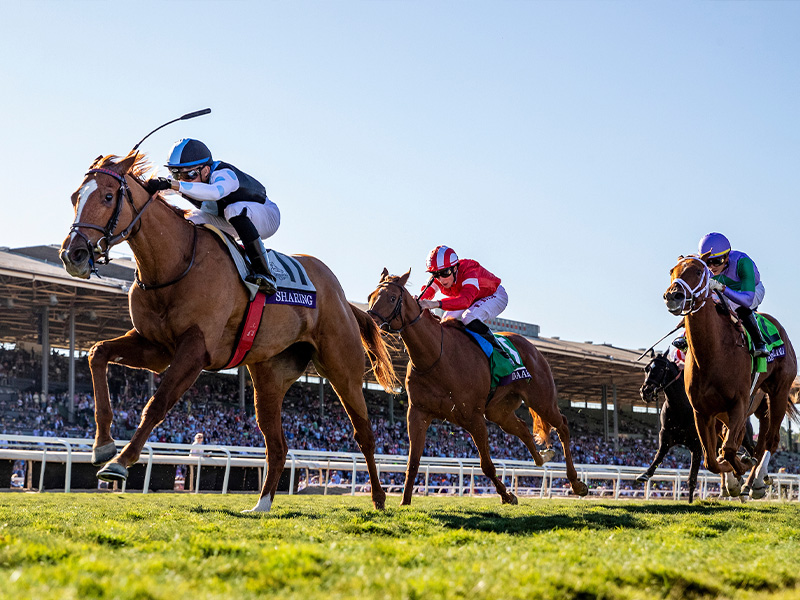 Winning Trainer Graham Motion (Sharing) – “It’s amazing. Her mother (Shared Account) was really the most special filly I’ve trained. I mean I’ve had some really nice fillies but she was very special. It’s so hard to win these races. Just to get here, it’s really surreal to be honest.”

Winning Jockey Manny Franco (Sharing) – “She broke so nice out of the gate and got the position behind the speed I wanted. Down the backside, she settled pretty nicely. By the three-eighths pole, I waited for the right moment to make my move and she was there for me.”

Second-Place Trainer Roger Varian (Daahyeh) – “She ran an absolutely fabulous race. They didn’t go a great pace. If they had gone faster, we would have been able to attack them. The winner got first run on us, which eventually won them the race. Our filly was learning to bend as well as trying to quicken. Unfortunately, she hasn’t quite got there. Finishing second is always a funny feeling. Obviously, we’re very disappointed, but at the same time, immensely proud.”

Third-Place Trainer Todd Pletcher (Sweet Melania) – “I thought she ran well. Jose (Ortiz) had to use her a little bit to get to the position he wanted. She was a little bit wide in the first turn, but they were able to back down the fractions pretty well in the second quarter. We waited, she responded, but we couldn’t quite fend off two really good fillies there in the end. It was a quality race where they went several ticks faster than the colts.

“I was proud of her effort. I was a little concerned about coming back in 23 days, but she seemed like she did everything right. She did well.

“She’s a nice filly and we’re very proud of her. We”ll take her to Florida and freshen her up. She had a solid campaign this year.”

Third-Place Jockey Jose Ortiz (Sweet Melania) – “No excuse. Very nice trip. It was a little fast early, but we had to take our position early.”