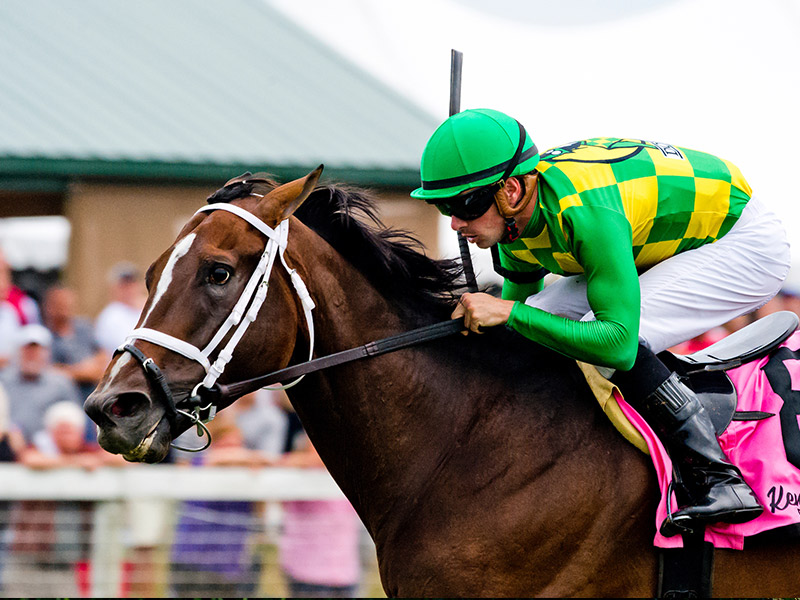 HALLANDALE BARCH, FL – When Donegal Racing purchased a yearling colt in 2015 later named Arklow, it projected the son of Arch as a Triple Crown series prospect. Five years later, Donegal is an accomplished distance grass horse likely to be one the favorites in the Pegasus World Cup Turf Invitational (G1) presented by Runhappy on Jan. 25 at Gulfstream Park.

A bust on dirt with an 0-for-5 record, Arklow did not make it into the 2017 Kentucky Derby field, but he won the first of his three graded stakes earlier that day at Churchill Downs in the American Turf (G2). Since the switch in surfaces he has flourished, has compiled a 6-5-1 record in 19 starts – topped by a win in the Joe Hirsch Turf Classic (G1) last year – and has picked up almost all of his $1.8 million in career earnings on turf.

“We kind of always thought he would be a grass horse, but he was training well enough on the dirt and he was running well on the dirt to keep us trying,” Cox said. “When it looked like he wasn’t going to cut it, be a Kentucky Derby horse, we made the move to the grass in April. He had run in a few stakes as a maiden. He ran well and didn’t embarrass himself.

“When we moved him over to the grass he took off.  That is obviously what he wanted. He ran well enough on the dirt, but it’s not his surface.”

Luis Saez, twice the leading rider at Gulfstream Park, will be up on Arklow for the first time in the Pegasus World Cup Turf. The 1 3/16 miles race will be Arklow’s first since he was eighth but beaten less than three lengths during a wide trip in the Breeders’ Cup Turf (G1). Stats show he covered more ground than any of the 12 horses in the race.

The Turf completed a strong season during which he finished in the top three in five consecutive graded stakes. Arklow is quite consistent, but his running style is anything but predictable.

“Honestly, it’s really with the break with him,” Cox said. “Sometimes he breaks really sloppy, doesn’t get involved at all and just comes running. Even if the pace is slow he will close into a slow pace. He’s honest. There are times when you think there is a lot of speed, or a little bit more speed for maybe a marathon route and you he’s going to be way in the back and he breaks and he’s mid-pack. He’s always throwing us a curve ball. He’s a hard horse to figure out and plot where he’s going to be in a race. He’ll just break and you never really know where he’s going to put himself. It’s kind of odd, but the main thing is he runs down the lane every time.”

Donegal Racing, which owns Arklow in partnership with Joseph Bulger and Peter Coneway, usually gives its horses Irish names. Arklow is a town in County Wicklow on the east coast of Ireland south of Dublin. It was founded by the Vikings in the 9th century.

Cox said the 6-year-old usually touts him on when he is ready to run a big race. Cox has liked what Arklow has shown him since he returned to the work tab last month.

“We freshened him up as little bit in the barn. He never went anywhere,” Cox said. “We started cranking him back up when we decided to make this move to the Pegasus probably in late December. He’s just come back extremely well. He’s been working really well and when he works well he runs well. He’s a very, very honest horse and gives you what you want.”

Arklow often runs in 1½-miles races. He will make his first career start at Gulfstream at a slightly shorter distance but with a jockey with loads of experience on the course.

“Looking at it, I would think he’s going to need to be in the mix early,” Cox said. “Hopefully, coming off a little bit of a freshening he will be a little sharper than sometimes he normally is. Hopefully he will be in the mix.”