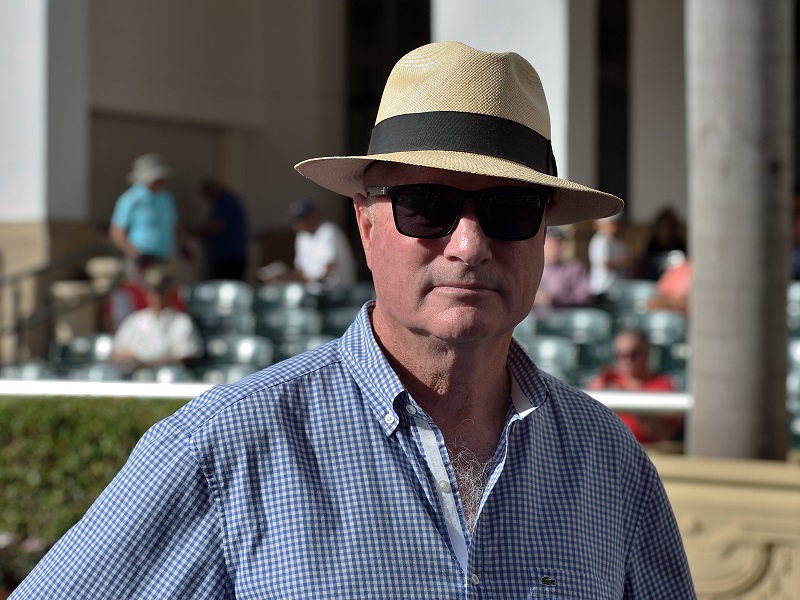 “It’s always amazed me,” and Mandella, who saddled his first horse in 1974 and was inducted into the Hall of Fame in 2001. “Since I first started out and had my first couple of good horses – Bad ‘n Big being the first real good one – as soon as one started to wear out, another good one would pop up. It’s kind of still going on.”

Omaha Beach, the latest in a long, long list of stars to pop up in Mandella’s stable, will be the likely post-time favorite for the 1 1/8-mile medication-free Pegasus World Cup.

Remarkably, Mandella, who has saddled the winners of more than 2,150 races and $142 million in purses, has been blessed with a seemingly endless stream of Grade 1 stars without training huge numbers of horses.

“We don’t have a real big outfit. I used to be bigger – I used to keep Hollywood Park and Santa Anita with about 60 to 75 horses. That was my top,” Mandella said. “I tried to get a little bigger than that, but I couldn’t handle it. When I turned 60, which was nine years ago, I took myself down to just one barn with 40 horses and we’re still there.”

‘I Used to Think I was Stupid’

The bigger his stable grew, the more uncomfortable Mandella felt, a development he attributes to a less-than-stellar academic background.

“I barely made it through high school, seriously. I had a job before school and after school. I was riding horses before I went to school, exercising, breaking yearlings. I worked my tail off,” Mandella said. “I used to think I was stupid. Being a little more realistic looking back, I was working at 4:30 in the morning. I started school at 10:30 because I had a job at a farm breaking yearlings. At night, my father and I would meet and we’d train. We had a little track at home and we’d train until 9 o’clock at night. I rested in school and that’s about all I got out of it.”

Mandella stressed the importance of getting an education to fall back on.

“What a young person needs to realize is that if he ever has success, he’d better have a little education to work with the success, and I lacked that,” he said. “I could feel it as I got too big.

“I haven’t figured it out yet how Todd Pletcher and those guys do it and how good they do. I can appreciate what they can do and be consistently successful. I could never feel comfortable once I got over that 65 number,” he added. “Two barns, dealing with people and horses, it was more than I could take in at one time.”

Mandella’s stable surely would have grown into triple digits had he been more comfortable with a larger operation.

“I’ve never applied for a job in my life and I’ve never asked for a horse to train. Somebody has always put things in front of me,” he said. “Either we bought good ones or, as in the case of Gentlemen, Siphon, Virginie, who won the Beverly Hills (G1), and Romarin, who won the Early Times at Churchill (G2), I was asked to train those horses by people who had seen something they liked about me and called me and said, ‘I’ve got a horse named Sandpit from Brazil.’ I got calls from people asking would I take a horse. I’ve been very fortunate that they were the right people with the right horses.”

Gentlemen, Siphon, Virginie, Romarin and Sandpit, among several other graded-stakes winners, were imported from South America and flourished under Mandella’s care.

“This first reason is, it was the horses that were sent to me. Below that, I would say it was because I grew up on a ranch and broke hundreds of yearlings over a six-year period. Dealing with the minds of horses – when you break horses you have to read horses’ minds to get along – that’s the thing,” Mandella said. “It’s your job to teach them how to gallop, change leads, and all that stuff. It’s an important part of training South Americans – you have to retrain them. If you make a mistake in that process, you have an outlaw, a bad actor, or they get hurt or they’re unhappy. That’s part of the transition from South America, more than Europe – to back up and rebuild and put an education with it.”

Mandella, who also trained the French-bred 1993 Horse of the Year and turf champion Kotashaan, has experienced considerable success with veteran campaigners such as Gentlemen, Sandpit and The Tin Man through the years.

Mandella attributes his success with older campaigners with the lessons he learned working with his father, Gene, at their Cherry Valley, Calif. ranch while paying much less attention to his lessons in school earlier in the day.

“The first reason is the horses I’ve had. The underlying reason would be growing up on my father’s ranch where we had horses hurt badly. We had a small little ranch. Dad was a blacksmith. We trained and took care of horses almost as a hobby more than a job. We’d get horses that were hurt. We’d try to rest them and get them back training and getting them back to the races,” Mandella said. “We could see that people didn’t know when to stop at the first warning. That was the lesson I learned from that. You learn not to push your injuries too far and ask too much of them. Stop and fix it, and maybe you get a better horse after it’s over. I think my career stands for that.”

While keeping current, Mandella has remained ‘old school’ in his training.

“I listen about every machine, every new vitamin and leg paint. You try it, but pretty soon you throw that out and go back to what you were doing. The basics are the most important things. I learned them from my father. The finer points I learned from Lefty Nickerson, V. J. Nickerson,” he said. “I only worked for him for one year, but he and I had a relationship where he could see me a little puzzled and he’d say three words and it would all come together for me. Everybody in life should have somebody like that. Lefty was very good for me.”

His tried-and true training methods have always served Mandella and his array of stakes winners well. Pleasantly Perfect would hardly have been able to win the 2003 Breeders’ Cup Classic (G1) and 2004 Dubai World Cup (G1) without the special attention paid to him by his trainer.

“As a 2-year-old he had a virus that affected his heart. You’ve heard of people 35, 40-years old working out in the gym who drop dead of a heart attack and they don’t know why. They find out it’s Pericarditis, an inflammation of the heart sac and fluid around the heart. He had that as a 2-year-old,” Mandella said. “I turned him out for a year and he was better but not good enough. I turned him out again and at the end of his 3-year-old year he started running. He moved – Boom! Boom! Boom! – into some big stuff. He was that good of a horse.”

Pleasantly Perfect capped a record-setting four-win day for his trainer in the 2003 Breeders’ Cup.

“I’m sitting in the box with the owner and I’m thinking, ‘This poor guy doesn’t have a chance in hell. I’ve already won three of these. What chance has he got? He’s carrying 500 pounds going into the gate,’” Mandella said with a chuckle. “And he ran the race of his life.”

“Winning the Dubai Cup [was special] because I had been there five times and we’d ran good. It kind of made you want to win it,” he said. “For Pleasantly Perfect, particularly, to win it was special.”

Where It All Began

Pleasantly Perfect, Gentlemen, Sandpit, Kotashaan, Siphon, Dare and Go, The Tin Man, and, of course, Beholder, among so many others, have provided much success and joy, but Mandella didn’t hesitate when asked if any horse stood out as he looks back on his career.

“The one I owe probably the most is a horse called Bad ‘n Big – a horse I trained in the ‘70s. He won the Cinema Handicap and beat Iron Constitution. He won the Big Crosby Sprint in 1:07-and-4 at Del Mar. He ran against top competition and retired at 7 or 8 from being a 2-year-old,” he said. “Each one of his big races was as good as anything since, because it was new to me and I knew that if I didn’t get going then, it was going to be a long struggle. That’s the way this business goes. You don’t hang around for 20 years and all of a sudden just get going. You either make it or you don’t. I owe him so much.”

Nearly four decades later, Beholder demonstrated the same longevity at the top, earning Eclipse championships at 2, 3, 5 and 6 before retiring with $6.1 million in earnings and 12 Grade 1 victories, including wins in the 2012 Breeders’ Cup Juvenile Fillies, 2013 Breeders’ Cup Distaff, 2016 Breeders’ Cup Distaff and 2012 Pacific Classic.

“She had extreme freakish ability. She was a little hard-headed. When she was young, she was a challenge. As we got going, she wanted to leave the gate and run as far as she could as fast as she could, which was good enough most of the time,” Mandella said. “When she won the [2013] Breeders’ Cup [Distaff] and beat Royal Delta that was the day I told [jockey] Gary [Stevens] to take her back – we’d been training her that way for a year – she responded. She was a better horse and could do what you wanted her to do.”

It is clearly not by accident that Beholder and Bad n’ Big’s long and fruitful careers mirrored that of their Hall of Fame trainer.