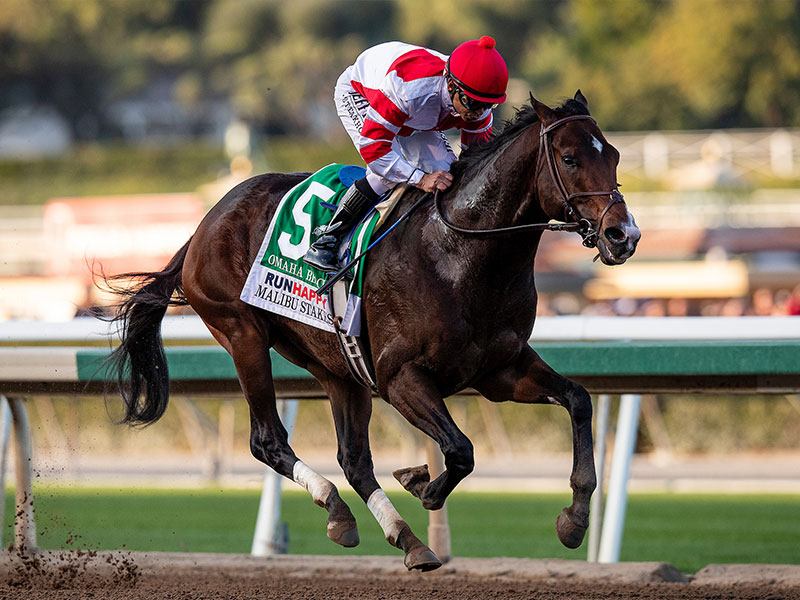 HALLANDALE BEACH, FL – Omaha Beach is scheduled to race for the final time Saturday at Gulfstream Park, where the multiple Grade 1 stakes winner will have the opportunity to produce a career-defining performance in the $3 million Pegasus World Cup Invitational (G1) presented by Runhappy.

Owned by Rick Porter’s Fox Hill Farms Inc., Omaha Beach has been installed as the 7-5 morning-line favorite in a field of 12 entered Wednesday for the ground-breaking 1 1/8-mile stakes for 4-year-olds and up whose participants will race medication-free.

“It’s a great race. It’s interesting with no medication,” said trainer Richard Mandella, whose morning-line favorite drew No. 5 at Wednesday’s post-position draw. “It’s great to be a part of it.”

Omaha Beach was the morning-line favorite for last year’s Kentucky Derby (G1), only to be scratched three days before the race with a throat condition. After undergoing surgery to address an entrapped epiglottis, the son of War Front was given rest and relaxation time before returning to action nearly six month later. The Richard Mandella-trained colt went on to show the same brilliance that had propelled him to victory in the Arkansas Derby (G1) at Oaklawn, finishing off his interrupted 3-year-old campaign with a victory in the Santa Anita Sprint Championship (G1), a second-place finish in the Breeders’ Cup Dirt Mile (G1) and a sensational romp in the Malibu (G1), all at Santa Anita.

Omaha Beach will have the chance to significantly bolster his reputation Saturday before heading off to Spendthrift Farm in Lexington, KY to begin his career as a stallion.

Mandella’s confidence in Omaha Beach is as high as it was on the Road to the Kentucky Derby.

“I thought he was a Triple Crown winner. I can say that now, anybody can, but he was a big healthy horse – except for that throat. I really thought he was strong enough to [win the Kentucky Derby] and healthy and strong enough to continue on, which is the difference between a horse winning the Kentucky Derby and the Triple Crown,” Mandella said. “You’ve got to have the mind and the constitution to take that kind of regimen. He was always strong and such a good minded horse I felt I had the chance.”

Omaha Beach was Mandella’s best shot to add the Kentucky Derby to his Hall of Fame resume, which includes nine Breeders’ Cup victories and a long list of Grade 1 stakes winners, including four-time Eclipse Award champion Beholder, 1993 Horse of the Year Kotashaan, as well as unprecedented success with South American imports, most notably, Gentleman, Sandpit and Siphon.

“What can you do? If you’re going to train horses you better put your seatbelt on. There are going to be rough bumps,” Mandella said.

Omaha Beach, who is “bigger and stronger and continues to fill out,” is the picture of an elite Thoroughbred.

“He’s got all the requirements. Extreme ability, terrific conformation, and a mind you can adjust like a radio,” he said. “You can turn him on, you can turn him off. You deal with those things you can do about anything, which he showed. He won the Arkansas Derby and the next time he ran he wins the Sprint Championship at Santa Anita and beats a really good top sprinter [Shancelot]. There are not many you can tune in and out like that.”

Hall of Fame jockey Mike Smith, who rode Arrogate to a 4 ¾-length victory in the 2017 Pegasus World Cup, has the return mount aboard Omaha Beach.

Hronis Racing LLC and trainer John Sadler, who will send out Higher Power for a run in the Pegasus, got a third-place finish in last year’s Pegasus World Cup from 2018 champion older horse Accelerate, the 3-2 favorite who encountered bumping at the start of the race that was run over a sloppy track and won by City of Light.

“We got a deluge. I think Accelerate handled a muddy track OK, but City of Light adored it,” Sadler said. “He ran a good race. It was a step back for him, but circumstances worked against us.”

Higher Power has blossomed into a Grade 1 winner since being purchased for $250,000 in April at Keeneland’s horses of racing age sale. In his fourth start for his new connections, the 5-year-old son of Medaglia d’Oro offered a commanding 5 ¼-length victory in the Pacific Classic (G1) at Del Mar, defeating Pegasus World Cup contenders Tenfold (4th), War Story (6th) and Seeking the Soul (7th).

“We ran him on turf the first time at Del Mar and he was an unlucky second and should have won. He was training so well over the Del Mar dirt we decided to try the Pacific Classic,” Sadler said. “We were just delighted. He got a good trip and won it. He has a lot of stamina and he’s improving. To my mind, he’s probably second choice in the Pegasus.”

Higher Power was rated fourth in the morning line at 6-1.

Higher Power finished third after poor starts in his two subsequent starts, including the Breeders’ Cup Classic (G1) at Santa Anita Nov. 2.  After starting slowly, he raced wide and could get no closer than 8 ½ lengths to victorious Vino Rosso.

“In the Breeders’ Cup Classic he got away slowly and was third. I think with a good break in the Breeders’ Cup he’d probably have been right there close for second,” Sadler said. “Vino Rosso was going to be the winner that day. But all things considered, it wasn’t a bad race.”

Flavien Prat has the return mount aboard Higher Power.

Trainer Bob Baffert, who saddled Arrogate for his Pegasus World Cup victory has sent His Royal Highness Prince Faisal bin Khalid’s Mucho Gusto to Gulfstream for Saturday’s race. The 4-year-old son of Mucho Macho Man will be seeking his first Grade 1 victory, but the multiple graded-stakes winner has fared well in top-class company, finishing second behind Maximum Security in the Haskell (G1) at Monmouth Park, eight lengths ahead of Pegasus entrant Spun to Run, and third in the Travers (G1) at Saratoga.

“He always shows up. He runs well. He’s got a lot of heart. And he’s speed,” Baffert said. “Might as well go for it and see how he does.”

Irad Ortiz Jr., who is expected to be honored at Thursday evening’s Eclipse Award dinner in Gulfstream’s Sport of King’s theater for the second straight year, will ride Mucho Gusto, who is rated third at 9-2 in the morning line, for the first time Saturday.

Trainer Steve Asmussen, like Baffert, will be seeking his second Pegasus World Cup victory Saturday. The Hall of Fame trainer saddled 2017 Horse of the Year Gun Runner for victory in 2018. This year, he will saddle Winchell Thoroughbreds LLC’s Tenfold, the third-place finisher in the 2018 Preakness Stakes (G1) who is winless in five starts since winning the Pimlico Special (G3).

“He’s run some very big races. His third in the Preakness by three-quarters of a length to Justify, his Pimlico Special and the Jim Dandy. On his best day, he’s obviously capable of very good things, but he has not been as consistent as we would have hoped and don’t feel he’s completely taken advantage of all the chances he’s been given,” Asmussen said. “But he’s also a horse that’s an extremely good ‘doer,’ a very sound horse that’s doing really well right now. With the invitation to the Pegasus in a very wide-open year, excluding possibly one horse, here we go.”

Tyler Gaffalione has the mount aboard the 5-year-old son of Curlin.

Robert Donaldson’s Spun to Run will have the distinction of being the only horse in the Pegasus field to hold a decision over Omaha Beach. The 4-year-old son of Hard Spun defeated the Pegasus morning-line favorite by 2 ¾ lengths with a front-running performance in the Breeders’ Cup Dirt Mile (G1) at Santa Anita Nov. 2.

“Omaha Beach is getting all the hype,” said trainer Juan Carlos Guerrero. “But I’m okay with that. I don’t see why we can’t beat him again.”

Spun to Run followed up his Dirt Mile win with a second-place finish behind Maximum Security in the Dec. 7 Cigar Mile (G1) at Aqueduct.

Hall of Fame jockey Javier Castellano is slated to ride Spun to Run, who is rated second at 7-2 in the morning line, for the first time Saturday.

Charles Fipke’s Seeking the Soul is scheduled to make his third start in the Pegasus World Cup (G1), in which the son of Perfect Soul finished second behind City of Light last year after checking in fifth in 2018. The Dallas Stewart-trained 7-year-old son of Perfect Soul has been winless in four starts since capturing the Stephen Foster (G2) at Churchill Downs June 15.

Hall of Fame jockey John Velazquez, who was aboard for the Foster score and last year’s runner-up finish in the Pegasus, will be back aboard.

R. A. Hill Stable, Reeves Thoroughbreds Racing, Hugh Lynch and Corms Racing Stable’s Tax will seek his first Grade 1 victory in the Pegasus. The 4-year-old gelded son of Arch was claimed for $50,000 at Keeneland in October 2018 and went on to win the Withers (G3) and finish second in the Wood Memorial (G2) at Aqueduct to earn a berth in the Kentucky Derby (G1), in which he finished well back in the field. The Danny Gargan-trained gelding captured the Jim Dandy (G2) at Saratoga before weakening to seventh in the Travers.

Jose Ortiz will ride Tax for the first time Saturday.

Diamond 100 Racing Club LLC, Amy Dunne, D P Racing Stable LLC and Patrick Biancone Racing LLC’s Diamond Oops, a multiple Grade 1 stakes-placed 5-year-old gelding, enters the Pegasus off a swift victory in the seven-furlong Mr. Prospector (G3) at Gulfstream Dec. 21. The son of Lookin At Lucky finished second back-to-back in the Alfred .G, Vanderbilt (G1) at Saratoga and the Shadwell Turf Mile (G1) at Keeneland, before finishing off the board in the Breeders’ Cup Dirt Mile following a troubled start.

Julien Leparoux has the return mount on the Patrick Biancone-trained gelding.

Imaginary Stables and Glenn Ellis’ War Story, who finished 10th in the 2018 Pegasus, will try to add to his $2.9 million career bankroll Saturday. The Elizabeth Dobles-trained 8-year-old gelding, who captured the Harlan’s Holiday (G3) at Gulfstream in his most recent start, will be ridden by Joel Rosario.

Top Racing LLC and Global Thoroughbreds and GDS Racing’s Bodexpress, the runner-up in the Florida Derby (G1) behind Maximum Security before finishing off the board in the Kentucky Derby and unseating his rider at the start in the Preakness, brings a record of two wins from three subsequent starts into the Pegasus. Emisael Jaramillo has the return call.