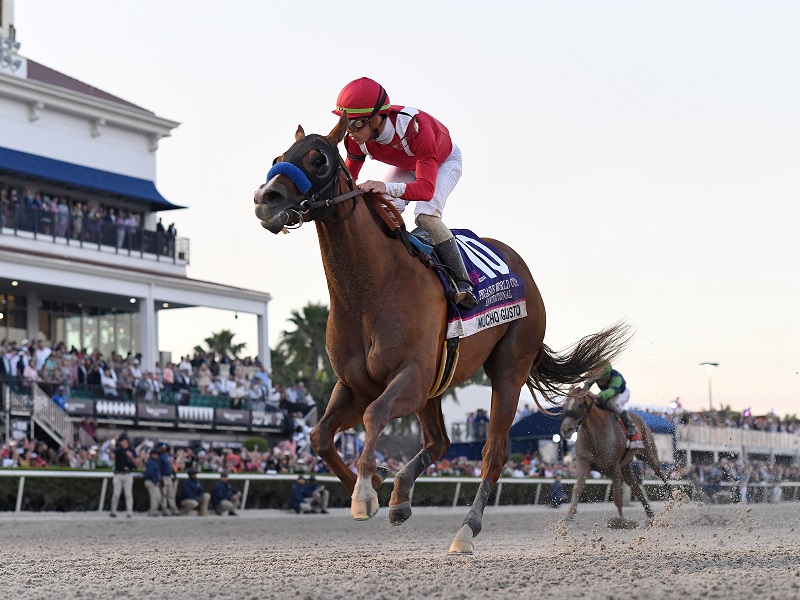 Baffert had previously won the Pegasus with multiple Grade 1 stakes winner Arrogate, who dominated the 2017 edition by 4 ¾ lengths as the 4-5 favorite. Mucho Gusto entered the Pegasus with four graded-stakes wins but had previously finished second in the Los Alamitos Futurity (G1), second in the Haskell Invitational (G1) at Monmouth and third in the Travers (G1) at Saratoga in top-class company.

“Those are the most exciting ones, when you don’t expect it,” said Baffert by phone from California.

Mucho Gusto, who was saddled by assistant trainer Jimmy Barnes, broke alertly and showed the way into the backstretch before Mr Freeze made a three-wide sweep to the lead at the top of the backstretch under Luis Saez. Jockey Irad Ortiz Jr. rated Mucho Gusto behind Mr. Freeze, who cut fractions of 23.77 and 47.78 seconds for the first half-mile under pressure from Bodexpress while showing the way into the far turn. Higher Power, the 5-2 favorite ridden by Flavien Prat, joined the fray briefly but came up empty as Mucho Gusto was eased to the outside on the turn into the stretch. The 4-year-old son of Mucho Macho Man quickly advanced three-wide on Mr Freeze and Bodexpress to take the lead at the top of the stretch, drawing away to a 4 ½ -length victory.

“I had a great trip. He got a great start and felt good. He relaxed so well and we were able to save ground,” said Ortiz, the two-time defending Eclipse champion who rode Mucho Gusto for the first time Saturday. “At the three-eighths pole I tipped him out and he took off. He was much the best. I think he just took off and opened up easy. He’s a nice horse.”

“He has a lot of speed but the key was to get a good break and get over right away. And I just left it up to him (Irad), just keep him in the clear,” Baffert said. “When he was down inside I thought, ‘I hope he knows what he’s doing,’ but he did, he knows that track really well. It was a great performance by him and the horse.”
Mucho Gusto was purchased following his last start, a fourth-place finish at the 4-5 favorite in the Sept. 28 Oklahoma Derby (G3) at Remington Park, by His Royal Highness Prince Faisal Bid Khaled.

“You know what, the horse shipped really well and I wasn’t really planning on taking him there but he worked really well the other day. I was going to run in the San Pasqual [at Santa Anita] next week but after he worked so well, I thought you know what, I’m just going to take a shot at the mile and an eighth and maybe that will get him ready,” Baffert said. “He didn’t get an invite to the Saudi Cup, so I thought maybe if he runs well enough he’ll get an invitation.”

Mr Freeze, a multiple graded-stakes winner who most recently finished third in the Clark (G1) at Churchill Downs, didn’t demonstrated his usual early speed as he broke a step slowing from the gate but recovered quickly to take the lead.

“That was the plan (to go to the front). He didn’t break as clean as I would have liked but he got there and he had a good pace and ran a good race,” trainer Dale Romans said. “He was training as good as a horse can train and he ran huge. I thought he ran a beautiful race. We’ve had confidence in him and he ran the way we thought he would.”
War Story, the 8-year-old veteran who captured the Harlan’s Holiday (G3) at Gulfstream in his last start, ran in the Pegasus for the third time to produce his best finish in the race Saturday.

“He had a good trip. He went back like the way he wants to run and he came running nice in the end,” Rosario said. “I thought for a second we’d get second, but he ran well.”

Favored Higher Power had finished third in the Nov. 2 Breeders’ Cup Classic at Santa Anita in his most recent start.

“We had a good trip. I thought I was in a good position and when the race started to develop by the half-mile pole, he just dropped the bit and sat back,” jockey Flavien Prat said. “I don’t know why.”