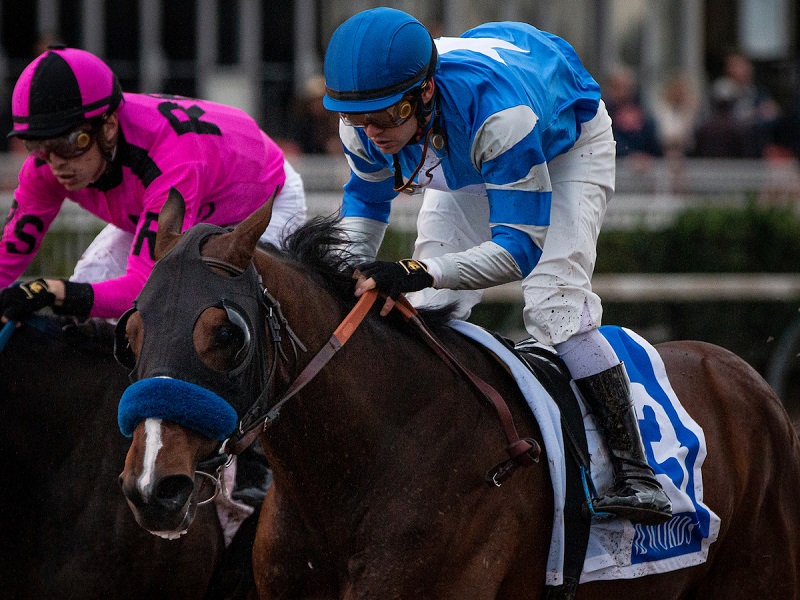 Also prominent are Baffert’s High Velocity, who finished third behind Thousand Words in the Grade II Los Alamitos Futurity and Richard Mandella’s recent maiden winner Tizamagician, who put it all together in a 2 ½ length score going a flat mile here on Jan. 1.

The Lewis winner will receive 10 Kentucky Derby qualifying points, with four to second, two to third and one point to the fourth place finisher.

A first-out 6 ½ furlong maiden winner as the 6-5 favorite here Oct. 26, this $1 million Keeneland September Yearling by Pioneerof the Nile pressed a fast pace over an off track in the Los Alamitos Futurity and emerged with a hard fought neck win in a game effort.  Idle since, he’ll again be ridden by Flavien Prat and it looks like “All systems go,” for his third engagement on Saturday.

A two length first-out maiden winner going 5 ½ furlongs on Oct. 13, he then took the Grade III, seven furlong Bob Hope Stakes on Nov. 16 at Del Mar, going gate to wire and winning by 1 ¼ lengths.  Head and head to the top of the lane with Thousand Words in the Los Alamitos Futurity, this Quality Road colt tired late to be third, beaten 5 ¼ lengths.  He’ll get the first time services of leading man Joel Rosario on Saturday.

Second in four out of his first five starts, this colt by Tiznow, in his fourth consecutive one mile maiden assignment, made short work of seven rivals here on Jan. 1, as he pressed the early pace and went on to an impressive 2 ½ length win under regular rider Victor Espinoza.  With his seasoning, foundation and sharp recent win to his credit, Tizamagician has to be accorded a huge chance in the Lewis on Saturday.