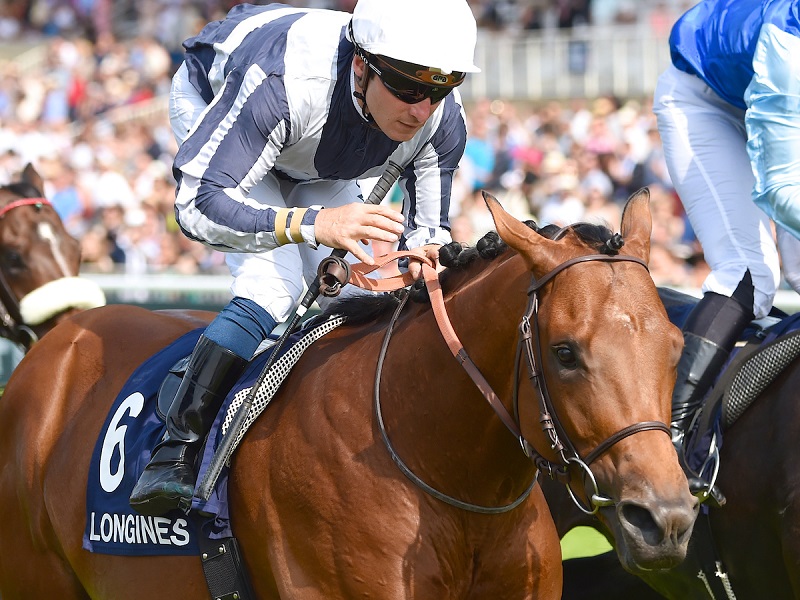 SARATOGA SPRINGS, N.Y. - Niarchos Family's Irish-bred Erupt will be looking for his second Grade 1 win in as many starts as he headlines a diverse field of seven in the Grade 1, $1 million Sword Dancer for 3-year-olds and up on Saturday, Travers Day, at Saratoga Race Course.

One of six Grade 1 races on Travers Day, the 43rd running of the Sword Dancer, contested at 1 1/2 miles, is a "Win and You're In" qualifier for the $4 million Longines Breeders' Cup Turf on November 4 at Del Mar. Carded as Race 10, it is part of an impressive list of stakes leading up the 148th running of the Grade 1 Travers.

Erupt has the distinction of winning both a Group 1 and Grade 1 race, forging his stellar reputation in France, where he won 2015 Grand Prix de Paris. The Francis-Henri Graffard trainee has amassed more than $1.2 million in earnings and made an impression in his North American debut when he bested a nine-horse field comprised of international runners to capture the Grade 1 Pattison Canadian International by one length on October 16 at Woodbine.

Erupt ended his 2016 campaign with a 14th-place finish in the Group 1 Japan Cup. After a freshening, the 5-year-old returned to France to run fourth in the Group 1 Prix Ganay and ninth in the Group 1 Grand Prix de Saint-Cloud last out on July 2. Gaffard said his charge handled the travel well to Saratoga and is ready to make his U.S. debut.

"He seems to have shipped well and has been training well," Graffard said. "The ground was way too soft last time in the Grand Prix de Saint-Cloud, but he had a very good seasonal comeback in the Prix Ganay."

Erupt will have the services of jockey Stephane Pasquier from post 6.

Fellow European shipper Idaho, a full-brother to last year's Breeders' Cup Turf champion Highland Reel, will be making his first start since finishing third behind Ulysses and Enable in the Group I King George & Queen Elizabeth Stakes at Ascot on July 29. That performance came a month after the Irish-bred 4-year-old posted an impressive win in the Group 2 Hardwicke at Royal Ascot.

Trained by Aidan O'Brien, Idaho, who has exceed $1 million in earnings and has won twice at 1 ½ miles, and will have jockey Ryan Moore in the irons from the outside post.

Klaravich Stables and William Lawrence's Money Multiplier leads a strong American-bred contingent. The 5-year-old son of Lookin At Lucky has registered triple-digit Beyer Speed Figures in six of his last seven starts, including a 104 rating after fending off Irish Strait by 1 ½-lenths to win the Grade 2 Monmouth Stakes on July 30.

Trained by Chad Brown, Money Multiplier will be returning to the Spa for the first time since finishing second to stablemate Flintshire in last year's Sword Dancer. The Monmouth victory was the first graded stakes win in 10 starts for Money Multiplier, who was a runner-up in five of those starts, encompassing back-to-back second-place efforts in the Grade 1 Man o' War and Grade 1 United Nations last summer.

"He ran a great race last year in the Sword Dancer and he was a bit unlucky in there," Brown said. "He seems to be training really well, so I'm excited for him to get another chance at it."

Hall of Fame jockey Javier Castellano will leave from post 5.

Woodslane Farm's Sadler's Joy finished third behind fellow Sword Dancer entrants Bigger Picture and winner Hunter O'Riley in the Grade 2 Bowling Green on July 29, getting bested by just a half-length. The 4-year-old son of Kitten's Joy has finished in the money in eight consecutive starts, including a win in the Grade 2 Pan American on April 1 at Gulfstream Park and third-place finishes in the Grade 1 Man o' War and Grade 1 Manhattan this spring at Belmont Park.

"He ran well last time; we only got beat by a half-length," trainer Tom Albertrani said. "Toward the end, he got beat in the last couple of jumps. He made a wide move a little earlier than he needed, but he ran well. He's always right there. He's been training well going into this next race. Hopefully a good trip will get us there."

Sadler's Joy will be coming off a nearly four week rest between starts; an interval Albertrani said should help after the break between the Manhattan, in which he finished 1 ½ lengths behind winner Ascend, and the Bowling Green. The Sword Dancer also returns Sadler's Joy to the track where he broke his maiden last summer.

"We were coming off a six week rest from the last race. If anything, this race should make him a little tighter coming back a little sooner," Albertrani said. "He won on this course last year. He likes Saratoga and has done well up here. Every race, he shows up. We just need it to be his turn."

Hunter O'Riley rallied from seventh to win the Bowling Green, outkicking Bigger Picture in the final jumps to win by a neck. The victory earned him a career-high 104 Beyer for trainer Jimmy Toner.

"He's a hard-knocker; he gives you everything he's got every time he runs," Toner said. "Naturally, we're thrilled with his last race and the effort he gave and hopefully he can duplicate it."

Hunter O'Riley, a 4-year-old son of Tiz Wonderful, has won two of his last three starts.

"As he's gotten older, he's matured and developed and gotten stronger and has more confidence in himself," Toner said. "He's happy and doing well. There's nothing better than a happy horse."

Florent Geroux, who piloted Hunter O'Riley to the Bowling Green win, will have the return call from post 4.

Bigger Picture has improved with age and has registered the two highest Beyers of his career, 104 and 103, in his last two races, featuring a come-from-behind win by a head in the Grade 1 United Nations on July 1 at Monmouth Park before being beaten by Hunter O'Riley at the wire last out.

"Everything is on schedule and we're looking forward to the race," Maker said. "We know he shows up every time. He's there every single race. We expect another big effort on his part. Once we've stretched him out, he's gotten better and better."

"He had a tongue tie come off somewhere between the starting gate and the finish line," O'Neill said about the Bowling Green. "When he came back to get unsaddled, Mario said he just wasn't getting good air out there and my assistant noticed there was no tongue tie on him. It was just a freakish thing. He came out of it physically sound, it's just that that's a big part of his equipment, so we'll hope for a little better luck this time."