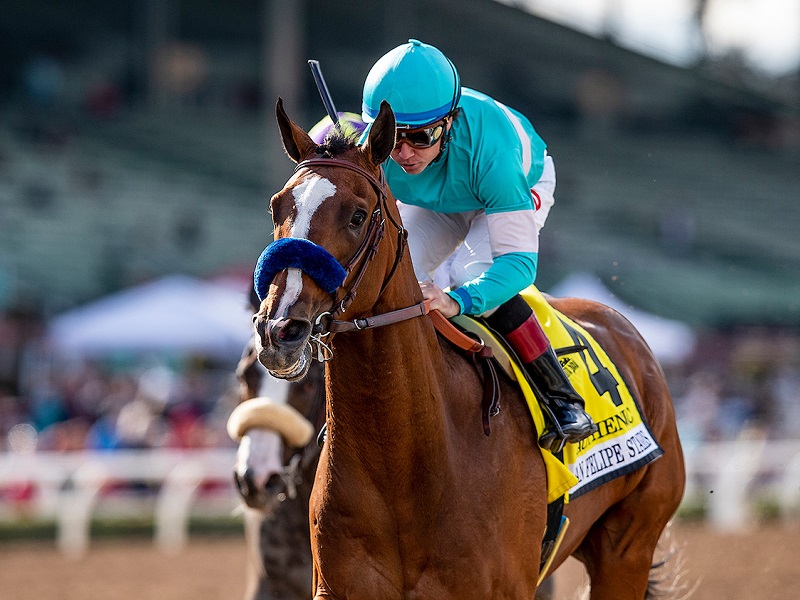 ARCADIA, Calif. (March 7, 2020) — Bob Baffert’s Authentic bounded straight to the lead and dominated his competition throughout in winning today’s Grade II, $400,000 San Felipe Stakes, remaining unbeaten in three starts while projecting himself as the early favorite in the $1 million Santa Anita Derby April 4.  Ridden by Drayden Van Dyke, the Kentucky-bred colt by Into Mischief easily prevailed by 2 1/4 lengths, while getting a mile and one sixteenth in 1:43.56.

Heading to the three furlong pole, Authentic enjoyed a roughly 1 1/2 length advantage over Breeders’ Cup Juvenile winner Storm the Court, while Honor A.P., with Smith up, were in hot pursuit.  Turning for home, it was apparent Authentic had plenty left in the tank and he seemed to find another gear late as he won in-hand with his ears pricked.

Owned by SF Racing, LLC, Starlight Racing and Madaket Stables, LLC, Frederick Hertrich, III, John D. Fielding and Golconda Stables, Authentic, who is out of the Mr. Greeley mare Flawless, picked up 50 Kentucky Derby qualifying points, virtually assuring him of starting berth in the Run for the Roses on May 2.

Honor A.P., an impressive one mile maiden winner on Oct. 13, acquitted himself very well, finishing 3 ½ lengths in front of Storm the Court in a determined effort. Trained by John Shirreffs, Honor A.P. was off at 3-1 and paid $4.00 and $2.80.

Storm the Court, with Joel Rosario aboard, kept to his task but was third best, finishing 5 ½ lengths clear of previously unbeaten Thousand Words. Off at 4-1, Storm the Court paid $2.80 to show.

DRAYDEN VAN DYKE, AUTHENTIC, WINNER: “Beautiful trip. He took a little tiny stumble out of the gate, but it wasn’t enough to cost us. I was just in cruise control. I was seeing if anybody was going to test me to make me pick it up.

“I kept him going a few times, just to keep him focused, but he got off amazing and it seems like there’s more in the tank.

“I think he’s just getting more mature himself; that was his first time going two turns.”

MIKE SMITH, HONOR A.P., SECOND: “I’m very proud of him, and I thought he ran extremely well. We were a bit behind coming in because he bruised his foot earlier, about a month and a half or two months ago. So we missed some time with him, but I thought if I could finish within a couple lengths of whoever won it today, then that would be a really good effort, and if I was to win it, that would be incredible. I was very happy with this effort, and he should move forward off this. He should have a better kick next time, so we’re excited.

(On his maturity and progress toward the Kentucky Derby): “He’s an intelligent horse. Early on, I think a lot of it was that he’s just a big old colt and likes to play a lot and wants to rear up and do all that, but he’s starting to mature a whole lot and listening to what we’re trying to get him to do. So far, so good. He’s just getting smarter every race.”

BOB BAFFERT, AUTHENTIC, WINNER, AND THOUSAND WORDS, THIRD: “He stumbled a little bit leaving there, and I anticipated that, but he’s so quick on his feet. Once he got him around the turn—I know they were going quick and I knew Thousand Words was closer, and I probably learned a lot from him; he doesn’t want to be that close. He sort of flattened out at the end. I was disappointed with him.

“But when I saw the fractions, 22 and change, it was fast, but he was doing it so easy. The really good one do that and I just love the wah her looked down the backside. Turning for home I saw Mike Smith coming with that good horse (Honor A.P.) and I said, ‘We’ll see what he’s made of’ and I was hoping he wouldn’t do his shenanigans (ducking in).

“But he handled it well and he wasn’t tired. He’s a special horse and this was probably one of the toughest prep races that we’ve seen so far. Those were really good horses in there. We hope to stay healthy and run in the Santa Anita Derby (April 4). He’ll stay here and run in that and I’ll figure something out with Thousand Words.

“Drayden (Van Dyke) has been doing a magnificent job on him and I’m happy for him. I’m happy for the groom; a lot of sweat and hard work goes into these things and we are fortunate to find a horse like this.”

On wearing earplugs: “I don’t want to give my secret away. That’s what calmed American Pharoah down. He was the same way, some horses are just really delicate to sound so we put em’ in it and it seemed like it worked. I don’t like to compare my horses; one race at a time. We still have a long way to go, but what I saw today, t you want to see him doing it as easy as he did. He looked like he was enjoying himself out there. I have to just keep him at this level until the first Saturday in May.”

JACK WOLF, AUTHENTIC, PART-OWNER WINNER: “On top of the way he tucked in in the last race, Bob seems to have it solved. I was sitting next to Bob during the race and when I saw the .22 and .44 I thought they were too quick and he said he’s doing it easy.”

NOTES: This Was Baffert’s seventh San Felipe win, adding to his record of six previously.