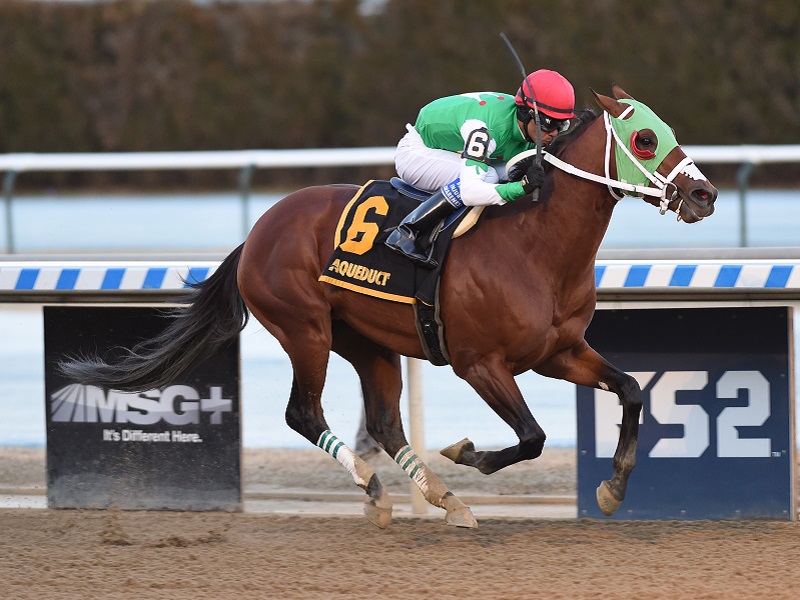 Owned by Cash is King Stable and LC Racing and bred by WinStar Farm, Mischevious Alex entered off a 9 3/4-length victory in the Parx Juvenile in November before starting his sophomore campaign by capturing his graded stakes bow by seven lengths in the Grade 3 Swale on February 1 at Gulfstream Park.

Making his first start at a NYRA track, the Into Mischief colt sustained his momentum, tracking the early speed in fourth position as War Stopper led the 11-horse field through an opening quarter-mile in 23.54 seconds and the half in 47.26 on the fast main track.

Under jockey Kendrick Carmouche, bidding for his third win on the day's 10-race card, Mischevious Alex was urged up and took command entering the stretch. Staying near the rail, the 8-5 favorite repelled Untitled's stretch-drive bid from the outside, completing the one-turn mile in 1:38.80.

Mischevious Alex improved to 3-for-3 since trainer John Servis added blinkers. It also marked the second stakes win Servis and Carmouche teamed for on the afternoon, joining Diamond King's effort in the $125,000 Stymie in Race 7.

"It was a great day for us. He handled the next step up really well and gave us a solid effort today," said Servis, whose only previous starter in the Kentucky Derby was a winning one with Smarty Jones in 2004. "We'll see how he comes out of this and Chuck [Zacney, Cash is King] and the other partners and I will discuss what's next. Ever since we put the blinkers on him, everything that we've handed him, he has handled very well."

Offering 50-20-10-5 qualifying points towards the "Run for the Roses" on May 4 at Churchill Downs to the top-four finishers, Untitled edged Attachment Rate by a head for second. Montauk Traffic picked up the five points, finishing a half-length ahead of Necker Island.

All three of Mischevious Alex's previous wins have come in sprints. But Carmouche, who had the call aboard the $140,000 purchase at the 2019 Ocala Breeders' Sale for the first time, piloted him to his first win at a mile to register his first Gotham win.

"John pretty much told me this horse can do anything," Carmouche said. "He sits pretty good or can go to the lead. He told me the horse is a rocket out the gate, so the best thing that I can do is to take advantage. He left out of there running and I didn't want to panic. I wasn't in a rush. I thought I had the best horse in the race, so I wasn't in a hurry. I was pretty confident in my horse and John. He just told me to ride the way I feel and win the race."

"We'll discuss it, but as long as he comes out of it well, I think it's worth taking a shot," Servis said.

Untitled, fourth in the Swale before running second against optional claimers last out at Tampa Bay Downs, earned stakes blacktype for the first time in his career.

"I thought he ran very well," said Untitled jockey Junior Alvarado, who won earlier in the day aboard Mind Control in the Grade 3, $200,000 Tom Fool Handicap. "We were a little bit wide, but we drew the 10 post, so we didn't have a lot of choices. He ran a great race. When I asked him, he gave me what he had, and he ran on to the wire. He held on pretty well for running three times in a month.

"If they want to run in the Wood Memorial, it will give him a chance to get strong again," he added. "The way he ran today, he should have no problem with two turns. He's a kind horse. He will do whatever you want."

"I had a good trip. He broke well but I think more distance will be better for him," said Attachment Rate rider Luis Saez. "He was travelling pretty good but when we came to the top of the stretch he was a little intimidated because he was inside. But once he got clear he started running again. He's still young and improving. I think he will be all right."