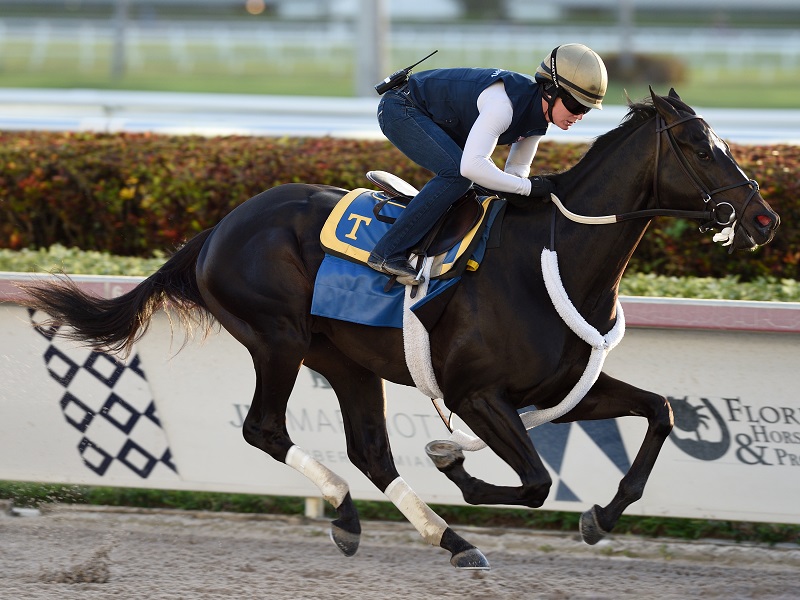 The 69th running of the 1 1/8-mile Florida Derby for 3-year-olds anchors a blockbuster program featuring 10 stakes, six graded, worth $1.825 million on the final Saturday of the 2019-2020 Championship Meet.

It was the fifth work for the son and grandson of Florida Derby winners Constitution (2014) and Cape Town (1998) since suffering his first loss in four career starts when second to Sole Volante in the Sam F. Davis (G3) Feb. 8 at his winter base of Tampa Bay Downs.

“We’re certainly pleased with the horse in all respects,” Eclipse’s California-based managing partner Aron Wellman said. “I spoke to Mike and I spoke to Sarah; both of them were extremely pleased with the breeze. He had had his serious workout the week before last when we really put some air into him going seven [furlongs] and out a strong mile. All he needed this morning was a little maintenance move to sharpen him up.”

The connections were particularly pleased with the way Independence Hall took to Gulfstream in his first spin over the surface, as well as the way the Kentucky-bred colt continued on in his gallop out.

“Mike was very happy and Sarah executed the plan to precision. Sarah thought that Independence Hall really appreciated the surface at Gulfstream this morning,” Wellman said. “It’s a mixture of dirt and sand compared to what he’s been on all winter at Tampa, which is pure sand. Sarah was of the opinion that he got a hold of this surface better than how he’s been handling Tampa. That’s no knock on Tampa’s surface – it’s a great surface and he had a really good winter there. With the big goal being the Florida Derby right now ahead of us, we’re pleased to hear that Sarah believes that he really bounced over this surface nicely today.

“I thought that the body of the work itself was very, very sharp and just what we wanted to see, especially for a young horse like him going by himself,” he added. “I thought from the wire to the mile-pole and then from the mile-pole to the seven-eighths I thought it was probably the best part of his work. He really started to find his stride and it seemed like he had a lot of energy galloping out, and that’s exactly what Mike was looking for this morning six days out from the Florida Derby.”

At Palm Meadows, Gulfstream’s satellite training facility in Palm Beach County, Sackatoga Stable’s Grade 1 winner Tiz the Law put in his final breeze for the Florida Derby with a five-furlong move in 1:02.65 over the main track for trainer Barclay Tagg.

“I talked to Barclay and he said that the track was really, really dull, particularly on the front side where the finish line is, but he galloped out great and we’re ready to go, hopefully, on Saturday,” Sackatoga’s managing partner Jack Knowlton said.

“We’ve been pointing for this race for eight or nine weeks now. This was the plan,” he added. “He had that little foot bruise back several weeks ago and that’s well, well behind us. We got the works in we wanted, which you can see. He’s fit and we’re anxious to get a chance to run, because nobody knows when the next chance is going to be.”

Winner of the Feb. 1 Holy Bull (G3) at Gulfstream in his 3-year-old debut and first start since a third-place finish in the Kentucky Jockey Club (G2) Nov. 30, Tiz the Law is expected to be favored in a field that could also include Feb. 29 Fasig-Tipton Fountain of Youth (G2) winner Ete Indien; Ajaaweed, second in the Remsen (G2) and third in the Sam Davis; As Seen On Tv, third in the Fountain of Youth; and the Todd Pletcher-trained Gouverneur Morris, second in the Breeders’ Futurity (G1), Fountain of Youth runner-up Candy Tycoon and Gulfstream maiden winner Palm Springs.

Frank Calabrese’s Disc Jockey, most recently second in the seven-furlong American Fabius Feb. 17 at Gulfstream, is also being pointed to the Florida Derby. The Saffie Joseph Jr. trainee worked five furlongs in 1:01.49 at Gulfstream Sunday.

Also among a bevy of workers for Joseph Sunday at Gulfstream was undefeated 3-year-old filly Tonalist’s Shape, scheduled to make her next start in the $200,000 Fasig-Tipton Gulfstream Park Oaks (G2) on the Derby undercard.

“She had a good work. We weren’t looking for much. We just put her with a horse that we thought would just get around there and not make her overdo it, and she did it the right way. She went well,” Joseph said. “It was a solid work for her. We’re happy with where she’s at. She’s done good. She’s shown a lot of energy, so we’re excited to run her this week.”