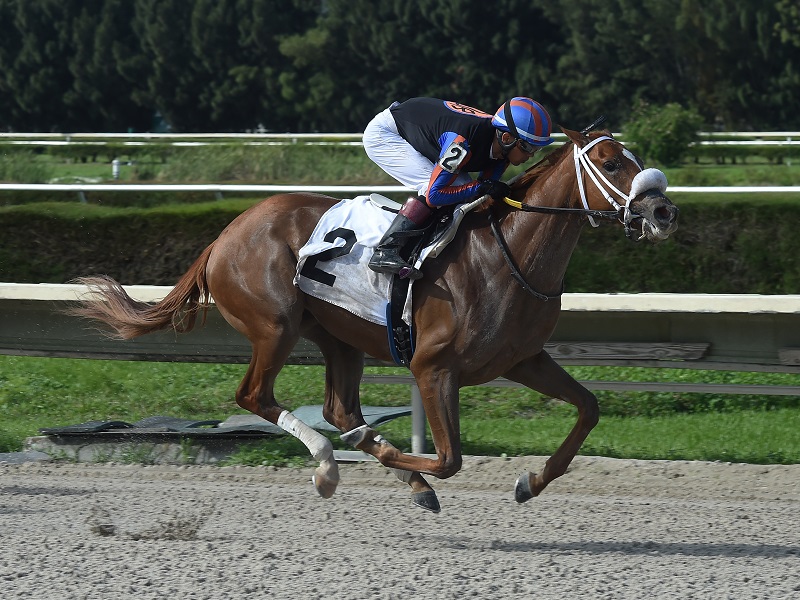 Fans can live stream the action at www.gulfstreampark.com and also watch and wager at www.xpressbet.com and www.1stbet.com.

Based at Gulfstream with trainer Saffie Joseph Jr., Tonalist’s Shape has won all five of her career starts starting with her Sept. 28 debut last fall. Each of her last three wins have come in stakes during the 2019-2020 Championship Meet – the Nov. 30 Hut Hut, Feb. 1 Forward Gal (G3) and Feb. 29 Davona Dale (G2).

Since the Davona Dale was added to the calendar in 1988, the only horse to win all three of Gulfstream’s winter graded-stakes for 3-year-old fillies is Glitter Woman in 1997. The Oaks was renamed in 2011 after being run as the Bonnie Miss from its inception in 1971.

Bshaprsonata (2008), Onlyforyou (2014) and Cathyrn Sophia (2016) each had a chance to complete the sweep after winning Forward Gal and Davona Dale, but none ran in the Oaks. Onlyforyou was retired after the Davona Dale with a perfect 4-0 record, while Cathryn Sophia went on to win the Kentucky Oaks (G1).

Dame Mysterieuse (1981), Unaccompanied (1983), Miss Oceania (1984) and Lucy Manette (1985) all won the Forward Gal and Oaks before the Davona Dale was introduced. Nine other fillies have won two of the three legs in the series including two-time champion and Hall of Famer Open Mind in 1989 and 1999 Breeders’ Cup Juvenile Fillies (G1) winner Cash Run in 2000, both trained by D. Wayne Lukas.

“Just to be in that company is very nice. I never thought about [a sweep],” Joseph said. “That would be a good resume to follow. It’s an honor just to have a filly with this ability.”

Tonalist’s Shape, by 2014 Belmont Stakes (G1) winner Tonalist, sprinted to wins in each of her first two starts, including an October trip to Gulfstream Park West, before stepping up into stakes company in the one-mile Hut Hut, where she took over the lead after six furlongs and went on to a nine-length romp.

“For me, her coming out race was the Hut Hut on opening day at Gulfstream. In that race, she showed that she was legit, to me,” Joseph said. “We just hope that she keeps doing what she’s been doing – winning. You would think she would get better with the longer distances and this time she gets to go two turns. We just hope she continues her natural progression so far.”

Tonalist’s Shape stalked again before pouncing and sprinting clear to a 3 ¾-length triumph in the seven-furlong Forward Gal, then found herself on the lead and pressed for a half-mile until asserting her class and forging a 1 ¼-length score in the Davona Dale, also at one mile. The race was the first time since her debut when she wasn’t favored.

“She seems to be getting better with each race and she keeps winning, which is the important thing. She does it all different ways. Last time was the first time she was on the lead the whole way,” Joseph said. “She just shows that she has different dimensions. She can do it from behind, she can do it from in front, and that’s a good attribute to have.”

Tyler Gaffalione, up for the Davona Dale, rides back from Post 9. All fillies will carry 122 pounds.

Robert and Lawana Low’s Spice Is Nice went off as the favorite in the Davona Dale, despite it being just her second career start and first against stakes competition following a 12-length maiden score Jan. 12, also at Gulfstream. She finished a solid and decisive second, 2 ¾ lengths ahead of Dream Marie in third.

“I thought she ran well last time. She was still a little green and it was a lot to ask for her to jump from one start to a graded-stakes,” trainer Todd Pletcher said. “She was giving up a little seasoning but I think she learned a little something and I think two turns is really what she’s wanting. We’ve always felt that more distance, two turns, was going to be what she’s best at, so we’re looking forward to doing that this time.”

Hall of Famer Javier Castellano will be aboard the daughter of two-time Horse of the Year and 2014 Hall of Famer Curlin from Post 5.

“We’ve had very high hopes for her all along,” Pletcher said. “She delivered with a big debut and was still running on at the end in her stakes debut, so we’ll hope that the stretchout brings her forward again.”

Pletcher will also be represented by Eclipse Thoroughbred Partners and Abbey Spearman’s Mrs. S, a front-running 2 ¼-length maiden winner going 1 1/8 miles Feb. 16 at Gulfstream. The Creative Cause filly had been second or third in three of her first four races dating back to last fall prior to graduating. Hall of Famer John Velazquez rides from Post 10.

“She’s a filly that’s very talented and we’re hoping that she’s starting to come around mentally as well and putting it all together,” Eclipse managing partner Aron Wellman said. “The two turns will be no problem for her. She won going two turns at Gulfstream. We’d rather have a little bit softer landing for her, but she’s a quality filly with a lot of potential. If we could pick up some graded black type we’d be ecstatic.”

Edward Seltzer and Beverly Anderson’s homebred Lucrezia makes the jump in distance and class in the Oaks, off back-to-back stakes scores at Tampa Bay Downs. The Into Mischief filly scored by 1 ¾ lengths in the six-furlong Sandpiper Dec. 7 to cap her 2-year-old season, then opened 2020 with a five-length decision in the one-mile, 40-yard Suncoast Feb. 8.

A front-running maiden winner going 5 ½ furlongs on turf last fall at Keeneland, Lucrezia has shown the ability to sit off the pace and come running in her two most recent efforts. Julien Leparoux has the assignment from Post 7.

“That’s the fun thing with her, it looks like she’s got a lot of tactical speed but she can rate also. And she can be efficient on dirt or turf, so we were looking forward to a good summer with her,” trainer Arnaud Delacour said. “Not sure what’s going to happen but, hopefully, we can run on Saturday and figure her out a little bit more.”

Delacour had initially targeted the Ashland (G1) but had to change course after Keeneland canceled its spring meet. She enters the race off successive bullet works at Tampa, the most recent a five-furlong move in 59.80 seconds March 22, fastest of 22 horses.

“I really like her. She breezed terrific last weekend,” he said. “We had planned to go to the Ashland with her so we kind of timed it for that. I wish that I could have breezed her one more time, but I was very happy with how she did the other day.”

Peter Callahan’s Swiss Skydiver will make her third start of the year and second straight in graded company in the Oaks. A maiden winner in debut last November, she was most recently third in the 1 1/16-mile Rachel Alexandra (G2) Feb. 15 at Fair Grounds.

“She’s a really good filly. We’re really excited about her,” trainer Ken McPeek said. “She ran a good third at Fair Grounds and we’ve given her plenty of time since. She’s had a good work at Gulfstream since and she’s set to fire. I think we have a big shot.”

Second in a pair of turf stakes after being claimed for $50,000 out of a win on dirt last May at Gulfstream, David Staudacher’s Sunset Promise will get another shot on the main track in the Oaks. In her last start, the daughter of Broken Vow was sixth following a wide trip though beaten just three lengths in Gulfstream’s 1 1/16-mile Herecomesthebride (G3) Feb. 29.

“She’s run some good races, she just hasn’t gotten paid for it [with wins],” trainer Mike Maker said. “The owner was looking to try her on the dirt. We claimed her out of a dirt race but we felt we were claiming a two-turn turf horse so that’s the direction we took. There’s very limited opportunities right now so we want to run while we can.”