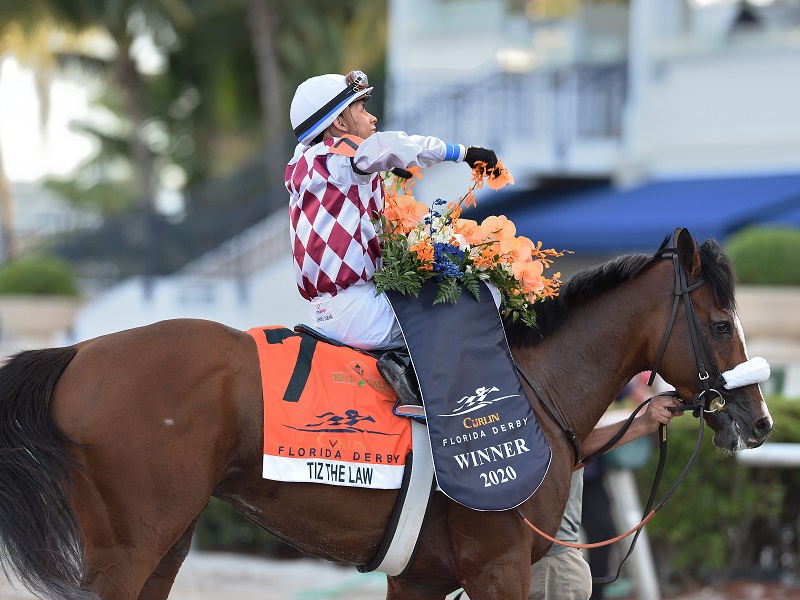 “All we know is that we’ve got a horse that’s very special, and it’s pretty exciting for us. Unfortunately none of us could be there today. We were all watching it on TV from coast to coast,” said Knowlton, who couldn’t be in attendance due to health and safety protocols that prohibited spectators, even owners, from attending Saturday’s races.

Sent to post as the 7-5 favorite on the strength of an impressive three-length victory in the Holy Bull (G3) at Gulfstream Park Feb. 1, Tiz the Law sat a few lengths off the early pace set by Shivaree, an 80-1 long shot ridden by Emisael Jaramillo, and pressed by Ete Indien, the Feb. 29 Fasig-Tipton Fountain of Youth (G2) winner and 5-2 second choice ridden by Florent Geroux.  Shivaree showed the way around the first turn and along the backstretch while setting fractions of 23.75 and 47.95 seconds for the first half-mile of the 1 1/8-mile stakes. Tiz the Law advanced on the leaders on the far turn and was taken three wide on the turn into the homestretch, before speeding past a gritty Shivaree and Ete Indien and drawing away to a comfortable victory.

“I want to give all the credit to the horse. He broke out of there perfectly, like a shot, and I was able to let the horse on the outside clear me and I ended up in a great position,” Franco said. “I sat third and I just thought about waiting for the right moment, and I was happy by the five-sixteenths pole. All the time when I called on him a little bit, he was there for me.”

Shivaree, who had finished second in the seven-furlong Swale (G3) and six-furlong Hutcheson in his two most recent races, held gamely while stretching out around two turns to prevail over Ete Indien by three-quarters of a length. Gouverneur Morris finished a neck back in fourth under John Velazquez.

Jack or Better Farm’s Shivaree was racing without blinkers for the first time in nine starts.

“He’s one tough little fella, that’s all I can say,” trainer Ralph Nicks said. “There’s not many times when he doesn’t show up. He’s got speed, so we weren’t going to take him away from that if he broke well, and he broke well. The winner was awesome.

“I was very impressed, but I’ve been impressed with everything he’s done,” Tagg said. “He just surprises me, everything he does. He just kind of rises to the occasion and does it with aplomb.”

Shivaree’s alert beginning and early speed prevented Ete Indien from getting the early lead, as he did while winning the Fountain of Youth by 8 ¼ lengths.

“I kept him second, I was really happy with that,” Geroux said. “He was a little more aggressive than I wanted. I’m not sure it cost me the win, but maybe second.”

Tiz the Law broke his maiden at Saratoga by 4 ½ lengths last August, two month before capturing the Champagne (G1) at Belmont Park. He sustained his first loss while finishing a troubled third in the Kentucky Jockey Club (G2) at Churchill Downs in November but rebounded with his impressive score in the Holy Bull.

The New York-bred colt vaulted to the top of the Kentucky Derby qualifying standings with 122 points after earning 100 points Saturday. However, Knowlton and Tagg will have to wait until Sept. 5 to see if Tiz the Law will follow in the footsteps of Funny Cide due to the coronavirus pandemic that forced the postponement of the Run for the Roses.

“He is something special. It would be a lot of fun going to Kentucky in five weeks, but that’s not happening, obviously,” Knowlton said. “Now we get to run some more races. Maybe the Wood will come back in play. Maybe we can do a Travers-Derby double. Right now it’s a blank slate. Nobody knows what’s going to happen where or when with all that’s going on in the country.”