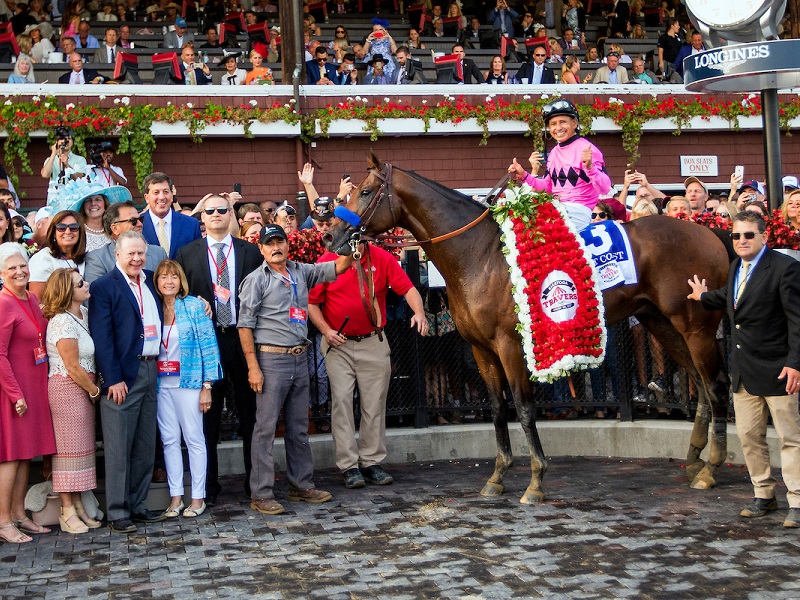 Mike Smith winning rider aboard West Coast (No. 3): "They said, 'listen, you ride him however you want, and he'll put a big effort,' and that means I could do whatever I wanted. Just off of the way it looked, I said I was going to get aggressive leaving here, and see where it puts me. If it's not in front, it puts me in the race, and I'm happy with that. I thought there wasn't much pace, but man, I caught a good jump, put him on the lead, and he just cruised from there. He was a happy horse all the way around there. There was a time or two when they came to me, but he just put them away, and every time they would he'd take a big old breath of air, so I felt confident he'd continue to run well.

Antonio Sano, trainer of runner-up Gunnevera (No. 11): "I thought my horse should stay up, sure, and there should be no change in the result. As far as the horse [Irap, No. 10], he was way back, so it wouldn't have made a difference. Gunnevera ran very good, very good. I am very proud of him. It was a really good race. We expected first place when we came in, but we're happy with his race. He [Edgard Zayas] did a very good with the run, and we're happy with it. We're going to rest and take him to the Breeders' Cup [Classic]. l will take the horse back to Florida and not run him until then. He'll just train up to the Breeders' Cup."

Edgard J. Zayas, jockey aboard runner-up Gunnevera (No. 11):"He ran a huge race. The plan was to stay back. I wanted to just go following Girvin and McCracken and try to make a run with them, but they were gaining so much ground, so I swung on the outside and made a run with him and he ran a huge race really. I'm very proud of him."

Mario Gutierrez, jockey aboard third-place finisher Irap (No. 10): "It was a good. There was a little bit of an incident in the stretch but beside that I had a pretty good trip. He was a little bit rank today but nothing unusual. He was pretty good. [Gunnevera] did push me down, but I guess the stewards didn't think it was enough to cost me my place, but who knows?"

Todd Pletcher, trainer of fourth-place finisher Tapwrit (No. 4) and ninth-place finisher Always Dreaming (7): "I thought Tapwrit ran really well and kind of finished steadily and didn't have that big burst at the end that we needed. I thought he put forth a good effort. Always Dreaming, he kind of came off the bridle at the half-mile pole. I can't offer much excuse."

Jose Ortiz, jockey aboard fourth-place finisher Tapwrit (No. 4): "I loved where I was early in the race. Todd [Pletcher] told me to try and ride him like I did in the Belmont, and that's what I tried to do. Give him the same kind of trip. West Coast was gone at the quarter pole and Gunnevera was, too. They stayed steady and my horse stayed steady, too. He didn't give me a little kick in the end. I think my trip was perfect. He broke well, sharp. He put me into a good position going into the first turn. I didn't have to check him. I took back little bit and followed West Coast all the way around. I was pleased with my trip. He was just a little flat in the last part."

Bill Mott, trainer of fifth-place finisher and beaten favorite Good Samaritan (No. 5): "We got off to an okay start but the horse dropped an awful way back. He made a huge run towards the end, but he was just a little too far back to get up there."

Joel Rosario, jockey aboard fifth-place finisher and beaten favorite Good Samaritan (No. 5): "He broke OK and he was fighting a little bit to hold my position. He was back more than I wanted him to be. He put a nice run in the end but I think he had a little too much to do. They kind of got away from him."