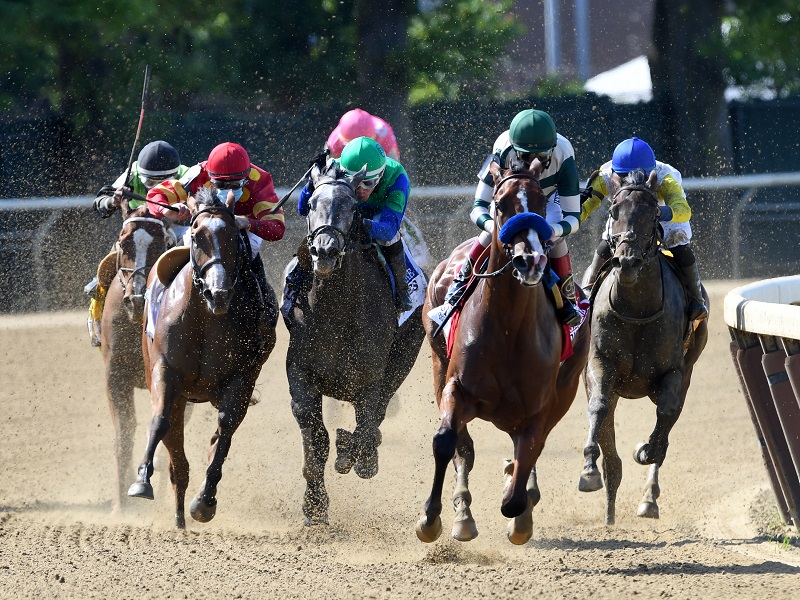 ELMONT, N.Y. - Michael Lund Petersen's Gamine took social distancing directives to heart, ensuring none of her six competitors would get anywhere close in the stretch en route to an 18 ¾-length domination of the Grade 1, $300,000 Longines Acorn for 3-year-old fillies on Saturday at Belmont Park.

Two-time Triple Crown winning trainer Bob Baffert is used to Belmont Stakes Day providing special moments. Though the Hall of Fame conditioner does not have an entry in this year's American Classic, he added another race-for-the-ages moment to his resume, as Gamine led the seven-horse field wire-to-wire, completing the course in 1:32.55 that was the fastest of the 90 editions of the Acorn and just off Najran's track record of 1:32.24 set in May 2003.

The Into Mischief filly earned 50 qualifying points to the Grade 1 Kentucky Oaks in September at Churchill Downs, as the Acorn awarded a 50-20-10-5 point structure to the top-four finishers.

Under Hall of Fame John Velazquez, Gamine broke well from the inside post and set fractions of 22.48 seconds for the opening-quarter mile and the half in 45.28 with Lucrezia in close pursuit.

Out of the turn, Gamine quickly drew away and went the final quarter-mile in 23.22 seconds to cap a highly impressive stakes debut. She improved to 3-for-3 after starting her career with a 6 ¼-length score in March at Santa Anita and winning at 1 1/16 miles in May at Oaklawn Park.

"It was an amazing race out of her," Baffert assistant Jimmy Barnes said. "Especially coming into a Grade 1 and for it being only her third start.  Johnny rode her right to the way we told him to go. We told him to take advantage of her position and he certainly did.

"I wanted to see her run the one turn just because of the way she runs," he added. "Two turns, one turn, she can handle either one. We'll go home, give her a little time and see what's next for her. I can imagine something at Saratoga."

"She was very good. Nice ride. She did everything I wanted her to do," said Velazquez, whose fifth win in the Acorn tied fellow Hall of Famer Mike Smith for most in the race among jockeys. "She's a little bit on the aggressive side, but I let her relax around the backstretch. Once we got to the five-sixteenths pole I let her run. By the quarter-pole she opened up so quickly I had to look back. She's very nice and professional. I wish they were all that easy."

Gamine came into her sophomore campaign high expectations, being purchased for $1.8 million at the 2019 Fasig-Tipton Midatlantic 2-year-old sale. She has lived up to that billing so far, unblemished competing at three different on three different tracks.

"Bob does a great job at this," Barnes said. "He buys a very good horse and it makes it a lot easier to get the job done like this.

"I'm very pleased with the way she ran," said Pleasant Orb jockey Manny Franco. "The winner was very classy. She can run."

Water White, who netted 10 Oaks points, has finished on the board in her last three starts, all against stakes company.