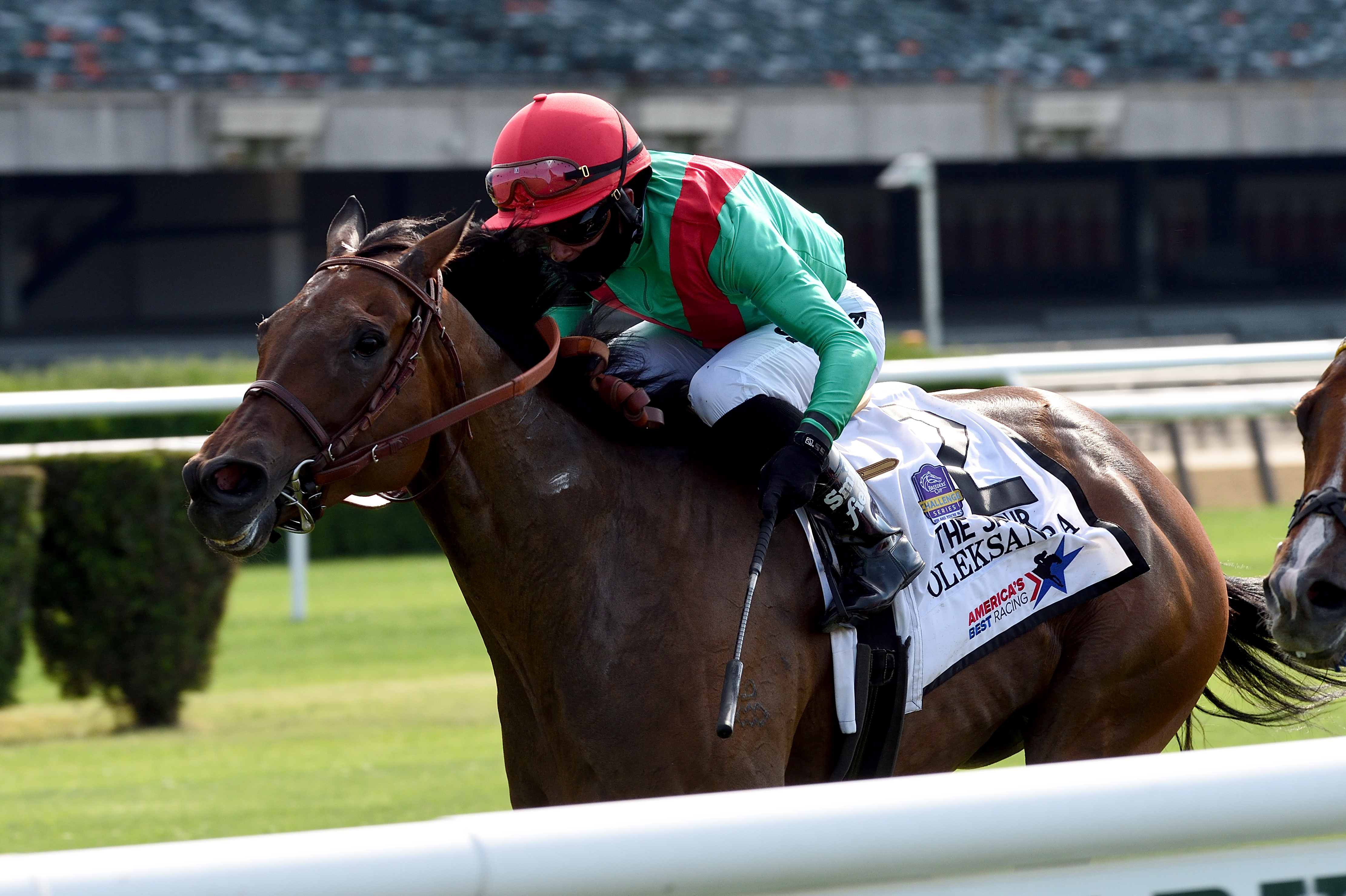 ELMONT, N.Y. - Serving as a prelude to the Grade 1 Belmont Stakes one race later, the Grade 1, $250,000 Jaipur presented by America's Best Racing provided plenty of excitement in advance of the first American classic run this year, with the 6-year-old mare Oleksandra storming down the stretch of Belmont's inner turf course to edge a dead-game Kanthaka in a thrilling finish.

Oleksandra's victory in the 'Win and You're In' Jaipur, run at six furlongs for older horses, will assure her an all-expenses paid trip to the Grade 1 Breeders' Cup Turf Sprint in November at Keeneland.

The lone mare in a field of eight turf sprinters, Oleksandra was off slowly under Joel Rosario and, as is her typical style, was content to sit at the back of the pack. The talented Hidden Scroll broke sharply and went immediately to the front but was joined in short order by speedball Pure Sensation, who was off a step slow but still flashed his customary early zip in his 9-year-old debut.

The leading duo battled through taxing splits of 21.33 seconds for the opening quarter-mile and 43.62 for the half with Stubbins and Texas Wedge assuming a stalking position in third and fourth, respectively. Oleksandra, meanwhile, was a dozen lengths off the frontrunners down the backstretch and continued to trail the field around the turn.

As the octet of turf sprinters entered the stretch, Stubbins was the first to take aim at the pacesetters, which in turn set off a chain reaction of horses inheriting the lead only to relinquish it a short while later. Texas Wedge was next in line, grabbing the bull by the horns at the top of the stretch, but he was confronted shortly thereafter by Kanthaka, and the two proceeded to duel head-and-head at the eighth pole.

Kanthaka, who was making his first start in more than a year in the Jaipur, put away Texas Wedge inside the sixteenth pole and looked home free, but he was the last domino to fall as Oleksandra and Rosario came with a relentless rally to get up to win by a neck in the shadow of the wire.

"Coming out the gate, the horse to the inside [Kanthaka] got me a little bit," said Rosario. "I just let her be there, which she likes to do. She put up a great performance and did well in the end. She's an amazing horse. I'm very grateful that the connections have given me the opportunity to ride her.

"The fast pace was probably why I was further back, but she came with a great run in the end," he added. "We do well together. You just need to understand her and what she wants to do during the race."

Trained by Neil Drysdale for Team Valor International, Oleksandra completed the distance in 1:06.80, just milliseconds off the track record of 1:06.74. The win was her first Grade 1 victory and also upheld her unbeaten streak over the Belmont turf, which now stands at three. She picked up the winner's share of the purse of $137,500, which increased her lifetime earnings to $537,353, and returned $6.50 to win as the tepid 2-1 favorite.

"She had been training really well into this race," said Drysdale. "She is so much fun to watch race. She makes life very exciting. At Santa Anita, going five and a half furlongs, it's very difficult to run down speed. We were pleased with the way she ran and that's why we sent her to Belmont."

West Point Thoroughbreds' Kanthaka ran a gallant race in defeat to finish second, 1 ¼ lengths in front of Texas Wedge, who was three-quarters of a length ahead of Stubbins. White Flag, Lonhtwist, Pure Sensation and Hidden Scroll completed the order of finish.

"I think my horse got a good trip and ran very good," said Jose Ortiz, jockey aboard Kanthaka. "The winner was very impressive. I knew she was going to come sooner or later, but I thought I had her. My horse never stopped running. We were just unlucky to be second-best. I don't think we have any excuses."

As for Oleksandra's next assignment, Drysdale couldn't say; one thing he does know for certain, however, is where she'll make her 2020 swan song.

"We'll have to discuss [her next move] with Mr. Barry Irwin. Obviously, her final call of the year would be the Breeders' Cup at Keeneland, and she's won there before," said the trainer.