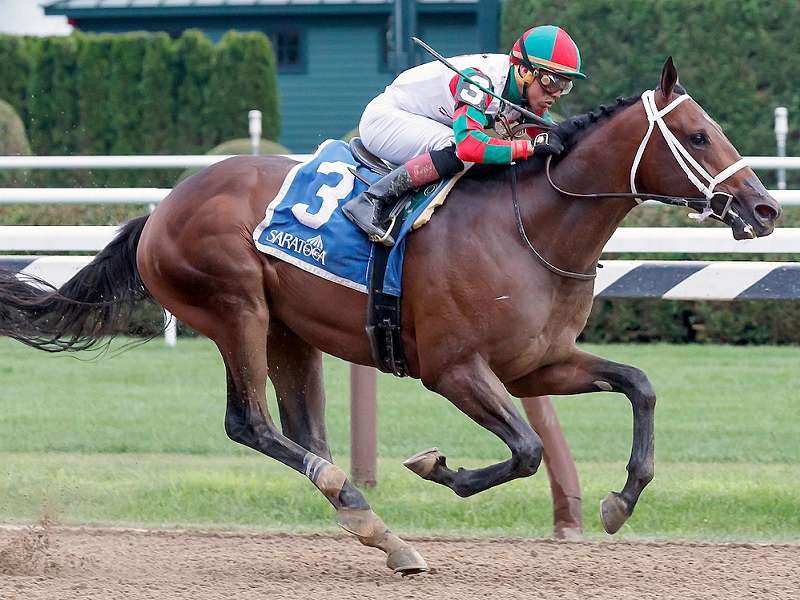 SARATOGA SPRINGS, N.Y. - The Grade 1 Hopeful has a long history for launching great careers throughout its running at Saratoga Race Course. Since 1903, the winners list shows notables such as Regret, Man o' War, Native Dancer, Nashua, and Foolish Pleasure in addition to Triple Crown winners Whirlaway, Secretariat and Affirmed.

The eight entrants in the 113th edition will look to capture the winner's share of the $350,000 purse and add their name to the prestigious list on Monday, Closing Day, at the Spa.

Mr. Amore Stables' Firenze Fire enters the Hopeful perfect through two starts after the Poseidon's Warrior colt drew off to win his debut at Monmouth, followed by his victory by a length in the Grade 3 Sanford a little over a month later for trainer Jason Servis.

The youngster has shown the ability to rate early and pounce late, which may prove key in a race seemingly filled with speed. Firenze Fire will leave from post 3 with Irad Ortiz, Jr. in the saddle.

Robert C. Baker's Sporting Chance will look to end Firenze Fire's win streak, returning off his maiden-breaking score on the Saratoga meet's second day. The Tiznow colt tried to wire three others in his debut at Churchill Downs on June 15, but after setting a quick pace, held on for second. A victory by Sporting Chance would give Hall of Fame trainer D. Wayne Lukas his eighth victory in the Hopeful.

"I feel good. I feel like my horse is a very, very solid horse," Lukas said. "But it is a contentious field. At this stage of my career, I am not so naïve to think I can overpower them in a Grade 1 at Saratoga. On the other hand, we have grandiose ideas that we have a pretty good horse."

The pace setup among the field shows an abundance of speed, but Lukas said his colt, who has been on the front end in both races, shouldn't have a problem leaving the gate.

"Well, that won't affect us. We have been working on rating him," Lukas said. "Every trainer will tell you, 'mine will rate, mine will rate.' Mine will. One thing about him, he is very easy to train. A caveman could train him. He is very manageable; very professional. He really does everything right, almost to the point of a fault.

"You wonder if he is even interested in a lot of mornings. I trained him behind horses and then let the exercise girl just split 'em and he did it so methodically that you wonder if he got anything out of it...he is very laid back, he's pretty good."

Valene Farms Givemeaminit shows just one race on his resume after his debut in which he finished second, 2 ¼ lengths behind Sporting Chance. The Louisiana-bred colt by Star Guitar has been working well, trainer Dallas Stewart said.

"He's a real nice horse," Stewart said. "He trains better than I've ever seen a 2-year-old train. We sent him to Becky Baker. She's got two farms up in Lexington Kentucky. I sent her up to Becky; she can get them going. She said, 'Dallas, I got a lot of horses, this horse looks better than all these three-hundred, four-hundred thousand dollar horses.' She galloped him a couple of weeks, and then sent him into Churchill, and we started working him. He started beating everybody. He galloped [August 25], and if you saw his gallop, he looked like American Pharoah out there. It was unbelievable."

Givemeaminit will run from post 7 and gets Joel Rosario in the irons.

The Albaugh Family Stable owned and Dale Romans trained Free Drop Billy, off his closing, runner-up finish to Firenze Fire in the Sanford, will look to turn the tables with the extra furlong in the Hopeful. His Sanford effort came after the Union Rags colt fired off a three-length victory in his debut at Churchill Downs. The late-running colt will have plenty to catch up front in the late stages.

"I like our horse," Romans said. "I think we've got a big chance. He's doing super, good horse, he's coming into it right, further the better. Hopefully there's some speed in front, and we get to run by them. He's just training good. I always thought he was a good horse, and he's run well in his races."

Free Drop Billy will run from post 8 and will be ridden by Robby Albarado.

Another who looks to make his presence felt during the seven-panel event is Fort Spring Racing's Psychoanalyze who hails from trainer Brian Lynch's barn. The son of Overanalyze won a game duel by three-quarters of a length in his debut at long odds at Belmont, and returned with a stalking trip, but was outkicked in the late stages and settled for third in the Grade 3 Sanford.

"We've given him a bit of freshening after the Sanford," Lynch said. "He seemed to take the worst of it from the inside. He seems to be training good. We're starting to stretch him out and [hopefully] he identifies himself.

"He broke from the rail and got the worst of it with a lot of dirt kicked back at him. I thought he boxed on gamely to get third. It'll be interesting to see how he runs," he added.

Psychoanalyze will contest from post 4 and will be joined by Manny Franco for the first time.

Trainer Todd Pletcher, a three-time winner of the Hopeful, sends a strong pair in Mojovation and National Flag to the gate. The former, a son of Quality Road, rated nicely in his sole start to win by two lengths. National Flag brings an extra race in his career with a tiring seventh place finish in his debut at Belmont on the Stars & Stripes undercard after he dueled with the winner Shangroyal for the first half-mile. The Speightstown colt returned on August 5 to best eight others by 1 ¼ lengths after a bump-filled six-furlong run.

Oskar Blues may have one of the strongest debuts in the field. Sent off at odds of 33-1, the Ken McPeek-trained Speightstown colt put forth a game effort while on the front end of the field of nine, and was hemmed in on the rail to which he was then caught in a duel. The youngster led briefly then lost his lead before fighting back gamely under jockey Dylan Davis to regain it and best his rival by a nose at the wire on August 22. The victory was sweetened after as it was learned that Davis had become a father that day.

Oskar Blues will run from post 2 and will reunite with his tag team partner Dylan Davis in the saddle.