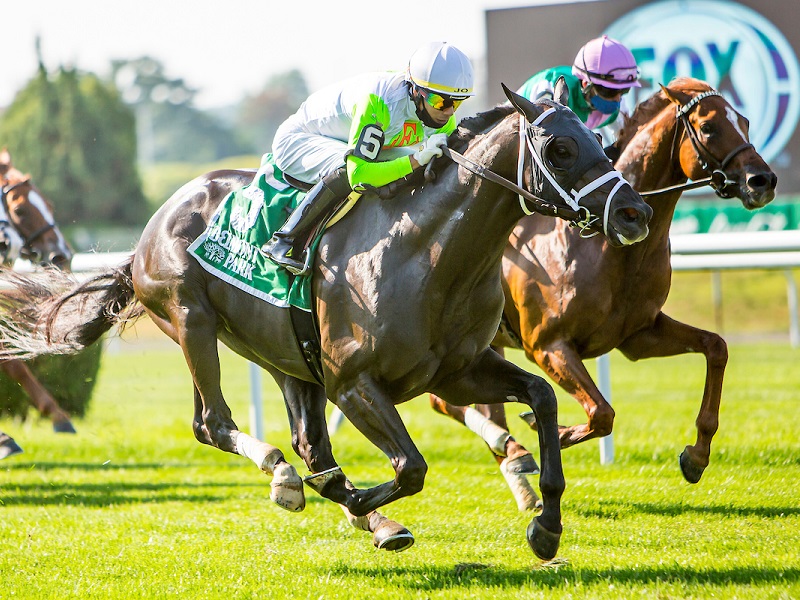 ELMONT, N.Y. - The Elkstone Group's Social Paranoia closed from out of the clouds to capture Saturday's Grade 3, $150,000 Poker, a one-mile turf test for older horses on Runhappy Met Mile Day at Belmont Park.

Trained by Todd Pletcher, the 4-year-old Street Boss colt was turning back in distance following an off-the-board effort in the nine-furlong Grade 2 Fort Marcy on June 6 at Belmont.

Jockey Jose Ortiz guided Social Paranoia to victory in the Grade 3 Appleton on March 28 at Gulfstream Park in his seasonal debut and was reunited with the versatile dark bay on Saturday as Dream Friend set swift splits of 24.50 seconds and 49.28 on the firm Widener turf.

Multiple Grade 1-winning mare Got Stormy, with Hall of Famer John Velazquez up, tracked from second position with Valid Point to his inside. Got Stormy took aim at the pacesetter into the turn with Seismic Wave and Value Proposition, the 5-2 mutuel favorite under Irad Ortiz, Jr., launching their bids.

Social Paranoia, distanced in seventh through three-quarters, was tipped out wide for the stretch run by Ortiz and quickly circled the pack with Hawkish, piloted by Manny Franco, trying an inside charge at the leaders.

Ortiz and Social Paranoia soon took command while Hawkish, full of run, failed to find a hole outside a fading Got Stormy and inside a lugging in Value Proposition. Social Paranoia, in the clear, found the wire first by one length in a final time of 1:36.30.

Seismic Wave completed the exacta by 1 ¾-lengths over Value Proposition, who was a half-length in front of Got Stormy. Rounding out the order of finish were Dream Friend and Hawkish, who dead-heated for fifth, Eons and Valid Point. Main-track only entrant Its All Relevant was scratched.

A stewards inquiry and jockey's objection by Franco against Ortiz, Jr.  into the incident just inside the sixteenth pole was denied.

Pletcher said the turnback in distance suited Social Paranoia despite being further back than desired in the early running.

"I thought we were a tick further back than I thought we would be and they were going a tick slower than I had hoped," said Pletcher, who captured the 2014 Poker with Jack Milton. "I thought we made a mistake last time in trying to use him a little bit early on to get into position from the outside post going a mile-and-an-eighth. He showed us in his first start back at Gulfstream that he just wants to settle and make one run. Jose executed the plan very well and it was a good performance."

Ortiz said he felt comfortable throughout and that he played his hand perfectly.

"It was a good trip. I knew they were going slow but he was very relaxed. When we made our move, I had to go wide because they were going so slow," said Ortiz, who previously won the Poker with King Kreesa [2015] and Oscar Performance [2018.]. "I knew everyone was going to have a really good run to the end but when I passed the eighth pole, he was going really nice. He put his head down and rolled home."

Social Paranoia finished second in the 2019 Grade 1 Belmont Derby Invitational over 1 ¼-miles on the Widener turf to kick off the Turf Triple series and was an even fourth in the Saratoga Derby Invitational, second leg of the Turf Triple, before winning the Dueling Grounds Derby at 1 5/16-miles at Kentucky Downs in a productive sophomore campaign.

He made the grade in his seasonal debut with a rousing last-to-first charge in the Grade 3 Appleton, and was third in the Sunshine Forever at the Hallandale oval ahead of the Fort Marcy.

A $75,000 purchase at the 2017 Fasig-Tipton Select Kentucky Yearling Sale, Social Paranoia is out of the Deputy Minister mare Shutterbug.