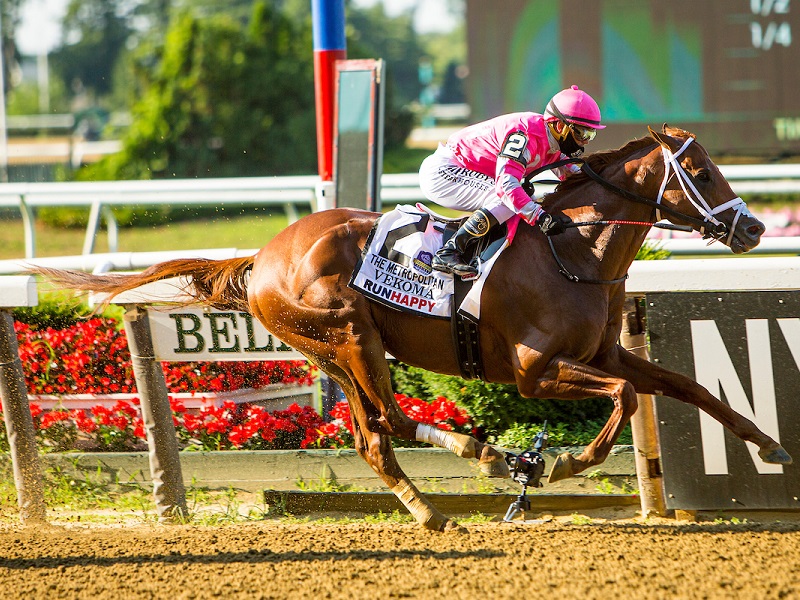 ELMONT, N.Y. - Vekoma stayed undefeated in his 4-year-old campaign, breaking on top and never relinquishing the lead to post a 1 ¼-length win in the 127th running of the Grade 1, $500,000 Runhappy Met Mile on Saturday at Belmont Park.
Vekoma, owned by R.A. Hill Stable and Gastas Stables, vanquished a talented eight-horse field that boasted a combined 20 graded stakes victories, improving to 5-for-5 going around one turn. In the process, the Candy Ride colt earned an all-fees paid entry to the Breeders' Cup Dirt Mile in November at Keeneland.

Under Hall of Fame jockey Javier Castellano, Vekoma broke sharp from post 2 and was sent to the front, going the opening quarter-mile in a leisurely 22.73 seconds and the half in 45.87 on the main track labeled fast.

Out of the turn, Vekoma kept to the inside and thundered for home, outkicking a game Network Effect in hitting the wire in 1:32.88 to give trainer George Weaver his first Met Mile victory. It also marked the second straight time Vekoma bested Network Effect over Belmont's Big Sandy, with the duo running 1-2 in the Grade 1 Runhappy Carter on June 6.

"I was happy with our trip around the backside," Weaver said. "I knew we had natural speed, and no one really went with us, so I was happy with the fact that he was there. At the quarter pole, it seemed like all comers were coming and I thought 'Man, does he have anything left in the tank or not?'. When they got to the eighth pole and I saw him rebreak and keep going, I got excited. It was fun."

Vekoma has won graded stakes as a 2, 3 and 4-year-old, and remained undefeated in 2020 after capturing the Sir Shackleton in March at Gulfstream Park. The Kentucky bred won his second Grade 1 over Belmont's Big Sandy in as many months, adding to his 7 1/4-length triumph in the seven-furlong Runhappy Carter.

"As the race unfolded it looked like a lot of horses were trying to make a run and come at us," Weaver said. "At the quarter pole, for a brief moment, I didn't know if he had any horse in the tank or not, but at the eighth pole I saw him re-break and I was so proud of him."

Off as the slight 9-5 second choice behind McKinzie, Vekoma returned $5.90 on a $2 win bet. Vekoma improved to 6-0-1 in eight career starts with four graded stakes wins and earned millionaire status, increasing his career bankroll to $1.24 million.

The Grade 1, $750,000 Whitney is slated for August 1 at Saratoga Race Course, with Weaver leaving open the possibility to running in the 1 1/8 mile contest or the Grade 1, $300,000 Forego presented by America's Best Racing on August 29 if Vekoma needs more time after his pair of big efforts at Belmont.

"We're going to nominate to the Whitney for sure, but he's run two huge races back-to-back," Weaver said. "The most likely scenario, to me, is that he would come back in a race like the Forego. We want to plot a campaign to get us to the Breeders' Cup, so we'll take a look at the calendar and go from there."
Castellano notched his third career Met Mile win, joining Honor Code in 2015 and Ghostzapper in 2005.

"Sometimes you handicap the race and then you have to throw it out when you break out of the gate. I made a decision and used my best judgement and I think it paid off today," Castellano said. "They came after me at the three-eighths pole, but he's such a great horse and such an honest horse. The further he went the stronger he got."

Klaravich Stables' Network Effect ran second for the third time in four starts this year. The 4-year-old son of Mark Valeski, who won the Big Drama on May 2 at Gulfstream, edged 2019 Grade 1 Runhappy Travers-winner Code of Honor by a neck for runner-up honors.

"Perfect trip, I can't complain," said Irad Ortiz, Jr., Network Effect's jockey. "I got a good trip and the horse ran big today on a dry track. They went a little fast. Vekoma is a nice horse, we just got beat. We were second best today."