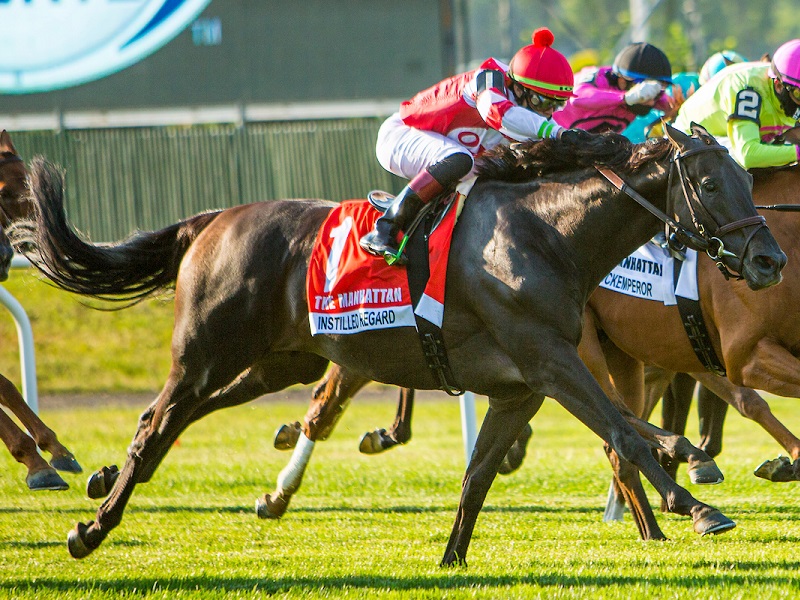 ELMONT, N.Y. - As is quickly becoming custom, the Grade 1, $400,000 Manhattan was dominated by four-time Eclipse Award-winning trainer Chad Brown, who saddled Instilled Regard and Rockemperor to a one-two finish in the prestigious 1 ¼-mile turf race on Saturday at Belmont Park on Runhappy Met Mile Day.

The win was Brown's sixth Manhattan victory in nine years. He first won the race in 2012 with Desert Blanc and in 2019 saw his barn complete the trifecta, with champion Bricks and Mortar taking home the top prize.

Mirroring the tight finish on the track, OXO Equine's Instilled Regard and Rockemperor were practically inseparable in the betting as both went off at 2-1 in Brown's quest to win back-to-back editions of the Manhattan for a third time, with Rockemperor the slight favorite as they each sought their first Grade 1 victory.
When the gates opened, Rockemperor gained a distinct advantage over his stablemate heading into the clubhouse turn as Hall of Famer John Velazquez piloted the 4-year-old colt into the garden spot, just off the pace while hugging the fence. Instilled Regard was forced to settle in midpack with the meet's leading rider Irad Ortiz, Jr. aboard as Cross Border led the eight-horse field through modest splits of 24.56 seconds for the opening quarter-mile, 50.46 for the half, and 1:15.93 for three-quarters on Belmont's firm inner turf course.

From the back of the pack, Sadler's Joy uncorked a menacing rally on the outside, while Rockemperor's fortuitous run continued as he tipped out from behind horses into the stretch and a chasm opened up in front of him. But Ortiz, Jr. deftly navigated Instilled Regard through traffic, making a decisive move to split the pair at the sixteenth pole and then charging home to a neck victory over his stablemate, hitting the wire in 2:02.59.

"They both got really good trips," said Brown. "Both jockeys did a great job and both horses responded super. It's unfortunate one of them had to lose. In the end, Instilled Regard just made the last move of the chess match. I'm so proud of the horse. He keeps getting better."

Brown credited his staff for the success in the Manhattan.
"It's a testament to my team," Brown said after the race. "Through the years a lot of different horses have passed through our hands but much of my same team is intact and they've been working with all these horses. All the credit goes to them."

The Manhattan marked the second win of the year for Instilled Regard, who also finished third in the Grade 1 Pegasus Turf Invitational in his 2020 debut. After he started on dirt, running a late-closing fourth-place finish in the 2018 Kentucky Derby, Instilled Regard has only once finished outside the trifecta on the surface. The Manhattan score bumped his earnings to $983,240, just shy of the million dollar mark, and he returned $6.30 on a $2 win wager.

"His mind is getting better and better every time he runs on the grass," said Ortiz. "With this horse, he does everything you want. I like that. I can use it to get in position and he comes back to me so well. He saved all the energy until the end. When I asked him for it, he gave it. I had to work so hard but when I tipped him out, he responded so well. I knew I had a chance to get there, and he got there on time."

Hard-knocking veteran Sadler's Joy came up just short yet again on the Belmont turf, finishing a half-length behind Rockemperor in third.

"Unfortunately for him, he was at a disadvantage going a mile and a quarter with no pace," said Javier Castellano, rider of Sadler's Joy. "He was closing very well. I was not disappointed at all in the horse. He always tries and one day, we're going to catch up."