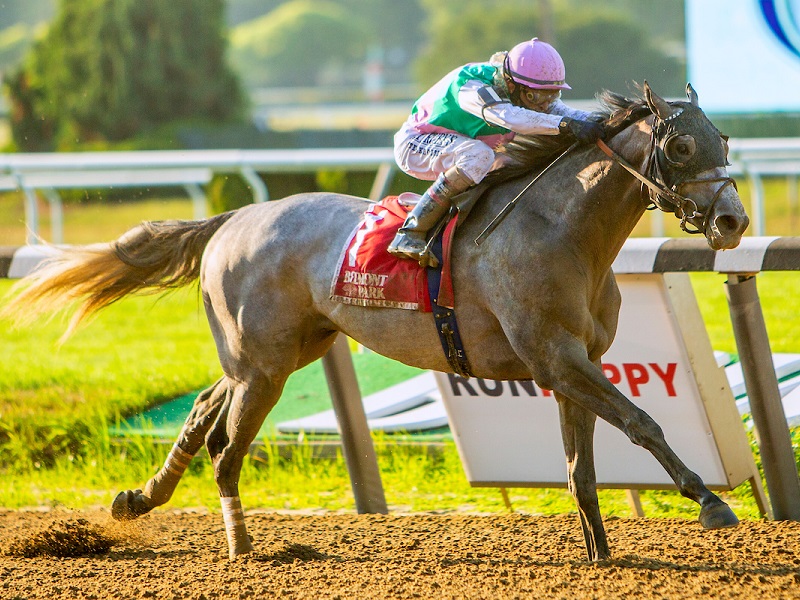 ELMONT, N.Y. - Juddmonte Farms' Tacitus rewarded the patience of Hall of Fame conditioner Bill Mott with a smashing return to the winner's circle in the 134th running of Saturday's Grade 2, $200,000 Suburban for older horses over the Belmont Park main track.

The 1 ¼-mile event rounded out an action packed program of five graded stakes on Runhappy Met Mile Day at beautiful Belmont Park, which was spearheaded by a wire-to-wire triumph from Vekoma in the Grade 1 Runhappy Met Mile.

Tacitus, a gray or roan son of multiple champion-producing stallion Tapit, arrived at the Suburban off a fourth-place finish in the Grade 2 Oaklawn Handicap on May 2, where he chased a leisurely pace over a speed-favoring track and made a four-wide move at the top of the stretch, closing enough ground to get fourth.

Guided by Hall of Fame jockey John Velazquez, who piloted E Dubai to a 2002 Suburban score, Tacitus broke sharply from his inside post and took back off a tepid pace set by 57-1 longshot Parsimony, who produced an opening quarter-mile in 24.68 seconds with eight-time stakes winner Mr. Buff just to his outside in second over the fast main track.

Parsimony and Mr. Buff raced alongside one another and extended their advantage to two lengths through a half-mile in 48.36 seconds with Tacitus in fourth just to the inside of Moretti. Around the far turn, Tacitus began making up ground under no urging from Velazquez and made a three-wide move through three-quarters in 1:10.82.

At the quarter-pole, Mr. Buff gave way while Parsimony was under an all-out drive by jockey Kendrick Carmouche. Velazquez remained cool, calm and collected aboard Tacitus who effortlessly went by the pacesetter around the three-sixteenths pole and glided home to a 8 ¾-length score in a final time of 1:59.51. Moretti closed to get second, a neck to the better of Parsimony in third.

"He was going comfortable the whole way," said Velazquez, who notched a fifth stakes victory this meet aboard Tacitus. "We had a little pressure in the first part of the race and little by little we kept reaching back and reaching back. I just wanted to be a little further back. Once we passed the five-eighths pole, I put my hands down and he got into a great rhythm. From there on, I knew he was comfortable, and in a position to win."

The Suburban was a first trip to the winner's circle for Tacitus since taking the Grade 2 Wood Memorial last April at Aqueduct Racetrack. He followed said victory with five straight placings against graded stakes company, including a third in the Grade 1 Kentucky Derby and runner-up finishes in the Grade 1 Belmont Stakes, Grade 2 Jim Dandy and Grade 1 Runhappy Travers. Tacitus also owns a graded stakes triumph in the Grade 2 Tampa Bay Derby last March at Tampa Bay Downs.

In his 4-year-old debut, Tacitus ran fifth in the inaugural edition of the Group 1 Saudi Cup on February 29 at King Abdulaziz Racecourse.

"We've put a lot into this horse," said Mott, who previously won the Suburban with Wekiva Springs (1996) and Flat Out (2013). "We took him to some big races, and he's run some good races. We took him halfway around the world earlier this year looking for something like that [winning effort] in Saudi and in Dubai before they canceled the race [Dubai World Cup]."

Perhaps it was a change of equipment that made a difference for Tacitus, who raced with blinkers on for Saturday's race.

The win marked a second stakes triumph on Runhappy Met Mile Day for Mott and Velazquez, who teamed up earlier on the card with Frank's Rockette to a victory in the Grade 3 Victory Ride.

Hall of Fame jockey Javier Castellano had no complaints regarding his trip aboard runner-up Moretti.

"Beautiful trip. That's just where we wanted to be; behind the two speeds. The race set up beautifully. We were just second-best today. Tacitus is a great horse," Castellano said.

Named after an ancient Roman senator, the Kentucky homebred Tacitus is out of 2014 Champion Older Filly Close Hatches and is a direct descendant of 1982 Broodmare of the Year Best In Show.