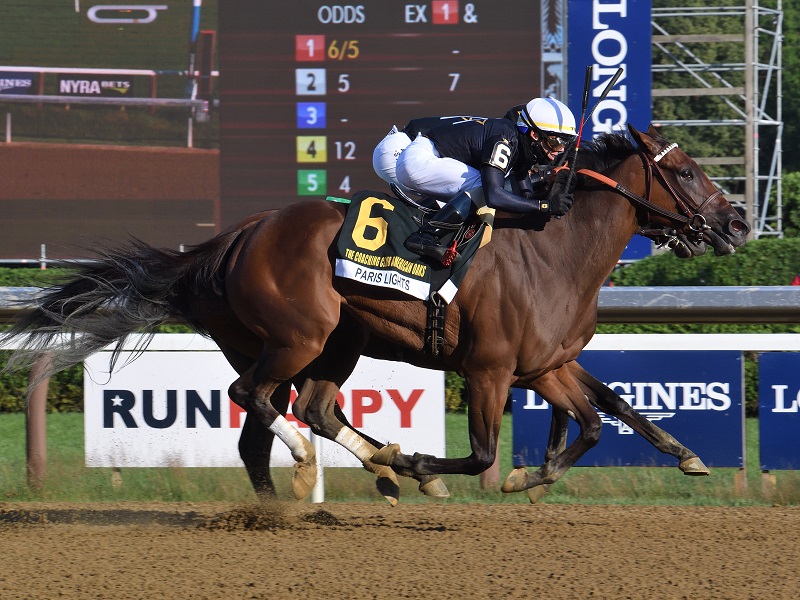 SARATOGA SPRINGS, N.Y. - Saturday's 104th running of the Grade 1, $350,000 Coaching Club American Oaks saw a dramatic stretch battle between WinStar Stablemates color-bearers Paris Lights and Crystal Ball, with the former getting her head on the wire at the right time in the 1 1/8-mile event for 3-year-old fillies at Saratoga Race Course.

Paris Lights broke sharply from the outside post under jockey Tyler Gaffalione and was in the clear heading into the first turn before Crystal Ball assumed command to lead the five-horse field through an opening quarter-mile in 24.43 seconds. Paris Lights kept close company just to her outside with Tonalist's Shape, who checked going into the turn, moving over to the three-path while under a tight hold from jockey Irad Ortiz, Jr.

Approaching the far turn, Crystal Ball was put under a drive from Hall of Fame rider Javier Castellano, while Gaffalione remain cool, calm and collected aboard his filly and did not begin asking her until they reached the quarter pole.

At the top of the Saratoga stretch, Paris Lights put a head in front, but a stubborn Crystal Ball was resilient and fought gamely to her inside. The two fillies duked it out and remained nip and tuck throughout the remaining furlong and a half, but Paris Lights came out on the winning end, completing the journey in a final time of 1:50.81 on the fast main track.

Crystal Ball finished 4 ¾ lengths ahead of Antoinette who rounded out the trifecta.

Tonalist's Shape and Velvet Crush, who walked out of the gate and was never a factor, completed the order of finish. Altaf was scratched.

Paris Lights made her stakes debut in the CCA Oaks, arriving at the event off a pair of victories going 1 1/16 miles at Churchill Downs. She now boasts a record of 4-3-0-1 and earnings of $287,912.

The bay daughter of Curlin earned 100 qualifying points towards the Grade 1 Kentucky Oaks on September 4 at Churchill Downs.

The win was a redeeming one for Hall of Fame trainer Bill Mott, who turned the tables on Crystal Ball's Hall of Fame trainer Bob Baffert three years after coming out on the losing end of a memorable stretch battle in the 2017 CCA Oaks when Elate finished a head behind the Baffert-trained Abel Tasman.

"I don't see any reason we wouldn't make that her potential goal. We've been lucky enough to win it a couple of times and naturally, I'd like to try it again," said Mott - a three-time winner of the Alabama.

The victory marked the first Grade 1 win at Saratoga for Gaffalione, who has been aboard Paris Lights in all four of her starts.

"My filly just kept digging in. The other filly [Crystal Ball, No. 5] was a little stubborn to get by, but my filly is all class," said Gaffalione. "All credit to Mr. Mott and his team. As usual, they do such a fabulous job and I'm just thankful I got the opportunity to ride her."

Gaffalione took advantage of a clean trip, which he said was key to securing the win.

"My filly jumped out really well. I looked over and saw the Baffert horse [Crystal Ball] go to the lead and I figured she was the speed on form," Gaffalione said. "I thought maybe [Velvet Crush, No. 4] would go with her, but she didn't get away that clean. So, I took advantage of it, and my filly was there for me the whole way."

Castellano, aboard Crystal Ball, said he was far from disappointed in his filly's effort.

"She's a young horse and it was just the third start of her career," Castellano said. "The way it developed, with better horses in this race, she hooked up and battled with one of the best horses. I'm not disappointed. I'm happy the way she did it. We just got beat on the [head] bob."

Bred in Kentucky by WinStar Farm, Paris Lights is out of the Bernardini broodmare Paris Bikini, who is a half-sister to graded stakes winner America and is a direct descendant of prolific broodmare Best In Show.