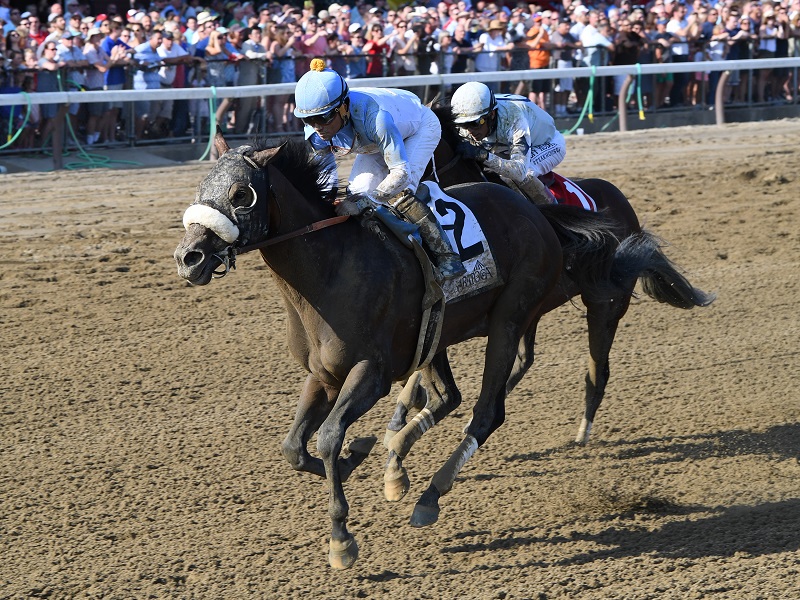 SARATOGA SPRINGS, N.Y. - A field comprised of five millionaires will make up a talented group of older horses assembled for the 93rd running of Saturday's Grade 1, $750,000 Whitney going 1 1/8 miles at Saratoga Race Course.

Whitney Day will feature three Grade 1 events, led by the historic Whitney, with an automatic berth to the Breeders' Cup Classic on November 7 at Keeneland on the line. The card is bolstered by the Grade 1, $500,000 Personal Ensign a "Win and You're In" qualifier for the Breeders' Cup Distaff in November; and the Grade 1, $300,000 H. Allen Jerkens Memorial presented by Runhappy for 3-year-olds sprinting seven furlongs. The stakes-laden card also includes the Grade 2, $250,000 Bowling Green for 4-year-olds and up on the turf and the $200,000 Caress, a 5 ½-furlong turf sprint for older fillies and mares. The card will be broadcast on Saratoga Live beginning at 1 p.m. Eastern on FOX Sports and MSG Networks.

The Whitney pays homage to one of the Spa's most influential families, who for generations have had a profound effect on horse racing in upstate New York. The prominent Whitney family's involvement in thoroughbred racing began with Jockey Club co-founder William Collins Whitney, who began owning thoroughbreds in 1898. His son Harry Payne Whitney campaigned horses under the moniker of Greentree Stables, who hold the record for most victories in the family's namesake race with six winners. Horses owned by members of the Whitney family have gone on to win every major horse race in North America, including all three American Classics.

This year's edition of the Whitney will feature W.S. Farish's two-time Grade 1-winner Code of Honor, who arrives off a late-closing third in the Grade 1 Runhappy Met Mile, where the 4-year-old chestnut son of Noble Mission settled at the rear of the field off a leisurely pace, went five wide around the turn and closed to finish 1 ½ lengths to frontrunning winner Vekoma.

Code of Honor, trained by Hall of Famer and three-time Whitney-winner Shug McGaughey, will attempt to become the first horse to capture the Travers, Jockey Club Gold Cup and Whitney in a career since Easy Goer. The Hall of Fame horse, who was also conditioned by McGaughey, accomplished the feat in one calendar year in 1989.

McGaughey said Code of Honor has proven capable of winning at one turn, but the horse is more suited for two turns.

Prior to the Runhappy Met Mile, Code of Honor made his seasonal bow a winning one, when taking the Grade 3 Westchester on June 6 at Belmont Park by a half-length.

Code of Honor will attempt to maintain an unbeaten record at Saratoga. A year prior to winning the Runhappy Travers, he was a gate-to-wire maiden winner at the Spa during his 2-year-old campaign.

Breaking from post 3, Code of Honor will be ridden by jockey John Velazquez, who will attempt to tie fellow Hall of Famers Pat Day and Jerry Bailey with the most wins in the race with five.

Coincidentally, these were three of the same four races that Blame had won heading into his Whitney victory.

"There's no substitute for class and they both have it," Stall, Jr. said. "He's a very classy horse. He's very laid back, easy to deal with, and easy to ride in the mornings."

Tom's d'Etat leads all Whitney entrants with three victories at the Spa. As a 3-year-old, he broke his maiden at third asking by four lengths and won an allowance optional claiming event by nine lengths the following year. Last season, he was a one-length winner of the Alydar.

Additionally, Tom's d'Etat also boasts the most wins at the distance, having won six times going nine furlongs, three of which were at the Spa.

"Some horses just take to it," Stall, Jr. said. "I can tell in the couple weeks he's been here, his hair is great and his eye is just what you want and it seems like he knows just where he is. He's been here at 3, 4 and 6. He took off just one year and this will be his fourth year here and he seems to know his way around."

His only defeat at Saratoga was in last year's Grade 1 Woodward, where he was a close but troubled fourth finishing 1 ¾ lengths to Preservationist.

"We had an awful trip in that race, but he fired his best shot that day," Stall Jr. said.

At the ripe age of 7, Stall, Jr. said Tom's d'Etat is better than ever.

"We see no signs of him going the other direction on us, especially from a mental standpoint," Stall, Jr said. "He's one of the last great progenies of Smart Strike. We just feel fortunate to be in this situation all the way around. To be in this spot, to run in these types of races, run in these Grade 1s and more importantly, we're happy that he has a super nice place to go to when his racing career is over [WinStar Farm]."

Tom's d'Etat has never lost in five starts with jockey Joel Rosario aboard and will attempt to keep an unscathed record intact from post 5 as the 6-5 morning line favorite.

Hall of Fame trainer Bob Baffert will saddle Improbable in attempt to be the first trainer to notch back-to-back wins in the Whitney since Scotty Schulhofer with Colonial Affair and Unaccounted For in 1994-95.

Jockey Irad Ortiz, Jr., who was aboard 2018 Whitney winner Diversify, will pilot Improbable from post 2.

Allied Racing Stable's By My Standards will attempt to turn the tables on Tom's d'Etat after finishing second in the Stephen Foster.

Trained by Bret Calhoun, the three-time graded stakes winning son of Goldencents began his 2020 campaign with three victories, including Grade 2 scores in the New Orleans Classic at Fair Grounds and Oaklawn Handicap, en route to the Stephen Foster.

During his sophomore campaign, By My Standards won the Grade 2 Louisiana Derby At Fair Grounds before a twelfth-place finish in the Grade 1 Kentucky Derby - his only off-the-board finish in ten starts.

"He's a good-minded horse and does everything the right way. He's a very smart horse and he's proved that he'll handle [shipping in], so we're confident sending him up there," Calhoun said. "Tom's d'Etat beat us last time with a great race, and we have the utmost respect for him and Code of Honor and all of them in there. But we think our horse is improving and we're hoping Whitney Day will be the day he brings his best."

All three of By My Standards' graded stakes wins were at the nine-furlong distance.

"That's another key. With a Grade 1, and a mile-and-an-eighth, and how he's training; they are all reasons why we're coming," Calhoun said.

By My Standards will exit from post 1 under Jose Ortiz.

Likely to show early speed, Mr. Buff will be looking for his first win since a runaway 20-length score in the Haynesfield on February 22 at Aqueduct.

"We know this place has been known as the "Graveyard of Favorites," but Mr. Buff is stepping into some deep water in this race," Kimmel said. "People might look at his last race and just kind of think that he's a little bit off form. But this horse has run commensurate numbers with all the horses in this race when he's been running against New York-bred company. People obviously think he can't do it against open company."

Mr. Buff arrives at the Whitney off a distant fifth in the Grade 2 Suburban on July 4 at Belmont Park.

"This horse in his last race actually had a little bone bruise in his foot," Kimmel said. "We went into it thinking he was OK, but I definitely think it bothered him. The blacksmith after that race cut out a little area and he had a little area of blood and some damage and since we have re-shod him, he has been a very happy horse here. He's had two very nice breezes over the racetrack."

Mr. Buff will leave from post 4 under jockey Junior Alvarado, who was the pilot aboard 2014 Whitney winner Moreno.