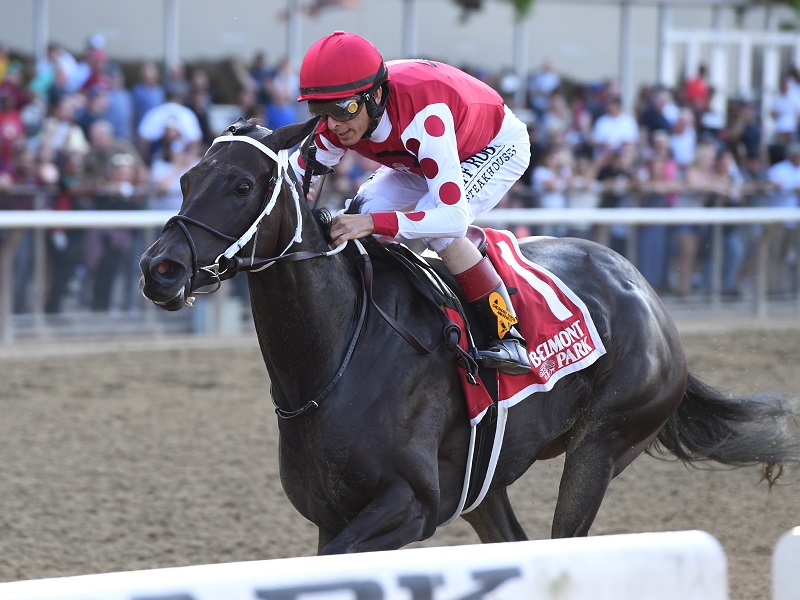 Whitney Day will feature three Grade 1 events, led by the historic Grade 1, $750,000 Whitney at 1 1/8 miles with an automatic berth to the Breeders' Cup Classic on November 7 at Keeneland on the line. The card is bolstered by the Grade 1, Personal Ensign, a "Win and You're In" qualifier for the Breeders' Cup Distaff in November; and the Grade 1, $300,000 H. Allen Jerkens Memorial presented by Runhappy for 3-year-olds sprinting seven furlongs. The stakes-laden card also includes the Grade 2, $250,000 Bowling Green for 4-year-olds and up on the turf and the $200,000 Caress, a 5 ½-furlong turf sprint for older fillies and mares. The card will be broadcast on Saratoga Live beginning at 1 p.m. Eastern on FOX Sports and MSG Networks.

Midnight Bisou, a dark bay 5-year-old daughter of Midnight Lute, has put together a sensational record of 21-13-5-3 with purse earnings of $7,371,520. Trained by Hall of Famer Steve Asmussen, Midnight Bisou will attempt to be the first horse to score back-to-back Personal Ensign triumphs since John C. Oxley's champion Beautiful Pleasure did so in 1999-00.

"It would be awesome," said Jeff Bloom, who owns Midnight Bisou in partnership with Madaket Stable and Allen Racing. "Anytime you run in those type of races, they're big regardless of what you've done in the past. She's training better than ever and we're ready for it."

Midnight Bisou garnered a career-best 104 Beyer Speed Figure when taking last year's edition of the Personal Ensign in dramatic fashion by a nose over Elate following a tenuous stretch battle.

At age four she came back bigger and stronger putting together an Eclipse Award-winning campaign which consisted of Grade 1 victories in the Apple Blossom at Oaklawn, Ogden Phipps at Belmont and last year's Personal Ensign.

This year, Midnight Bisou has sustained her winning form, displaying an inside-closing effort in the inaugural $20 million Saudi Cup in February and last out won the Grade 2 Fleur de Lis at Churchill Downs by 8 1/4 lengths.

Bloom said Midnight Bisou gives preference to certain main tracks, but noted that she has taken quite well to the new dirt surface at Saratoga.

"At the end of the day, I think she probably likes certain tracks more than others," Bloom said. "She's a huge fan of Belmont, but she's run well over any surface and over any environment. Once you give her the chance to see what's going on around her, she's okay. I think with the changes they made at Saratoga this past season she's training even better over there. She has a great feel for the track, from what I've seen."

Jockey Ricardo Santana, Jr. will be aboard Midnight Bisou for the first time from post 3.

Following a runner-up effort in the Grade 1 Ogden Phipps at Belmont Park, Point of Honor will be going back to two turns for the Personal Ensign.

Owned by Aron Wellman's Eclipse Thoroughbred Partners and Stetson Racing, the 4-year-old chestnut Curlin filly added "graded stakes winner" to her consistent resume last May, taking the Grade 2 Black Eyed Susan at Pimlico. She then followed up with two Grade 1-placings at the Spa in the Coaching Club American Oaks and Alabama. She then received a freshening after her runner-up effort in the Alabama to Dunbar Road and has placed in all three of her starts this year. Prior to the Ogden Phipps, she finished third in the Grade 1 Apple Blossom on April 18 at Oaklawn Park.

Hall of Fame jockey Javier Castellano will attempt his fourth Personal Ensign win aboard Point of Honor, who will exit from post 6.

Calumet Farm's Vexatious, a 6-year-old Giant's Causeway mare trained by Jack Sisterson, posted a career-best 100 Beyer when second last out on July 11 in the Grade 2 Ruffian won by Monomoy Girl traveling a one-turn mile at Belmont Park.
Vexatious ran second in the Grade 3 Modesty on the Arlington Park turf last July in just her second start for Sisterson and followed up with a game second in the nine-furlong Summer Colony, defeated a neck to Blue Prize who exited that race to win the Grade 1 Spinster at Keeneland and the Grade 1 Breeders' Cup Distaff at Santa Anita.

Bred in Kentucky by James C. Weigel and Giant's Causeway Syndicate, the versatile and well-bred Vexatious is out of Grade 1-winning millionaire Dream of Summer and is a full-sister to Grade 1-winner Creative Cause and a half-sister to multiple graded stakes-winner Destin.

Vexatious will stretch back out to nine furlongs for the Personal Ensign following her stellar effort at a one-turn mile in the Ruffian under Jose Lezcano.

"She ran such a good race in the one-turn mile. My concern going into the Ruffian was it was a new dimension for her cutting back to one turn," said Sisterson. "That one-turn mile is an extended sprint and you don't get much of a breather chasing fast fractions.

"Jose Lezcano rode her perfectly and he told me she's such a hard-trying filly and gave it her all," added Sisterson. "I think she'll stay whatever trip you put her over, it's just a matter of how fast she can stay the trip, but I do think the mile and an eighth will be better suited for her."

Vexatious will emerge from post 4 under the returning Lezcano.

Last weekend, Paris Lights and Crystal Ball gave members of WinStar Stablemates Racing a major thrill when battling down the stretch to a one-two finish in the Grade 1 Coaching Club American Oaks. This weekend Abounding Joy will seek to keep their spirits high when breaking from post 1.

Trained by Rodolphe Brisset, Abounding Joy arrives at her graded stakes debut in the Personal Ensign off a 5 ½-length win in the Iowa Distaff on July 4 at Prairie Meadows.

The 5-year-old bay mare is by Quality Road, who sired 2018 Personal Ensign hero Abel Tasman, and is out of the graded stakes winning Jump Start broodmare Jump On In.

Abounding Joy will be ridden by jockey Jose Ortiz.

Abbondanza Racing, Mar DeDomenico and Medallion Racing's Motion Emotion will attempt to turn the table on Midnight Bisou after finishing second to the champion in the Fleur de Lis last out.

Trained by west coast-based conditioner Richard Baltas, the Take Charge Indy bay filly was second in three of her four starts this season and will seek her first victory since taking the Zia Park Oaks on November 27.

During her 3-year-old campaign, Motion Emotion was second in the Grade 3 Honeybee and Grade 3 Fantasy (both at Oaklawn Park) en route to a ninth-place finish to Serengeti Empress in the Grade 1 Kentucky Oaks.

Rounding out the field is Lawrence P. Roman's Bossy Bride, who makes her graded stakes debut for trainer Rob Atras.

The daughter of Malibu Moon is a three-time winner from 15 starts and arrives at the Personal Ensign off a three-length starter allowance victory on July 10 at Belmont Park.

The Personal Ensign is named in honor of Ogden Phipps' undefeated champion mare who won all 13 of her lifetime starts, including a triumph against colts in the 1988 Whitney. Perhaps her most memorable performance was a rallying victory in that year's Breeders' Cup Distaff over a sloppy main track Churchill Downs, where she unleashed a devastating turn of foot to defeat Kentucky Derby winner Winning Colors. Trained by Hall of Famer Shug McGaughey, Personal Ensign also enjoyed a successful career as a broodmare having produced 1995 Champion 2-Year-Old Filly My Flag (the dam of 2002 Champion 2-Year-Old Filly Storm Flag Flying, who won the 2004 Personal Ensign), as well as Grade 1-winners Miner's Mark and Traditionally.