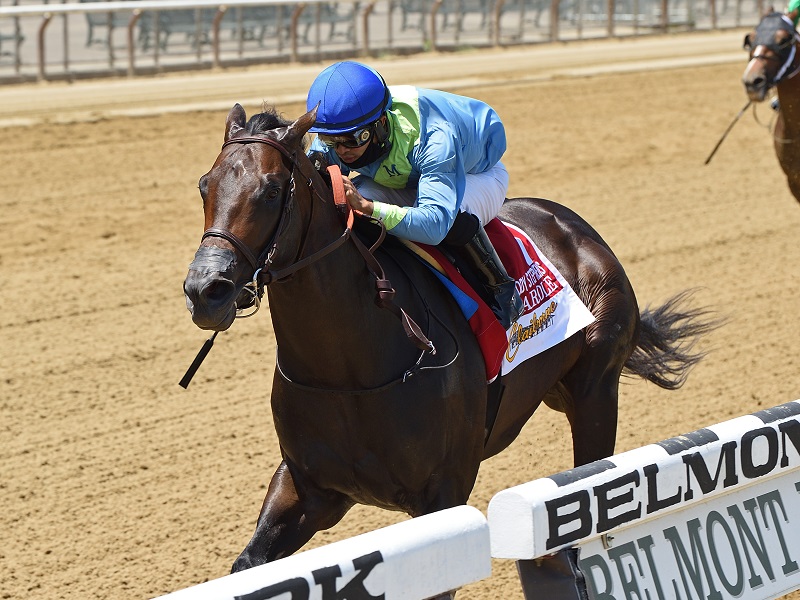 The 36th running of the H. Allen Jerkens, a seven-furlong main track sprint for 3-year-olds, is one of five stakes overall on the 12-race card and part of three Grade 1s, joining the $500,000 Personal Ensign for fillies and mares 4-years-old and up, and the $750,000 Whitney for 4-year-olds and up going 1 1/18 miles. The Personal Ensign is a "Win and You're In" qualifier to the Grade 1 Breeders' Cup Distaff in November at Keeneland, while the Whitney will offer the winner an all-fees paid berth to the Grade 1 Breeders' Cup Classic.

Carded as Race 10, the H. Allen Jerkens, formerly called the King's Bishop and renamed for the late Hall of Famer trainer known as the "Chief," will have a post time of 6:18 p.m. Eastern. First post is 1:10 p.m. Eastern. Saratoga Live will present full coverage beginning at 1 p.m. Eastern on FOX Sports and MSG Networks.

No Parole, owned by Maggi Moss and Greg Tramontin, is unbeaten going one turn, registering a perfect 4-for-4 ledger in sprints. Overall, the Tom Amoss trainee has won 5-of-6 starts, including his gate-to-wire win in the seven-furlong Woody Stephens on June 20 over a fast Belmont track, earning his first triple-digit Beyer Speed Figure with an even 100.

Ahead of his first Saratoga start, No Parole worked twice over the main track, going four furlongs in 50.50 seconds on July 16 before being ramped up on July 24, when he covered the same distance in 46.42.

"He's doing well. He had a much more enthusiastic work last week, which was by design," Amoss said. "Everything he had been doing before then was just easy. To sharpen him up, we put a good piece of work in him with a sharp half mile. He came out of it well."

The sophomore Louisiana-bred son of Violence is unbeaten going one turn. In the Woody Stephens, he went to the front and led at every point of call, outkicking the Steve Asmussen-trained duo of Echo Town and Shoplifted, who he will face again on Saturday.

No Parole's only defeat took place in the Grade 2 Rebel at Oaklawn Park going a two-turn mile and a sixteenth. Amoss said his charge has continued to develop and improve from that effort, winning both of his starts.

"I think what you're seeing is just a typical development of a talented horse, if you take away the experiment of going two turns," Amoss said.

Amoss, who is also an analyst for Saratoga Live, will have Luis Saez back aboard after the jockey piloted No Parole in the Woody Stephens in his first time aboard the colt. He will be back in the irons, breaking from post 6.

"I think he's the perfect rider for No Parole and he was my first choice when we came to Belmont and fortunately, we were able to get him," Amoss said.

Bred by Coteau Grove Farms, No Parole is out of the stakes-placed Bluegrass Cat broodmare Plus One.

Hall of Fame trainer Bob Baffert, who will saddle Improbable in the Whitney in Race 9, will send out Grade 1-winner Eight Rings in the sprint contest. A debut winner last August at Del Mar, Eight Rings won a Grade 1 as a juvenile in the American Pharoah, named for Baffert's 2015 Triple Crown winner.

After running sixth in the Grade 1 Breeders' Cup Juvenile in November at Santa Anita, Baffert gave the son of Empire Maker five months off. But Baffert said he might have brought back the $520,000 purchase too soon, as Eight Rings ran fifth in the six-furlong Bachelor on April 25 at Oaklawn. He has since been training at Del Mar, and Baffert said he is expecting better things as he ships to New York for the first time.

"He's doing good. I probably shouldn't have brought him back in that last one," Baffert said. "That might have been a trainer error there. But he's doing good and we're taking a shot."

Asmussen will saddle three contenders, with the Hall of Famer sending out Woody Stephens runner-up Echo Town and third-place Shoplifted in addition to Sonneman.

L and N Racing's Echo Town has never finished off the board in six starts, posting a 3-2-1 ledger. Making his graded stakes debut last out, the Speightstown colt stayed next-to-last in the five-horse field through six furlongs before rallying for second. He earned a 93 Beyer for the effort, marking his fourth consecutive race registering at least a 90.

Ricardo Santana, Jr., aboard for Echo Town's last five starts, will have the return engagement from post 4.

Shoplifted will return to the site of his debut win last July when he posted a 4 ½-length score. Owned by Grandview Equine, Cheyenne Stables and LNJ Foxwoods, the son of Into Mischief earned graded stakes blacktype with a second-place finish to Basin in the Grade 1 Hopeful last September at the Spa.

After running out of the money in the Grade 3 Southwest and the Oaklawn Stakes in the spring at Oaklawn, the $800,000 purchase at the 2019 Fasig-Tipton Florida Select Sale was cut back in distance and ran third in the Woody Stephens. Staying at seven furlongs, Shoplifted will have the services of jockey Tyler Gaffalione from post 7.

Courtland Farm's Sonneman made his stakes debut in his fifth career appearance last out in what turned out to be a match race with Celtic Striker in the Easy Goer on June 25 at Belmont. Scratches whittled the field down to two, with Sonneman staying one length behind at the half-mile mark before Celtic Striker pulled away for a 19 3/4-length romp.

After posting two wins and two runner-ups in his first four starts, the Curlin colt will get another opportunity at stakes action, drawing post 3 with Jose Lezcano aboard.

Live Oak Plantation's Tap It to Win will make his first start since running in the 1 1/8-mile Grade 1 Belmont Stakes on June 20. Trained by Mark Casse, Tap It to Win broke his maiden at Saratoga last August and won his first two starts to his sophomore campaign before being stretched out in the first leg of the Triple Crown.

Tap It to Win is 2-for-2 in dirt sprints in his career and will try to extend that mark on Saturday.

"We're excited to get him back out there in the Jerkens," Casse said. "His one race at Saratoga was extremely good in a sprint. We're hoping that going back there, he shows what he did last year."

Hall of Famer John Velazquez, who has won this race four times, including last year aboard Mind Control, will ride from post 11.

Mischevious Alex, a two-time graded stakes-winner for Cash is King and LC Racing, ran fourth in the Woody Stephens to break a three-race winning streak. Conditioned by John Servis, Mischevious Alex won the Grade 3 Swale in February at Gulfstream Park and followed with a two-length victory in the Grade 3 Gotham in March at Aqueduct Racetrack.

Trainer Jeremiah Englehart will send out New York-bred Captain Bombastic, the last-out winner against state breds in the Mike Lee, who carries a 3-2-1 record into his first graded stakes appearance. He picks up the services of Hall of Famer Javier Castellano for the first time, drawing post 10.

His stablemate, Three Technique, has two wins and three-runner up finishes in six starts with his only off-the-board finish last out when fourth in the Grade 2 Rebel in March on a sloppy and sealed Oaklawn track. Jose Ortiz will depart from post 8.

Rounding out the field is Liam's Pride, a last-out winner of the Gold Fever on a sloppy Belmont track on July 10, for trainer Doug O'Neill [post 9, Dylan Davis]; and Hopeful Treasure, conditioned by Michael Pino, who will make his first start against graded stakes company [post 1, Manny Franco].