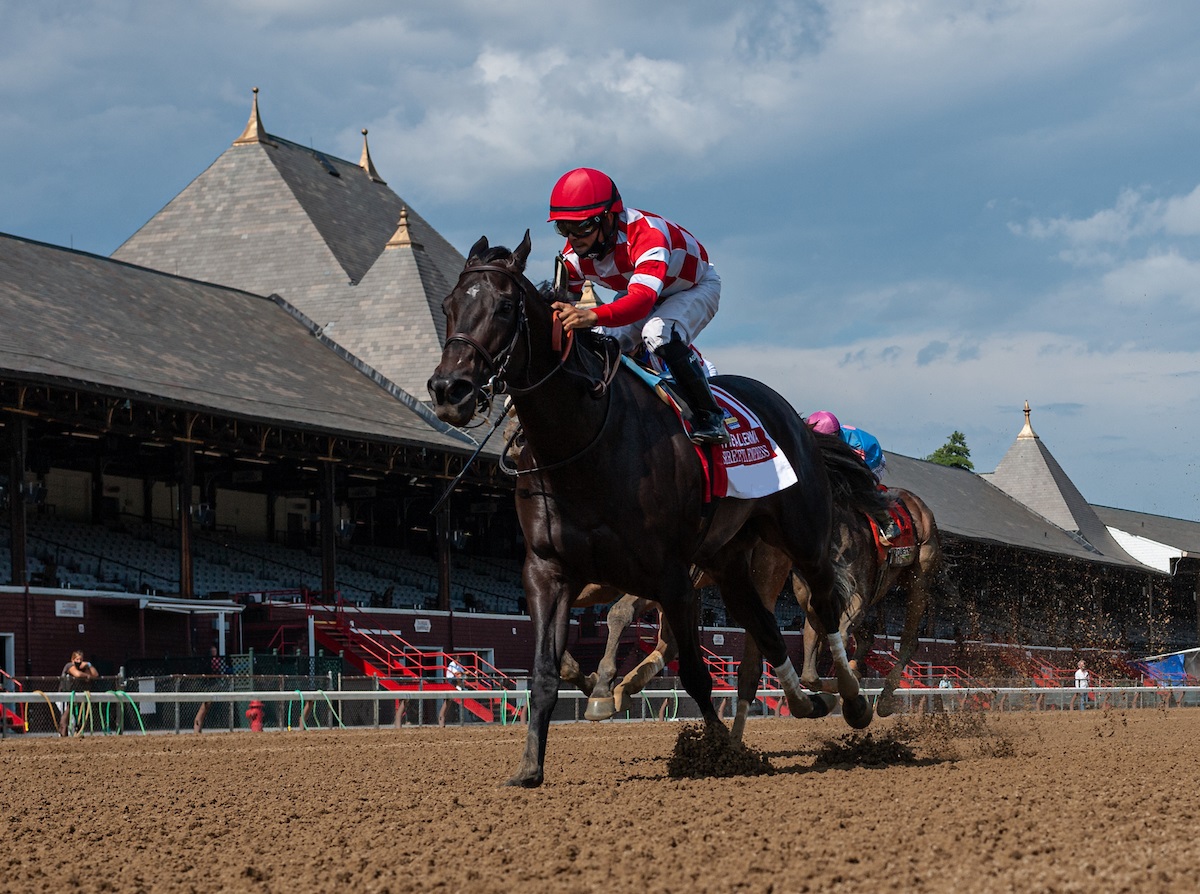 SARATOGA SPRINGS, N.Y. -  Last year's Grade 1 Kentucky Oaks-winner Serengeti Empress got back to her winning ways on Saturday at Saratoga Race Course with a gutsy performance in the Grade 1, $300,000 Ballerina presented by NYRA Bets to kick off the graded stakes action on the Grade 1 Runhappy Travers undercard in thrilling fashion.

As has been a common refrain in 2020, the year had not yet gone to plan for the speedy Serengeti Empress, who finished second in the Grade 1 Longines Test over this track and distance last year in addition to winning the Oaks. Although she began her 4-year-old campaign with a strong runner-up finish in the Grade 3 Houston Ladies Classic and a win in the Grade 2 Azeri at Oaklawn Park, the mercurial daughter of Alternation was well beaten in each of her last two starts, with all her prior 2020 starts coming around two turns.

While she's won at distances up to 1 ⅛ miles and has had no trouble routing in the past, a return to one-turn racing in the seven-furlong Ballerina, a 'Win and You're In' race for the Breeders' Cup Filly and Mare Sprint, proved to be the cure to her recent woes.

Serengeti Empress did not get away particularly sharply from the rail and was beaten to the punch by Mexican sensation Letruska on Saturday. But that did not stop jockey Luis Saez from hustling her to the early lead through a wicked opening quarter-mile in 21.75 seconds.

After that rapid opening quarter, the pace did not slow down from there, with the half going in 43.73 as Letruska continued to dog the leader. While the enervating fractions took their toll on Letruska and she backed away leaving the far turn, Serengeti Empress dug in gamely with a host of pursuers lining up behind her.

As the field turned for home, the favorite Bellafina and last year's Ballerina winner Come Dancing came with menacing runs on the outside while upstart Victim of Love loomed large on the rail, however Serengeti Empress refused to succumb. Three-quarters was posted in a rapid 1:08.32, and though her pace slowed down considerably in the final furlong, none were able to reach Serengeti Empress, who prevailed by a length in the end over Bellafina in a final time of 1:21.63.

"The first jump, she was not that fast, but I asked her a little and she put me in that position," said Saez. "I know she was rolling. She was going pretty fast. When we came to the stretch, she was just waiting for the competition and when the horse came outside, she was fighting. She was really running."

Serengeti Empress' trainer Tom Amoss was equally in awe of the courageous effort his filly put forth, one that makes it very likely she continues to focus on one-turn races with the Breeders' Cup now being the main objective.

"That was very valiant," said Amoss, who trains Serengeti Empress for owner Joel Politi. "She didn't break on time. She was a step slow, but when you go seven-eighths and you have that opening on the track before you hit the main track, you get an opportunity to catch up, and she did. She was able to regain her position, but I really thought that opening half-mile in [43.74 seconds] was going to be her doing in. I thought we learned a lot about her today. What we learned is that this is a real good middle-distance filly.

"You know, if you're a handicapper and you paid attention to last year's Test, when she got beat a head to Covfefe who ended up being a champion, you knew that seven-eighths had a real chance at being exactly what she wanted," Amoss added. "I look forward to staying at the seven-eighths distance, maybe getting one more start in her before the Breeders' Cup."

Serengeti Empress returned $8.30 on a $2 win wager and nearly took her earnings over the $2 million dollar mark with the winner's share of the purse of $165,000. Her lifetime record now stands at 7-3-1 from 17 starts.

California shipper Bellafina failed to add another Grade 1 victory to her resume, but she ran an admirable race in defeat finishing 1 ½ lengths ahead of third-place finisher Victim of Love, who proved her last-out 27-1 shocker in the Grade 3 Vagrancy Handicap on June 27 at Belmont Park was no fluke. Come Dancing, meanwhile, couldn't quite capitalize on a great setup to repeat as Ballerina champ, but the 6-year-old mare finished a half-length behind Victim of Love in fourth as she continues to try to get back to her terrific 2019 form.

Letruska, Pink Sands, and Cookie Dough completed the order of finish in the 42nd running of the Ballerina.