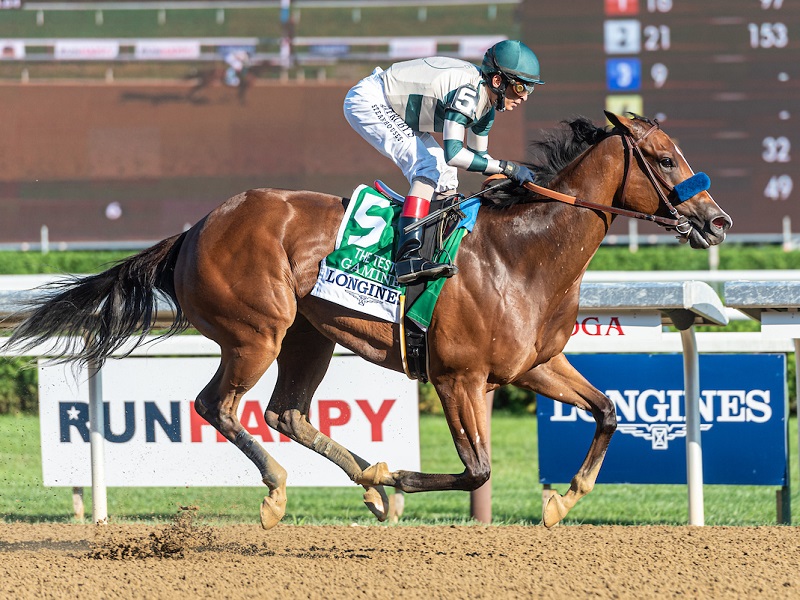 SARATOGA SPRINGS, N.Y. - The brilliant Gamine asserted her class once again on the NYRA circuit with a dominant performance in the Grade 1, $300,000 Longines Test on Saturday at Saratoga Race Course, where she prevailed over Venetian Harbor in the 95th running of the prestigious race for 3-year-old fillies, which served as the prelude to the track's marquee event, the Grade 1 Runhappy Travers.

After a record-setting 18 ¾-length victory last out in the Grade 1 Acorn on June 20 at Belmont Park, the racing world was anxiously awaiting an encore from Gamine. She did not disappoint.

Though many were hoping her connections would point to the Grade 1 Kentucky Derby against males after her tour de force in the one-mile Acorn, Gamine's connections, Hall of Fame trainer Bob Baffert and owner Michael Lund Petersen, remained steadfast in their pursuit of the Grade 1 Kentucky Oaks, even turning the daughter of Into Mischief back in distance for the seven-furlong Test as a stepping stone to the race, a decision that paid immediate dividends.

Breaking from post 5 with Hall of Famer John Velazquez in the irons, Gamine left the gate cleanly and immediately assumed control of the early lead. The scratch of Wicked Whisper earlier in the day left the Test a virtual match race between Gamine and Venetian Harbor, with only those two possessing the requisite early speed to set the pace. The opening stages figured to be a battle of strategy between Velazquez and Joel Rosario, rider of Venetian Harbor, but Rosario showed his hand early as he was content to ease his filly just off the flank of Gamine and allow her to dictate terms.

In sharp contrast to the Grade 1, seven-furlong Ballerina run earlier on the card for older fillies and mares, Gamine set a much more measured pace of 22.70 seconds for the opening quarter-mile and 45.14 for the half with Venetian Harbor in close pursuit and third choice in the wagering Mrs. Danvers sitting in the catbird seat just behind the top pair.

As the field turned for home neither Gamine nor Venetian Harbor had been asked for their best run, but as soon as the race began in earnest at the top of the stretch it was over in an instant. Velazquez simply nudged Gamine forward and the filly opened up a daylight lead in a matter of strides that she continued to add to for the duration of the stretch. On the wire she was seven lengths to the good of Venetian Harbor, stopping the clock in a snappy 1:20.83, which equaled the stakes record set by Lady Tak in 2003.

"Obviously, she's very good. You love to be on these kinds of horses," said Velazquez. "I have to thank Bob and the owners for the opportunity. Bob said she breaks well and to kind of let her do her thing. If another horse wants to go too fast, we just let her sit second and she'll be fine sitting second. But she broke so good and the other horse [Venetian Harbor] kind of stayed right next to me and didn't press the pace very much, so I just kind of let her do what she wanted to do the first quarter-mile. Once we got to the turn, I let her get into the turn and she got really comfortable and really smooth and got away from the other horse and kept going. Very nice."

Venetian Harbor was forced to play bridesmaid once again, checking in a clear second ahead of Up in Smoke, who was followed by Perfect Alibi and Mrs. Danvers. The runner-up finish makes three straight for the bay daughter of Munnings, who also finished second last out in the Grade 1 Ashland at Keeneland and two back in the Grade 3 Fantasy at Oaklawn Park.

"She's super fast," said Rosario of Venetian Harbor, who turned back in distance for the Test after a steady diet of two-turn racing. "She broke running fast and [Gamine] did, too. I just tried to sit off her. She ran a tremendous race, but the winner was just very impressive."

Next up for the undeniably impressive Gamine is the Grade 1, $1.25 million Kentucky Oaks on September 4 at Churchill Downs, and given the lofty heights she's reached through just four career starts it'd be hard not to be bullish on her chances.

"She's rising straight to the top," said Jimmy Barnes, assistant to Baffert. "For what she's accomplished so far for such a lightly raced filly, we look forward to stretching her out and see what comes of that."