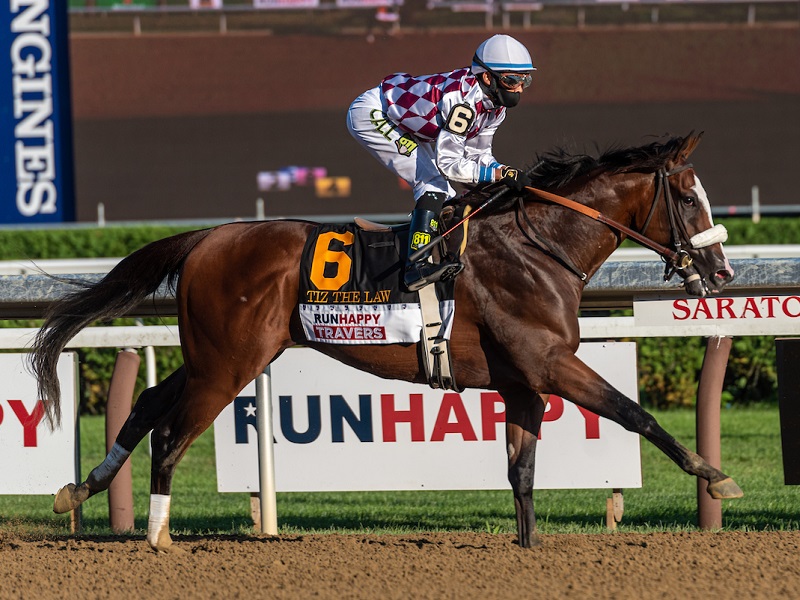 SARATOGA SPRINGS, N.Y. - Six horses lined up late on a picturesque summer afternoon Saturday at Saratoga Race Course to fight the law, and the Law won.

Sackatoga Stable's Tiz the Law further entrenched himself as the leading 3-year-old in the country, following up his dominant triumph in the Grade 1 Belmont Stakes on June 20 with a command performance in an historic 151st running of the Grade 1, $1 million Runhappy Travers.

The 1 ¼-mile "Mid-Summer Derby" was contested for the first time without spectators, a byproduct of health protocols amid the ongoing coronavirus pandemic. Exactly one year to the day following his debut victory at Saratoga, Tiz the Law became just the third New York-bred Travers winner and first since Thunder Rumble in 1992.

The Constitution colt earned 100 qualifying points for the Grade 1 Kentucky Derby, postponed from May 2 to September 5 and re-positioned as the second leg in racing's Triple Crown following the Belmont.

Shortened to 1 1/8 miles, Tiz the Law became the first New York-bred in 138 years to win the Belmont Stakes since Forester won in 1882. The Triple Crown concludes with the Grade 1 Preakness on October 3 at Pimlico Race Course.

His fourth consecutive victory and third straight in a Grade 1 allowed Tiz the Law to sweep New York's two highest profile races, and provide redemption for Sackatoga and trainer Barclay Tagg, who campaigned 2003 Derby and Preakness winner Funny Cide. Funny Cide was denied a Triple Crown when third behind Empire Maker in the Belmont, and a fever days before the race prevented him from running in the Travers.

It was the first Travers win in his second try for Tagg, who went out on his own in 1972 and completed a career Triple Crown with Tiz the Law's Belmont triumph. He ran seventh with Tale of Ekati in 2008.

"I've been doing this a long time and I've always wanted to win the Travers. This has been in my head my whole life. And now it happened so it couldn't be better," Tagg said. "You always have some doubt because many different things can happen. That's always in the back of you're a mind, but I was very confident in the horse."

A dozen of Sackatoga's 35 partners in Tiz the Law were on hand for the Travers led by operating manager Jack Knowlton, a Saratoga Springs resident and another holdover from the Funny Cide era. The Travers anchored five graded-stakes, three Grade 1, worth $1.95 million in purses on a spectacular Runhappy Travers Day program.

"It's just so exciting," Knowlton said. "To be in the race and to be 1-2, there's a lot of pressure. We had well-wishers from everywhere. We saw a performance today that just blows me away. We know we had a nice horse. We thought we had the best horse. To do what he did today, we're looking forward to going to Kentucky."

With regular rider Manny Franco in the irons, Tiz the Law completed 10 furlongs in 2:00.95 over a fast main track to win the Travers by 5 ½ lengths over late-running Caracaro. Max Player got up for third, followed by South Bend, Country Grammer, Uncle Chuck and Shivaree. First Line was scratched.

Franco had Tiz the Law in perfect position right out of the gate, settled in the clear in third racing three wide as California shipper Uncle Chuck hugged the rail through an opening quarter-mile in 23.65 seconds with 77-1 long shot Shivaree, second to Tiz the Law in the Grade 1 Florida Derby in March, nestled in between.

The half went in 48.36 seconds without a change among the leaders, but Tiz the Law tugged Franco into second to challenge Uncle Chuck leaving the backstretch as Shivaree began to drop back. Tiz the Law and Uncle Chuck hooked up in earnest midway around the turn, and Franco hardly moved on Tiz the Law as he coasted past approaching the stretch.

Tiz the Law straightened for home firmly in control, allowing Franco to wrap up on the talented bay midway down the lane and cruise unchallenged to the wire under a hand ride. The final time was the second-fastest Travers in 32 years, trailing only Arrogate's track record of 1:59.36 set in 2016.

"I didn't expect a race like that, but we'll take it. He ran huge," Franco said. "He was there the whole way for me and I was just waiting for the moment because it is a long way to go - a mile and a quarter - and he hasn't gone that distance before, so I'm trying to save as much horse as I could before I made my move.

"He gave me chills. When I pressed the button, he just took off," he added. "He accelerated really hard. After that, I took a peek back and he was going away and I just saved horse."

His Travers victory kept Tiz the Law perfect in four starts as a 3-year-old, after opening his campaign with victories in the Grade 3 Holy Bull and Florida Derby over the winter at Gulfstream Park prior to the Belmont, which was moved this year to lead off the revised Triple Crown trail. The Travers also saw its spot on the calendar change from the fourth Saturday in August to the second and, for the first time, become a qualifying race for the Derby.

Bred by Twin Creeks Farm and purchased for $110,000 out of Fasig-Tipton's Saratoga Preferred New York-bred Yearling Sale in August 2018, Tiz the Law burst on the scene with a 4 ¼-length maiden victory at first asking last August 8 at Saratoga, sprinting 6 ½ furlongs against fellow New York-breds. He stepped up to Grade 1 company second time out and captured the one-mile Champagne at Belmont Park by four lengths, but ran into a sloppy track at Churchill Downs and wound up third - beaten less than a length - in the Grade 2 Kentucky Jockey Club, the only blemish on his record.

Earlier on Saturday's program Serengeti Empress earned an automatic berth to the Breeders' Cup Filly & Mare Sprint in November at Keeneland with her front-running victory in the Grade 1, $300,000 Ballerina presented by NYRA Bets; Gamine turned in a superstar performance in capturing the Grade 1, $300,000 Longines Test in 1:20.83 for seven furlongs on the main track; Laurel Park shipper American Sailor was promoted to victory via the disqualification of first-place finisher Imprimis in the Grade 3, $200,000 Troy for older turf sprinters; and My Sister Nat held off favored Mrs. Sippy in the Grade 3, $150,000 Waya on the inner turf.