Full Field to do Battle in Charles Town Classic 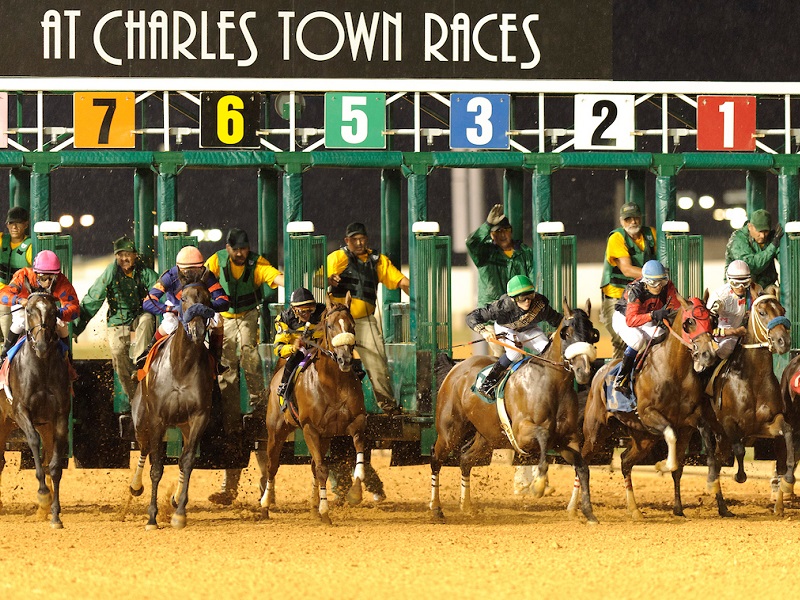 Charles Town, WV (August 25, 2020) – An overflow field of ten runners, led by Grade 1 winner Math Wizard will take to the gate on Friday night at Hollywood Casino at Charles Town Races as the track hosts its premier event of the season – the rescheduled $600,000 Charles Town Classic (G2) for older horses going the three-turn distance of 1 1/8 miles. West Virginia’s most lucrative race highlights a card that includes seven stakes with purses totalling $1.25 million and marks the first time the track has held two graded events on the same day. Post time for the first race on the card is 5:00pm EST.

After following up his signature win in the 2019 Pennsylvania Derby (G1) with a fifth-place effort in the Breeders’ Cup Classic (G1), the Saffie Joseph trained Math Wizard spent some time on the sidelines before a return to the races produced a subpar performance in the Razorback (G3) at Oaklawn Park in February. After the ongoing Covid pandemic threw Math Wizard’s schedule up in the air, he spent another four months away from the races, resurfacing in a handicap at Gulfstream Park where he checked in fifth beaten 3 3/4 lengths.

However, in his last start on Haskell day in the Monmouth Cup, Math Wizard signaled a potential return to form when he closed well to finish second, beaten 1 1/2-lengths for the top spot by Global Campaign. Since his effort at Monmouth, the son of Algorithms has flourished in his training up at Saratoga and his conditioner thought the lucrative Classic was a race that suited his colt well.

“He ran one of the best races of his life last time out according to the numbers, and he’s been training great coming out of it,” said the native of Barbados who will saddle his first ever starters at Charles Town on Friday. “I think he’s going to continue to progress and take another step forward on Friday.”

While Joseph has enjoyed a couple of breakout years as a trainer with 2020 Kentucky Derby (G1) contender Ny Traffic, multiple stakes winner Chance it and multiple graded stakes winner and 2020 Charles Town Oaks starter Tonalist’s Shape, it’s still his lone Grade 1 winner to date that he credits for getting the ball rolling in his stable’s quest to join the sport’s upper echelon.

“I think when we look back in 15 or 20 or however many years, we’ll say that Math Wizard will be the horse that put us on the map. He’s just an incredibly special horse to us and always will be.”

This Friday evening, Math Wizard will have the services of jockey Christian Hiraldo as he breaks from Post 4 as the 3-to-1 favorite.

Back for another run in the Charles Town Classic is Imaginary Stables and Glenn K. Ellis’ War Story, the eight-year-old gelding who was last seen finishing third in the Pegasus World Cup (G1) at Gulfstream Park earlier this year. With his start in the Classic on Friday night, War Story will join two-time winner Imperative as the only horses to make four starts in Charles Town’s marquee race and the son of Northern Afleet has come tantalizingly close to adding a Charles Town Classic score to his resume which already includes three graded stakes victories and earnings of more than $3.2 million.

Now trained by Elizabeth Dobles, War Story has checked in third in both the 2017 and 2019 runnings and second in 2018, a fact that led his connections to target this race after a trip to Dubai earlier in 2020 fell through.

The handicap division veteran has shown few signs of slowing down over the past two years taking graded stakes at both Monmouth Park in the 2019 Monmouth Cup (G3) and Gulfstream Park in the Harlan’s Holiday (G3) prior to his run behind Mucho Gusto and Mr. Freeze in the Pegasus.

War Story will have his fourth different rider in the Charles Town Classic as J.D. Acosta jumps on board the 4-to-1 second choice.

Much like his fellow Charles Town Classic runner Math Wizard, Allied Racing Stable LLC and Spendthrift Farm LLC’s Mr. Money is looking to recapture the 2019 form that eventually saw him sent off as the third choice in the Breeders’ Cup Dirt Mile (G1) behind the likes of Omaha Beach and Improbable.

After stringing together a four race winning streak in a quartet of Grade 3 events as a three-year-old, including the West Virginia Derby at Mountaineer, the Bret Calhoun trainee came within a neck of becoming a Grade 1 winner when he was caught in the final strides of the Pennsylvania Derby by his rival on Friday night. When he emerged after five months on the sidelines, Mr. Money caught a wet track – as well as Tom’s d’Etat and Improbable – in the Oaklawn Mile and followed that up with a wide trip that resulted in a fourth place finish in the Blame at Churchill before only mustering a sixth place effort in a cutback to 6 1/2 furlongs at Keeneland in his most recent outing.

In the Charles Town Classic, Mr. Money stretches back out to a distance that seems more to his liking but, either way, his trainer isn’t concerned about what he’s seen thus far in 2020.

“He had a great year last year and has had a rocky start to this year, but it’s not really his doing,” said Calhoun. “He caught a sloppy track that he didn’t like at Oaklawn. I thought he ran a pretty good race in the Blame at Churchill with a really wide trip. Then we got stuck without a spot with so many races getting canceled. So we ran him in that race at Keeneland and 61/2 furlongs is not his deal. So it really hasn’t been his fault. He’s trained forwardly all along and we’re looking forward to getting him back on track this Friday.”

Winchell Thoroughbreds’ Tenfold is himself out to recapture some past form and find the winners’ circle for the first time since the 2019 Pimlico Special (G3) and provide trainer Steve Asmussen with a win in his first Charles Town Classic.

Third, beaten less than a length by Justify, in the 2018 Preakness (G1) and a winner of the Jim Dandy (G2) later in his three-year-old season, the Winchell Thoroughbreds homebred eclipsed the $1 million mark in career earnings earlier this year and is looking to rebound from a third place finish in the Hollywood Gold Cup (G1) in June.

While Tenfold marks Asmussen’s first Charles Town Classic runner, he’s developed a solid record over the years at Charles Town with 6 wins from 14 stakes outings, a run that started with Rock Slide back in the 1987 West Virginia Lottery Breeders’ Classic.

Luis Batista rides Tenfold who stands at 5-to-1 on the morning line.

2019 Charles Town hero Runnin’toluvya is back to defend his crown and will seek to do what Duke of Mischief, Game on Dude, Imperative, Stanford and Something Awesome could not do - join Researcher as the only back-to-back winner of the Charles Town Classic.

In 2019, the West Virginia-bred son of Fiber Sonde entered the race red hot after stringing together eight consecutive wins over the Charles Town oval. 2020 will be a bit of a different story, however, as the popular gelding has dropped four of his last five decisions and comes into the race without a start since May 30.

However, neither his recent record nor the layoff is of great concern for Runnin’toluvya’s trainer Tim Grams who also owns the six-year-old along with his wife, Judy.

“He’s doing really good. I breezed him last week, and he did it handily. It’s going to be a tough race, but we’re going in without hesitation because of how well he’s doing. It was an unfortunate trip last time out. You know, it’s hard even for the really good ones to have to start and stop three or four times like he did. Obviously for my peace of mind I would like to be coming in off of a good race, but that was the hand we were dealt.”

As for the layoff, Friday will mark the fifth time Runnin’toluvya has started off a layoff of at least 90 days in his career, with the prior four outings resulting in three wins and a runner-up finish. Even without a race since the end of May, Grams has kept his stable star sharp and ready for his bid at a Classic repeat.

“I felt like last year, we had him in training without a race to point towards and he got a little dull. But this year he’s been staying a lot sharper and he’s fit. We’ll just have to see how it goes. I just hope he breaks clean and gets a good position in the clear so that when it’s time to run, he can run.”

Antonio Lopez has the call on Runnin’toluvya in the Charles Town Classic.

Another Charles Town Classic entrant looking to find the winner’s circle once again is the well-traveled Multiplier, who came up just a neck short of posting an upset in the Santa Anita Handicap (G1) earlier this year but has gone more than two years without a victory despite banking north of $500,000 in his career.

A winner of the Illinois Derby (G3) back in 2017, Multiplier was most recently seen knocking heads with divisional heavyweights Tom’s d’Etat and By My Standards in the Stephen Foster (G2) – a race where the now six-year-old finished fourth, beaten eight lengths. Despite Multiplier only being trainer Peter Miller’s second ever starter over the Charles Town oval, there was a familiarity with some of the track’s leading connections that made the trip to West Virginia more appealing.

“We’re excited and the horse is doing great,” said the California based Miller. “He’s been training up at Monmouth and doing really well over there. We’ve got the top rider [Arnaldo Bocachica] which is good and he’ll go to [Jeff] Runco’s barn for the week. I have worked with Jeff for a while and he’s great. So we’ll just hope for a good trip. We’re looking forward to it.”

As Miller alluded to, Multiplier will have the services of Charles Town’s leading rider, Arnaldo Bocachica on Friday night and will break from Post 10.

Plus Que Parfait, winner of the 2019 UAE Derby (G2) in Dubai, Sleepy Eyes Todd, and Ohiobreds Forewarned and Mo Dont No complete the body of the Charles Town Classic field with Awesome D J on the alsoeligible list.

Post time for the Charles Town Classic is set for 10:18 PM EST and the race can be seen on TVG as well as heard on the Horse Racing Radio Network. The Classic will be the penultimate race in the Charles Town 6-12 sequence – a Pick 6 with a low 12% takeout – that sports a mandatory of the carryover on Classic day with a total of $111,750 in the carryover going into the track’s Thursday night card.