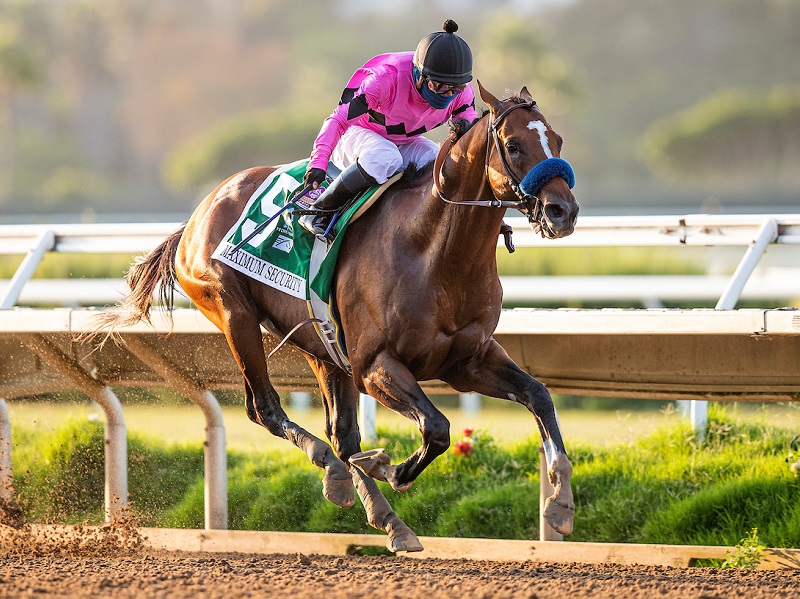 Heavily favored Maximum Security walked his beat in solid fashion Saturday at Del Mar as he came away a three-length winner of the Grade I, $500,000 Pacific Classic. He beat five rivals and earned a check for $300,000, pushing his bankroll north of $12-million.

It was win No. 1 in the Pacific Classic for rider Abel Cedillo, who said afterwards he believes the 4-year-old by New Year’s Day is the best horse he’s ever sat on. Cedillo now has seven stakes wins at Del Mar with this being his biggest and best.

The star-crossed colt is owned and was bred by Gary and Mary West, who have now brought in three European partners in Susan Magnier, Michael Tabor and Derrick Smith. The well-built bay finished first in the 2019 Kentucky Derby but was disqualified and placed 17th. He also won the $20-million Saudi Cup earlier this year, but his rich purse there is on hold because of issues with his former trainer and the possible drugging of horses.

Maximum Security, who went off at 2-5 in 30th edition of the Del Mar headliner, broke on top in the mile and one quarter and never relinquished the lead. He was pressed by Red Baron’s Barn, Rancho Temescal and Glatt’s Sharp Samurai all the way around, but shook off that determined opponent in the stretch and drew out to his handy score.

The Pacific Classic is a “Win and You’re In” race tied to the $7-million Breeders’ Cup Classic, which will be run on Saturday, November 7 at Keeneland in Kentucky. Maximum Security now has an automatic entry into that race with all fees paid.

GARY WEST (Owner/breeder, Maximum Security, winner) – “I’ve got tears in my eyes; I’m so happy. He looked so comfortable out there. There were a lot of good horses in that race, especially last year’s winner (Higher Power). Sharp Samurai stuck with us. But we were best. I’m really proud of him.”

ABEL CEDILLO (Maximum Security, winner) — “The race went pretty much how I thought.  Bob (Baffert) told me to keep him off the rail, because the speed was inside.  If someone wanted to run up inside of us, I would have let them.  He just galloped around the track.  I was a little surprised that the outside horse (Sharp Samurai) was with us early and he stuck around.  He ran big, but whenever he would get close, my horse would pull away on his own.  He still had a little left at the end.  I have to say this is probably the best horse I’ve ever ridden.”

BOB BAFFERT (Maximum Security, winner) – “We mapped it out that he’s the quickest horse, he’s ready and now you can ride him with a lot more confidence. Once he took the lead I figured he’d be fine. I just didn’t want any quarters in 22 (seconds). ‘Max’ was relaxing really nice. He was a totally different horse today. He (Abel Cedillo) got to know ‘Max’ last time and I’m happy for him. (Maximum Security) just does things effortlessly. He wasn’t even blowing when he came back. I’m just so happy for this horse. It’s not his fault what he went through. Today he showed that he is a great horse.”

The stakes win was the fifth of the meeting for rider Cedillo, but his first in the TVG Pacific Classic. He now has seven stakes wins at Del Mar.

The stakes win was the fourth of the meeting for trainer Baffert, and his record-tying sixth in the TVG Pacific Classic. He now has a Del Mar leading 137 stakes wins.