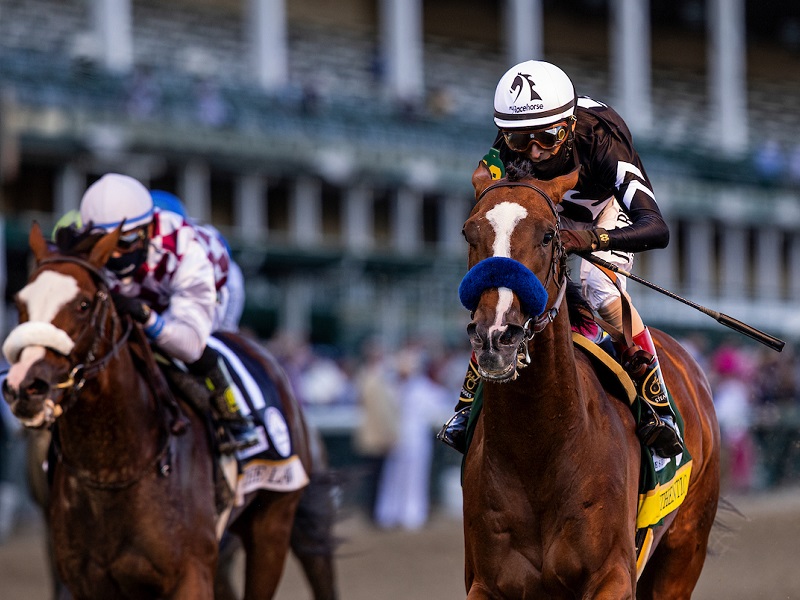 BALTIMORE – Kentucky Derby (G1) winner Authentic is favored at 9-5 in the morning line for Saturday’s 145th Preakness Stakes (G1) at Pimlico Race Course, providing Hall of Famer Bob Baffert an excellent opportunity to become the most successful trainer in the storied history of the 1 3/16-mile classic.

Authentic, who registered an impressive front-running victory in the Kentucky Derby at Churchill Downs, is scheduled to face 10 other 3-year-olds, including Thousand Words, who, at 6-1 in the morning line, figures to give Baffert a solid second chance to saddle his eighth Preakness winner.

Authentic is owned by Spendthrift Farm LLC, MyRaceHorse Stable, Madaket Stables LLC and Starlight Racing. Spendthrift Farm LLC also owns Thousand Words, who was scratched from the Derby after rearing and falling while being saddled in the paddock, in a partnership with Albaugh Family Stable LLC.

The Preakness, traditionally the Middle Jewel of the Triple Crown, will conclude the series on Saturday after being postponed from May 16 due to the COVID-19 pandemic. The Maryland Jockey Club’s signature event will be run without fans in attendance, as were the Belmont Stakes (G1) on June 20 and the Kentucky Derby Sept. 5.

Fans can watch and wager on the entire 12-race Pimlico program at 1st.com/bet/ and xpressbet.com.

The Preakness will be broadcast live on NBC from 4:30-6 p.m.

Should Authentic or Thousand Words prevail Saturday, Baffert will surely be hit with that old Preakness feeling to which he has become all too accustomed.

When Baffert saddled Triple Crown champion Justify for a victory in the 2018 Preakness, he tied the record for most wins by a trainer with Robert Wyndham Walden, who saddled seven winners between 1875 and 1888. From his seven Preakness winners, all five of Baffert’s Kentucky Derby winners won at Pimlico two weeks later. Authentic, however, will seek his second leg of the Triple Crown with four weeks between classics.

“He would have been ready to roll in two weeks. I feel pressure now because I never lost a Preakness with a horse I won the Derby with,” Baffert said. “Now the pressure’s on me.”

While he is well aware of his accomplishments at Pimlico, Baffert is making an effort to focus on the 2020 Preakness without reliving his past successes or his chance to become the winningest trainer in Preakness history Saturday.

Authentic will once again be guided by Hall of Famer John Velazquez, who has ridden three Derby winners and two Belmont Stakes winners, but will be seeking his first Preakness success. Thousand Words will be ridden by Florent Geroux for the first time Saturday.

Bruce Lunsford’s Art Collector, who was scratched from the Kentucky Derby in the days leading up to the race due to a minor foot injury, is scheduled to join the Triple Crown fray Saturday.

“We were going to miss a few days of training and that’s just not the way you want to go into the Kentucky Derby. I’ve been waiting for 30 years for this horse to come into my life. I’m sure not going to do anything to jeopardize his future for just one race,” trainer Tommy Drury said. “It certainly stung a little bit, but having this race right behind it, you kind of had to turn the page pretty quickly and start thinking about the next one.”

Art Collector, who is rated second at 5-2 in the morning line, has finished first in his last five races (by a combined 23 ½ lengths), including four straight victories since being turned over to Drury this year.

Art Collector, who won the July 11 Blue Grass (G2) at Keeneland and the Aug. 9 Ellis Park Derby in his two most recent starts, has shown the ability to set the pace or stalk the pace under jockey Brian Hernandez Jr.

“He knows this horse like the back of his hand. I don’t think I’ve ever given him instructions on this horse,” said 49-year-old Drury, who celebrated his first career graded-stakes success in the Blue Grass. “I’ve just told him to ride as it comes to him. By doing that he’s gotten several different trips. That’s where having a horse that’s versatile enough that he will allow you to do that is very beneficial.”

Drury has been impressed with the son of Bernardini’s preparation for the Preakness.

“The Derby was disappointing because he was training so well leading up to it, but, gosh, I feel like he’s doing equally as well right now,” he said. “We’re ready to take our best shot.”

Peter Callahan’s Swiss Skydiver, who is rated at 6-1 in the morning line, is scheduled to clash with the boys for a second time in her career. The multiple graded-stakes winning daughter of Daredevil finished second as the favorite behind Art Collector in the Blue Grass. She will make a bid to join a group of five fillies who have captured the Preakness: Rachel Alexandra (2009), Nellie Morse (1924), Rhine Maiden (1915), Whimsical (1906), and Flocarline (1903).

“I don’t know if we have to differentiate genders. In Europe, fillies run against colts all the time. I don’t think Enable has run straight fillies [more than a few times] in several years,” trainer Kenny McPeek said. “Here it seems to be more of a big deal, but for the most part when you bring a good one into the game, it doesn’t matter.”

Swiss Skydiver captured the Gulfstream Park Oaks (G2) March 29 before going on win the Fantasy (G3) at Oaklawn Park and the Santa Anita Oaks (G2). She set a pressured pace in the Blue Grass before being overtaken by Art Collector, losing by 3 ½ lengths but finishing 4 ¾ lengths clear of the third-place finisher and next-out winner Rushie. The McPeek trainee bounced back to score a dominating 3 ½-length victory in the 1 ¼-mile Alabama (G1) at Saratoga before finishing second in the Kentucky Oaks (G1) at Churchill Downs.

Swiss Skydiver is the latest in a long line of McPeek-trained Grade 1 stakes-winning fillies and mares, topped by Take Charge Lady, who earned nearly $2.5 million.

“It seems to me I’ve had better fillies than I’ve had colts. Maybe it’s just a coincidence. If you look back on my career I’ve had some good colts,” said McPeek, who saddled Sarava for an upset victory in the 2002 Belmont Stakes. “We try to treat them all as individuals, but maybe my program does fit fillies better. I’m not sure.”

Swiss Skydiver will have her sixth different jockey aboard for the Preakness when McPeek gives veteran Robby Albarado a leg up on his ultra-consistent filly. Albarado rode Curlin to a Preakness victory in 2007.

Allied Racing Stable LLC’s Mr. Big News, who finished third in the Kentucky Derby at 46-1, is slated to take on Authentic again Saturday. The late-developing son of Giant’s Causeway broke his maiden Jan. 20 at Fair Grounds in his fourth career start. He earned a ‘Win & In’ berth in the Preakness when he won his first stakes in the Oaklawn Stakes April 11 before disappointing with an off-the-board finish in the Blue Grass.

“Mentally, he’s always been a great-minded horse. He’s done everything the right way his whole career. Physically, he just wasn’t as strong as he is now. He had to fill out and get stronger. That’s what he’s done gradually,” trainer Bret Calhoun said. “It’s been a continuous development over the past five, six months to get where he needed to be. To be strong enough to be at the top of his game.”

“The trainer has to be patient. The owner needs to be patient to allow the trainer to be patient. It’s kind of a team effort,” Calhoun said. “This horse showed talent early on. I know not everybody was a believer. I think a lot of people were wondering, ‘What do you see in him?’ We saw something in him in his early works. He was getting better and better, making big leaps forward in his development. I told some people, ‘You’re going to read about this horse someday.’”

Gabriel Saez, who was aboard for the Oaklawn Stakes win, has the return call on Mr. Big News, who is rated at 12-1 in the morning line.

(Hall of Fame trainer D. Wayne Lukas, in 2013, was the last trainer to saddle three starters, including Calumet’s victorious Oxbow),
Max Player is the only horse entered in all three Triple Crown races this year. The son of Honor Code, who finished a non-threatening third in the Belmont for trainer Linda Rice, was never able to get into the race in his first start for Asmussen in the Derby, in which he finished fifth after breaking from the rail post.

“Obviously, I was a little bit disappointed in his race in the Derby but his post cost him considerably, just getting covered up early and being way too far back to be effective,” Asmussen said.

Pneumatic, who finished fourth in the Belmont, is coming off a 2 ¼-length victory in the ungraded Pegasus at Monmouth Park; while Excession will make his first start since finishing second in the Rebel (G2) at Oaklawn Park March 14.

“They’re only 3 once and they deserve this opportunity. I’m glad the tracks got together and made sure the races were run,” Asmussen said. “We’re very excited to have three talented horses in such an important race.”

Paco Lopez is scheduled to ride Max Player for the first time Saturday, while Joe Bravo and Sheldon Russell will have the mounts on Pneumatic (20-1) and Excession (30-1), respectively.

Ny Traffic, who faded to eighth after attending the early pace in the Kentucky Derby, will seek a rebound effort in the Preakness for owners John Fanelli, Cash is King LLC, LC Racing, Paul Braverman and Team Hanley.

The Saffie Joseph Jr.-trained son of Cross Traffic had finished second, beaten by a nose, behind Authentic in the Haskell (G1) at Monmouth.