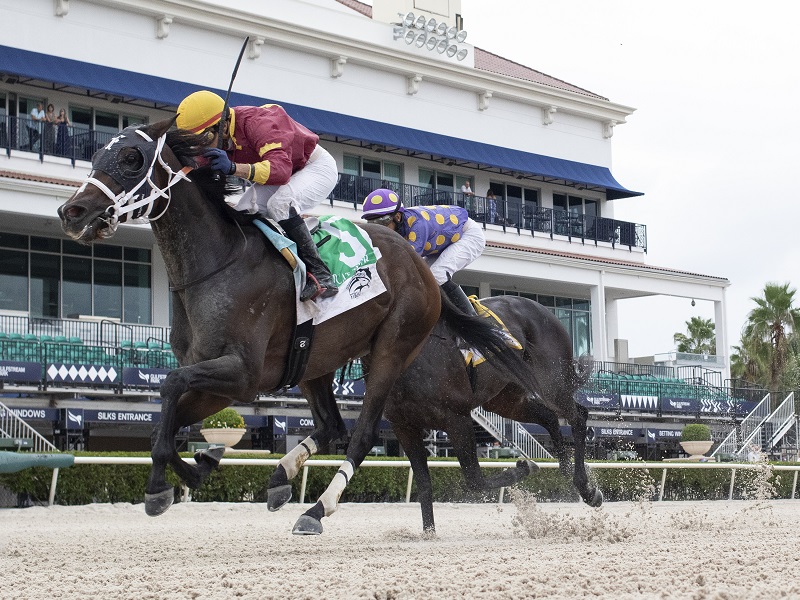 HALLANDALE BEACH FL – Noble Drama’s accomplishments may pale in comparison to those of his kin, but Harold Queen’s homebred 5-year-old gelding has carved out quite a profitable niche for himself.

Out of Queen Drama, a half-sister to 2010 Eclipse Award-winning sprinter Big Drama and a full sister to multiple Grade 1 winner Sheer Drama, Noble Drama has established himself as a dominating force in the Florida-bred ranks, amassing nearly $600,000 in purse earnings during a 22-race career that includes five stakes wins and 10 stakes placings.

The David Fawkes-trained son of Gone Astray will seek to continue his dominance in Saturday’s $60,000 Millions Classic Preview, a mile event for Florida-bred 3-year-olds and up on the nine-race Sunshine Millions Preview card at Gulfstream Park West that include four other stakes.

“Hopefully, this will be the steppingstone to the next one. He’s doing really good,” said Fawkes, referring to the $100,000 Sunshine Millions Classic at Gulfstream Park Jan. 16.

Noble Drama enters the Classic Preview in career-best form, coming off back-to-back victories at Gulfstream in the Sept. 6 Benny The Bull at seven furlongs and the Sept. 26 FSS Wildcat Heir at a mile around one turn.

“He’s been really good to us recently,” Fawkes said. “He’s gotten older and smarter and he really likes what he’s doing.”

In the Benny The Bull, Noble Drama overcame bumping at the start and rallied from seventh to win going away by 2 ½ lengths. In the Wildcat Heir, he settled in mid-pack before kicking in through the stretch to win by a length.

The very versatile gelding has won multiple stakes around two turns, including a victory in the 1 1/8-mile Sunshine Millions Classic last year.

“He beat some nice horses last time. He’s really turned into a decent horse. You’d love to have a barn full of horses like him,” Fawkes said.

Emisael Jaramillo has the return mount aboard Noble Drama.

Jacks or Better Farm’s Garter and Tie, one of the nice horses beaten by Noble Drama in the Wildcat Heir, is scheduled to return in the Classic Preview. The 4-year-old son of Brooks ‘n Down made a big move on the turn into the homestretch before making a strong stretch drive, in which he closed the gap from 3 ½ lengths to a length in the final eighth of a mile.

The Nicks trainee was stakes-placed in his previous two starts despite encountering trouble at the start of both races. He rallied to finish second behind heavily favored Cool Arrow in the Opening Lead before checking in third behind Noble Drama in the Wildcat Heir.

“He’s doing well. The only thing with him is: his two-turn races haven’t been as good as his one-turn races,” Nicks said. “That’s always a question with him. We’ll see what happens.

Edgard Zayas has the mount aboard Garter and Tie, who broke his maiden in the 2018 FSS Affirmed and has won two other stakes.

Equine Authority Inc.’s Red Crescent is set to title defense in the Millions Classic Preview, which he won by 1 ½ lengths last year. The 6-year-old son of Overdriven went on to finish second behind Noble Drama in the Sunshine Millions Classic, but is winless in five starts this year. The John Vinson-trained gelding finished fifth last time out in the Benny The Bull, in which he faded after stalking the pace while coming off a two-month layoff.

In his two prior starts, he finished third behind victorious Eye of a Jedi, finishing 1 ¾ lengths behind runner-up Noble Drama in the Sea of Tranquility and finished a length behind runner-up and multiple-stakes winner Diamond Oops in an optional claiming allowance.

Samy Camacho has the mount aboard Red Crescent.