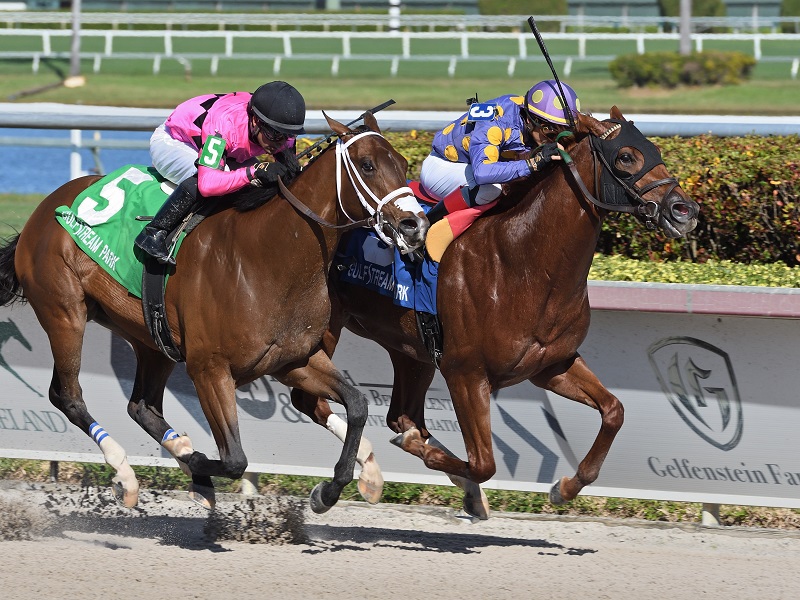 HALLANDALE BEACH, FL – After competing in major stakes for 3-year-olds out of town during the spring and summer months, Jacks or Better Farm Inc.’s Shivaree is scheduled for a return home and one-turn racing in Saturday’s $60,000 Millions Sprint Preview at Gulfstream Park West.

The homebred son of Awesome Again will face older rivals for the first time Saturday while making his first start since finishing well back in the 1 ¼-mile Travers (G1) at Saratoga Aug. 8.

Shivaree, a multiple-stakes winner around one turn, stepped up to Grade 1 company and finished second behind Tiz the Law at 80-1 in the 1 1/8-mile Curlin Florida Derby (G1) at Gulfstream Park March 28. He went on to finish third in a one-turn optional claiming allowance behind Sole Volante, the Sam F. Davis (G3) winner and Tampa Bay Derby (G2) runner-up, and Jesus’ Team, who finished second in last Saturday’s Breeders’ Cup Dirt Mile (G1) at Keeneland and third in the Oct. 3 Preakness Stakes (G1) at Pimlico. He got a well-earned break after finishing off the board in the Blue Grass (G2) and Travers.

“We’ll see how he goes, but his best races have been one turn,” Nicks said. “His Florida Derby was good, but if you look, other than Tiz the Law, everybody else hasn’t done anything.”

After racing competitively in Florida Sire Stakes action during his juvenile campaign, Shivaree broke his maiden in his fifth career start, but it didn’t take him long to find the winner’s circle again. He followed up his maiden score last fall at Gulfstream Park West with victories in the Buffalo Man and the Limehouse to start out Gulfstream Park’s Championship Meet. He went on to finish second in both the Swale (G3) and Hutcheson to earn a run in the Florida Derby.

“Six to seven furlongs is where he’s at his best,” Nicks said. “He’s pretty genuine.”

Emisael Jaramillo has the mount for Shivaree’s South Florida homecoming.

Eric Wirth’s With Verve, who defeated Shivaree by a neck in the Hutcheson, will clash with the Nicks trainee in the Sprint Preview. The Larry Bates-trained 3-year-old is winless in four subsequent starts but has run well to finish a close second to Double Crown in the Carry Back and fourth in the Smile Sprint (G3) in his first start against older horses.

Hall of Famer Edgar Prado has the return call aboard the son of Kantharos.

Tracy Pinchin ‘s Jackson, who scored an upset victory in the six-furlong World Of Trouble Sprint (G3) during Gulfstream’s Championship Meet, will make his second start off a seven-month layoff Saturday. The Jose Pinchin-trained 4-year-old son of Kantharos showed speed before tiring and finishing fifth in the mile FSS Wildcat Heir in his recent return at Gulfstream.

Cristian Torres has been named to ride Jackson.

Michele Rosa and Lawrence Sargent’s Legal Deal is scheduled to make his stakes debut in the Sprint Preview. The Carlos David-trained 3-year-old gelding is coming off a sharp second-place finish in a state-bred optional claiming allowance at Gulfstream Park West in his second start since being claimed out of a winning effort for $12,500. The son of Khozan set pressured fractions of 21.91 and 44.56 seconds for a half-mile before falling a half-length short of victory.

“He ran second going three-quarters, and they ran in 1:09 and change and it was a fast race. He’s going to be a little bit of a longshot but I think I’m going to give it a go,”David said. “It’s like a state-bred allowance race. There’s another state-bred allowance going 6 ½ but I think he’s more like a six-furlong horse. He’s got a lot of speed, so I want to use that speed to his advantage. He doesn’t necessarily have to be on the lead.”

Paco Lopez has the return call aboard Legal Deal.

Stage Door Stables LLC’s As Seen On Tv, who finished third in the Fountain of Youth (G2) during Gulfstream’s Championship Meet, will seek to rebound from three subpar showings in the Curlin Florida Derby (G1) and a pair of ungraded stakes at Monmouth Park.

Trainer Kelly Breen awarded the mount aboard the 3-year-old son of Lookin At Lucky to Edgard Zayas.

Making her first start since being claimed for $25,000 out of a 8 ½-length victory in a 6 ½-furlong optional claiming allowance Sept. 12, Cory Gal captured an Oct. 4 optional claiming allowance at Gulfstream Park West while running five furlongs in 56.58 seconds. In her debut for her new connections, the 4-year-old daughter of Corfu won by six lengths after setting a blistering pace in a race that was transferred from turf to a sloppy sealed racetrack.

“She knows where the finish line is. She’s in really good form. I just thought she’d be a good one to claim and run back in the same condition and make a nice chunk of change,” trainer Peter Walder said. “But we took a shot and ran her in the optional $62,500 that came off the grass and she broke the track record. This race would be the next logical spot, being a restricted race.”

Walder expects Cory Gal to set the pace Saturday while stretching out to seven furlongs.

“God bless anyone who tries to run with her, because it will hurt their own chances,” Walder said. “Whether she can carry it seven-eighths or not, I don’t know, but she did win at 6 ½ when we claimed her. I don’t see why the extra half could bother her.”

Cory Gal, who finished fifth in an overnight stakes in her May 2019 stakes debut and only stakes start, has won six of her last eight starts, including her last three races.

Paco Lopez has the return mount aboard Cory Gal.

My Purple Haze Stables LLC’s Heiressall, who notched her long-overdue first stakes victory in the Sept. 6 Sheer Drama at Gulfstream Park, is scheduled to make a run at back-to-back stakes scores Saturday.

The Terri Pompay-trained 5-year-old daughter of Wildcat Heir had been stakes-placed on five previous occasions, including a runner-up finish behind Wildwood’s Beauty in last year’s Distaff Preview.

In the seven-furlong Sheer Drama, Heiressall stalked the pace under Miguel Vazquez before kicking in through the stretch to score by a length. Vazquez has the return mount.

e Five Racing Thoroughbreds’ Sound Machine has also been entered in the Distaff after finishing a troubled third in the Miss Preakness (G3) at Pimlico Oct. 3. The Saffie Joseph Jr.-trained 3-year-old filly encountered bumping at the start and rallied late to finish less than two lengths behind victorious Wicked Whisper. Previously, the daughter of Into Mischief finished fifth in the Prioress (G2) at Saratoga off a 6 ½-month layoff. In her two most recent South Florida starts, she finished second behind Frank’s Rockette in the Any Limit and won the Glitter Woman during Gulfstream’s Championship Meet.

Edgard Zayas has the call aboard Sound Machine.