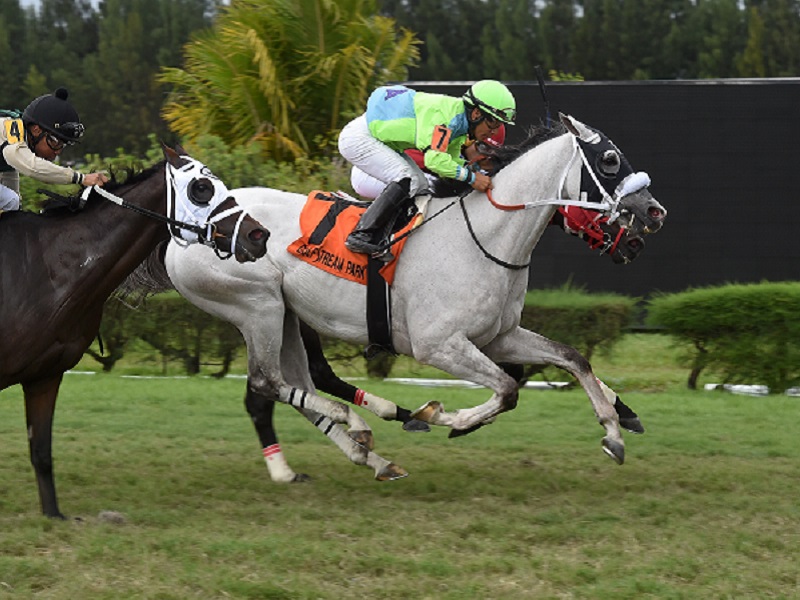 MIAMI GARDENS, FL – Anne D. Scott’s multiple stakes-winning gelding Galleon Mast, unraced since Labor Day, gets the chance to end one streak and continue another when he makes his return in Saturday’s $60,000 Millions Turf Sprint at Gulfstream Park West.

The 1 1/16-mile Turf Preview for 3-year-olds and up is one of two Florida-bred grass stakes on the nine-race program, joined by the $60,000 Juvenile Fillies Turf going one mile. First race post time is 12:35 p.m.

Galleon Mast has yet to win a race in five scattered starts this year, all in stakes, with one second and three thirds. The 7-year-old has won at least once in each of his first five seasons, including back-to-back editions of the Turf Preview at Gulfstream West, where he has three wins and a second from seven career ties.

“It’s been a little frustrating this year,” trainer David Fawkes said. “I gave him a lot of time and when he came back I don’t think he got back into his game like I thought he would. But, I’ll tell you what. Right now, he’s as good as I’ve ever seen him. He’s put weight on. Everything’s great about what he’s doing.”

Galleon Mast won the 2018 Turf Preview by a nose and last year’s edition by a head. He hasn’t won since, finishing second in the Soldier’s Dancer in June and third in the Jan. 18 Sunshine Millions Turf, July 25 Mecke and Sept. 7 Mr. Steele, all at Gulfstream.

Galleon Mast has been first or second in 23 of 38 career races, 10 of them wins, with eight thirds and $657,370 in purse earnings. Second in the 2018 Canadian Turf (G3) during the Championship Meet, he has shown Fawkes no signs of slowing down.

“We always spaced his races out pretty good. At the same time, the way things have been going this year there’s been races I’ve wanted to run him in and haven’t had the opportunity,” Fawkes said. “His longevity is incredible. He’s been with me for so long. He’s a real cool horse. It’d be great to win this race a third time.”

Paco Lopez, aboard for each of his previous Turf Preview wins, rides back from Post 7 in a field of 10.

Michael Dubb and Bethlehem Stables’ Muggsamatic beat Galleon Mast by a length in the Soldier’s Dancer and returns as one of two horses entered by trainer Mike Maker, along with Second Mate. Muggsamatic, 6, is a 10-time career winner exiting a third-place effort Sept. 16 at Kentucky Downs.

Eccentric Club Racing Stable’s Second Mate finished off the board in a one-mile optional claiming allowance Oct. 29 at Gulfstream West behind Max K.O., who also returns in the Turf Preview. Another 7-year-old gelding who, like Galleon Mast, is by Mizzen Mast, Second Mate was beaten a head and neck when third in last year’s Turf Preview.

Network Stables’ Sir Seamus had a three-race win streak snapped when fourth in an off-the-turf optional claiming allowance going 1 1/8 miles Sept. 12 at Gulfstream. The 4-year-old gelding has won four of six starts since trainer Carlos David – who won two stakes at Gulfstream West last weekend – claimed him from Maker for $16,000 in February.

“He’s not easy to train but I think we’ve got his number, and he’s done well. He’s been amazing. His second start for us he didn’t run well. He got a little bumped around the turn and he just kind of gave up that day,” David said. “He might have twisted his knee a little bit or something, because he was a little sore the next day. But after that we did a little work with him and he won three in a row.

“They were cheaper races, but he had great numbers,” he added. “He likes to be on the lead and he’s very hard to rate, so if you’re going to have a horse pressing him he’s going to have a hard time. He’s won at a mile and a sixteenth before, and if we get a good trip he should be able to do it.”

Rancho Alegre’s 3-year-old Monforte has yet to race at Gulfstream West but is six-for-11 lifetime including a victory in the 7 ½-furlong Bear’s Den Sept. 5 and has won four of five starts since being claimed for $35,000 by trainer Ruben Gracida last fall.

Scraps, winner of the 2019 Bear’s Den, Hero Up, Sassy But Smart and Venezuelan Hug complete the field.