Say the Word, Storm the Court among Pegasus Turf Invites 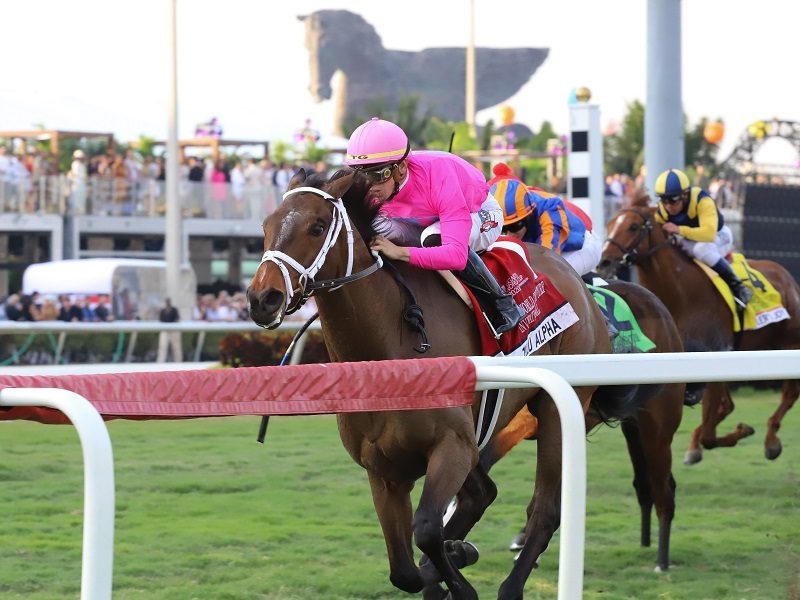 The third running of the 1 3/16-mile Pegasus World Cup Turf, introduced in 2019 to serve as a companion race to the $3 million Pegasus World Cup Invitational (G1), will be run Jan. 23. The Pegasus Turf has been won previously by eventual Horse of the Year Bricks and Mortar (2019) and Zulu Alpha (2020).

The 12 horses given first preference for the Pegasus World Cup Turf are (in alphabetical order):

The also eligible horses (in order of preference):

Trainer Todd Pletcher, winner of 16 of the past 17 Championship Meet titles at Gulfstream Park, has an intriguing trio of contenders for the Turf in Largent, Social Paranoia and Colonel Liam.

Largent is an improving son of Into Mischief who enters the Pegasus off a victory Dec. 12 in the Fort Lauderdale (G2). The gelding has won six of nine career starts and has won four of his five starts at Gulfstream.

Pletcher-trained Social Paranoia, a 4-year-old son of Street Boss, prepped for the Pegasus at Gulfstream Dec. 16 by winning an allowance optional claiming event off a five-month layoff. Social Paranoia earlier in the year won the Appleton (G3) at Gulfstream.

Pletcher’s third entry is the lightly raced Colonel Liam, a 4-year-old son of Liam’s Map who enters the Pegasus off an impressive 3 ¼-length victory Dec. 26 in the Tropical Park Derby at Gulfstream Park.

Trainer Barclay Tagg, who trained the recently retired Tiz the Law to victories in last year’s Florida Derby (G1), Belmont Stakes (G1) and Travers (G1), comes into the Turf with Doswell. The lightly raced 6-year-old raced only once as a 2-year-old. The son of Giant’s Causeway broke his maiden as a 5-year-old and ended 2020 with a second-place finish behind Largent in the Fort Lauderdale.

It took seven races for North Dakota to win his first race, but the Shug McGaughey-trained 5-year-old has since won three of five races with his last being the Nov. 21 Red Smith (G3) at Aqueduct. McGaughey will also send out Breaking the Rules, a 6-year-old son of War Front who comes off a fourth-place finish in the Knickerbocker (G2) in October and a third-place finish in the Fort Lauderdale (G2).

Say the Word, a 6-year-old Ontario-bred by More Than Ready, enters off a third-place finish Nov. 27 in the Hollywood Turf Cup (G2) for trainer Philip D’Amato after winning the Northern Dancer Turf (G1) in October at Woodbine. The gelding finished fourth in his only other race at Gulfstream, that coming in 2018.

Storm the Court ships in from Santa Anita for trainer Peter Eurton. Winner of the 2019 Breeders’ Cup Juvenile (G1), the son of Court Vision was sixth in the Kentucky Derby (G1) last year before moving to turf and finishing seventh in the Hollywood Derby (G1) and second last time out in the Mathis Brothers Mile (G2)

Cross Border will attempt to give trainer Mike Maker back-to-back wins in the Pegasus Turf after saddling last year’s winner, Zulu Alpha. The 7-year-old son of English Channel was second in last year’s Sword Dancer (G1) and won the Bowling Green (G2), both at Saratoga. He comes into the Pegasus off a second-place finish in the Buddy Diliberto Memorial Dec. 19 at Fair Grounds.
Sharp Samurai was beaten a nose by Jesus’ Team for the place in the Breeders’ Cup Mile. The 7-year-old gelding, based at Santa Anita with trainer Mark Glatt, was second last year in the Pacific Classic (G1), Eddie Read (G2) and City of Hope (G2). His last victory was the 2018 City of Hope. Sharp Samurai is also on the invitation list for the Pegasus.

Pixelate, trained by Michael Stidham, comes into the Pegasus off a victory Dec. 26 in the Woodchopper at Fair Grounds. The Godolphin homebred and son of City Zip won the Del Mar Derby (G2) in September and was fifth in the Belmont Derby (G1) in October.

Anothertwistafate, winner Jan. 2 of the San Gabriel (G2) at Santa Anita and Sept. 10 Longacres Mile (G3), is invited to the Turf and is on the reserve inviation list for the Pegasus.

The Pegasus Turf also-eligible list is led by Next Shares, who will try to make his third trip to the Pegasus Turf the charm after a seventh-place finish in the 2019 edition and a 12th place finish last year. The 8-year-old would enter this year’s event off a third-place finish Jan. 2 in the San Gabriel.