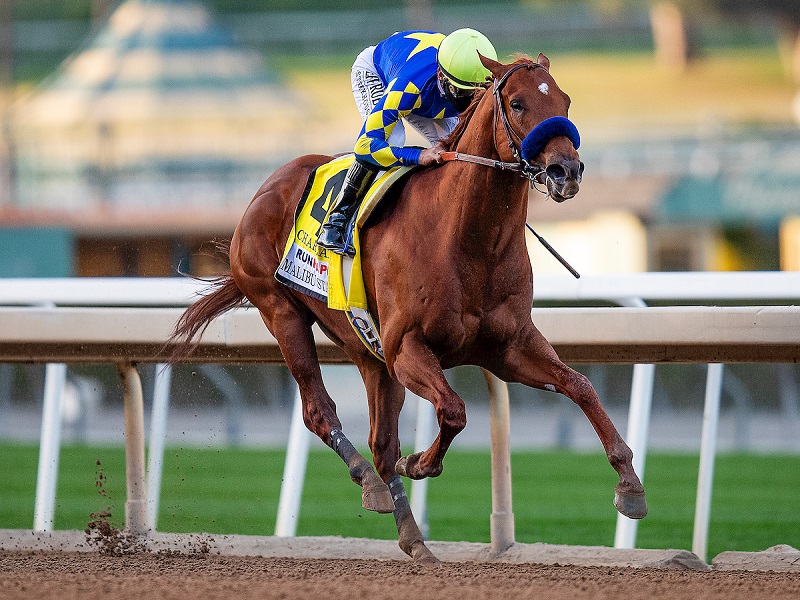 HALLANDALE BEACH, FL – Bob Baffert-trained Mucho Gusto and Charlatan are among a dozen Grade 1 and Grade 2 winners on a list of 16 horses invited Sunday to the $3 million Pegasus World Cup Invitational (G1) at Gulfstream Park.

The 12 horses given first preference for the Pegasus World Cup were (in alphabetical order):

The also eligibles are (in order of preference)

Baffert, who won the Pegasus last year with Mucho Gusto and the inaugural running with Arrogate, has two chances for a hat trick with his defending champion and Charlatan.

After his victory in the Pegasus last year Mucho Gusto finished fourth Feb. 29 in the Saudi Cup before Baffert gave the 5-year-old son of Mucho Macho Man time off. He returned Dec. 26 to finish fourth of six in the San Antonio (G2).
Charlatan was regarded as one of the country’s top 3-year-olds after his performance in the May 2 Arkansas Derby (G1) but he was sidelined with an ankle injury before returning off a seven-month layoff to win the Dec. 26 Malibu Stakes (G1) at Santa Anita.

Multiple Grade 1 winner Knicks Go enters the Pegasus off three consecutive victories since being moved to the stable of Brad Cox.  The 5-year-old Maryland-bred son of Paynter was an impressive winner last time out of the Breeders’ Cup Mile (G1).

Jesus’ Team, second in the Breeders’ Cup Mile and beaten less than a length by Knicks Go, sold for $30,000 as a yearling and has earned $508,940. The Jose D’Angelo-trained 4-year-old finished third in the Preakness (G1) and Jim Dandy (G2) last year.

Sharp Samurai was beaten a nose by Jesus’ Team for the place in the Breeders’ Cup Mile. The 7-year-old gelding, based at Santa Anita with trainer Mark Glatt, was second last year in the Pacific Classic (G1), Eddie Read (G2) and City of Hope (G2). His last victory was the 2018 City of Hope. Sharp Samurai is also on the invitation list for the Pegasus Turf.

W.S. Farish’s homebred Code of Honor will be making his 13th consecutive start in a graded race, his ninth in a Grade 1 event. Trained by Hall of Famer Shug McGaughey, Code of Honor was placed second in the 2019 Kentucky Derby (G1) and went on to win the Travers (G1) and Jockey Club (G1). Code of Honor’s 4-year-old season included a victory in the Westchester (G3) and second-place finishes in the Clark (G1) and Kelso (G2).

Tax, claimed for $50,000 out of his second career start by trainer Danny Gargan for co-owner Hugh Lynch, will run in his second consecutive Pegasus. The 5-year-old, an impressive winner of the Harlan’s Holiday (G3) at Gulfstream Dec. 12 off a seven-month layoff, was fourth in the 2019 Belmont (G1) and won that year’s Jim Dandy (G2). The son of Arch finished ninth in last year’s Pegasus after stumbling at the start.

Calumet Farm is hoping the third time is the charm for True Timber. Seventh in the 2019 edition of the Pegasus and eighth last year, the 7-year-old enters this year’s $3 million edition off a popular victory in the Cigar Mile (G1) Dec. 5 at Aqueduct. It was his first win in 13 starts, since September of 2018.

Sleepy Eyes Todd won the Mr. Prospector Stakes (G3) at Gulfstream Park Dec. 19. The 5-year-old son of Paddy O’Prado, who won the Charles Town Classic (G2) in August, has been a model of consistency, winning eight of 15 races while racing at 11 different tracks for trainer Miguel Angel Silva.

John Sondereker’s Kiss Today Goodbye, a lightly-raced 4-year-old, upset Mucho Gusto and four others Dec. 26 in the Malibu when he closed from last. Trained by J. Eric Kruljak, Kiss Today Goodbye had finished fifth in the Del Mar Derby (G2) and fourth in the Twilight Derby (G2) earlier in the year.

Harpers First Ride, a 5-year-old Maryland-bred, enters the Pegasus having won four of his last five starts including a victory in the Pimlico Special (G3). Maryland’s perennial leading trainer Claudio Gonzalez will saddle the son of Paynter.

Anothertwistafate, winner of the Jan. 2 San Gabriel (G2) at Santa Anita and Sept. 10 Longacres Mile (G3), is No. 1 on the also eligible list. The son of Scat Daddy is also on the invitation list for the Pegasus Turf. Locally-based Math Wizard, a Grade 1 winner who finished second last summer to Breeders’ Cup Classic (G1) show finisher Global Campaign in the Monmouth Cup, is second on the AE list while King Guillermo, owned by former Major League Baseball all-star Victor Martinez, and Idol, second in the San Antonio, round out the list.