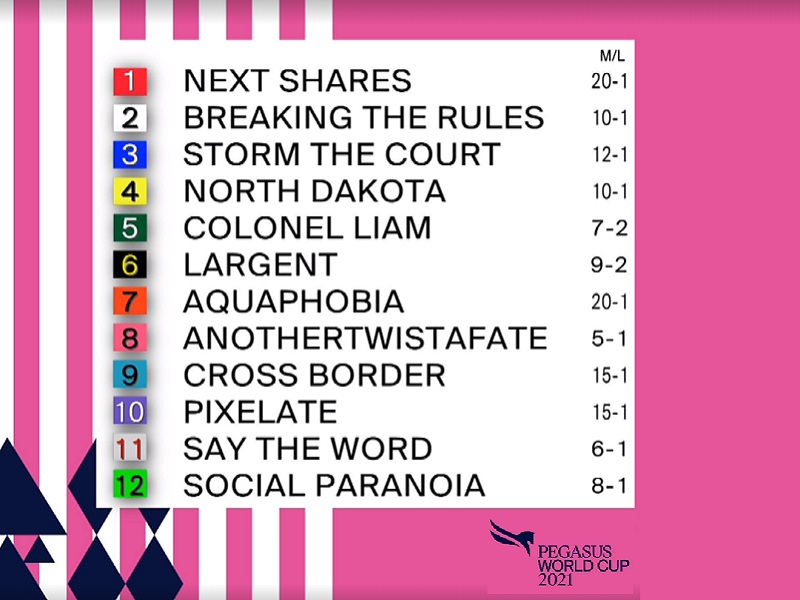 The third running of the 1 3/16-mile Pegasus Turf and the fifth renewal of the $3 million Pegasus World Cup (G1) at 1 1/8 miles on dirt comprise the Pegasus World Cup Championship Invitational Series, headlining a blockbuster 12-race program featuring seven graded-stakes worth $4.725 million in purses.

During Wednesday’s post-position draw inside Gulfstream’s Sport of Kings Theatre, Colonel Liam was made the narrow 7-2 program favorite over stablemate Largent (9-2) in a field of a dozen stakes winners, 10 of them graded, including Grade 1 winners Aquaphobia, Next Shares, Say the Word and Storm the Court, the 2-year-old male champion of 2019.

Colonel Liam and Largent are part of trainer Todd Pletcher’s triple threat that includes Social Paranoia (8-1), also among the five horses listed at less than double-digit odds. The others are Anothertwistafate (5-1) and Say the Word (6-1).

“The mile and three-sixteenths is a little different distance for Largent. He’s never been quite that far but the way he ran in the Fort Lauderdale going a mile and an eighth certainly gives you confidence he’ll handle it,” Pletcher said.

“Social Paranoia has won as far as a mile and five-sixteenths, and Colonel Liam was a little bit unlucky in the Saratoga Derby at a mile and a quarter. I think [the distance] should work for all three of them,” he added.

Colonel Liam, a 4-year-old son of Liam’s Map, is the least experienced runner in the Pegasus Turf.  Liam’s Map was a two-time Grade 1 winner on dirt for Pletcher, taking the 2015 Woodward and Breeders’ Cup Dirt Mile.

“It’s always fun when you’re training the offspring of a horse that you’ve trained,” Pletcher said. “It’s great to see Liam’s Map doing well as a stallion and showing his versatility of getting dirt horses and turf horses and good 2-year-olds, and showing that he’s capable of siring just about any type of horse.”

A $1.2 million purchase as a 2-year-old in training in April 2019, Colonel Liam went unraced as a juvenile before debuting against older horses going a mile on dirt last April at Gulfstream, where he was placed first after finishing a troubled second. Moved to the grass for the first time in his third start, he beat his elders again in an open allowance at Saratoga, then encountered trouble again while running fourth, beaten less than a length, in the Saratoga Derby.

Colonel Liam turned in his best performance to date last time out, rating in mid-pack off a moderate pace before coming with a four-wide move to take the lead and widen his advantage through the stretch to win the 1 1/16-mile Tropical Park Derby by 3 ¼ lengths Dec. 26 at Gulfstream.

“Very impressed,” Pletcher said. “I loved the way he pulled away at the end. We’ve always had high hopes for him, so it’s nice to see him living up to those.”

Irad Ortiz Jr., up in the Tropical Park Derby, rides back from Post 5.

Eclipse Thoroughbred Partners and Twin Creeks Racing Stable’s Largent also had a career-best effort in his most recent start, saving ground inside before forging a short lead at the top of the stretch and drawing clear to a two-length triumph in the 1 1/8-mile Fort Lauderdale (G2) Dec. 12. The 5-year-old Into Mischief gelding, never worse than second in nine starts with six wins, beat Virginia-breds in turf stakes at Laurel Park and Colonial Downs last summer.

“That was his breakthrough performance,” Pletcher said. “He’s always been very consistent. He’s run against some really nice horses. We took advantage of his Virginia-bred status because that’s what you’re supposed to do when you have those kinds of options. It wasn’t so much that we felt like he didn’t belong at Saratoga or some bigger races; we had the opportunity and wanted to take advantage of it.”

Paco Lopez gets the return call on Largent from Post 6.

Winner of the one-mile Poker (G3) in July, The Elkstone Group’s Social Paranoia, 5, went unraced until capturing a 7 ½-furlong optional claiming allowance Dec. 16 on the Gulfstream turf. The son of Street Boss owns three wins in four tries on the local surface including the one-mile Appleton (G3) last winter. He won the Dueling Grounds Derby going 1 5/16 miles at Kentucky Downs in 2019.

“He’s consistent and likes this course, and he’s proven at the distance,” Pletcher said. “The key, for him and Colonial Liam both, was we needed a race under their belt to kind of set them up for this. They were both coming off short layoffs so a prep race was important for both of them.”

Luis Saez, whose previous trip aboard Social Paranoia came in his March 2019 maiden triumph at Gulfstream, has the assignment from outside Post 12.

Peter Redekop’s Anothertwistafate, based in California with trainer Peter Miller, is a stakes winner on three surfaces. He won the El Camino Real on Golden Gate’s all-weather track and was second by a neck in the Sunland Derby (G3) on dirt, both going 1 1/8 miles, while on the 2019 Triple Crown trail.

The 5-year-old son of Scat Daddy won the Longacres Mile (G3) going a mile at Emerald Downs last September in one of only two 2020 starts, and in just his second race for Miller captured the 1 1/8-mile San Gabriel (G2) on the Santa Anita turf Jan. 2. Joel Rosario rides for the third straight race from Post 8.

“I don’t think [distance] will be an issue,” Miller said. “He’s the type of horse that doesn’t seem to get tired. He’s got a lot of stamina and is built like a horse that can get a mile and a half.”

A win by homebred Say the Word would be a fitting sendoff for Sam-Son Farm, the legendary owner and breeder of 84 Sovereign Award winners and four Eclipse Award winners, which is undergoing a complete dispersal of its racing and breeding stock. The 6-year-old gelding became a Grade 1 winner in the 1 ½-mile Northern Dancer (G1) last October on the Woodbine turf and exits a third, beaten one length, in the 1 ½-mile Hollywood Turf Cup (G2) Nov. 27 at Del Mar.

Hall of Fame trainer Shug McGaughey will send out a pair of contenders in North Dakota (10-1) and Breaking the Rules (20-1). Allen Stable Inc. homebred North Dakota, a 5-year-old half-brother to Grade 2 winner and influential sire War Front, needed seven tries to break his maiden but has won four of his last six races. The most recent came in the 1 3/8-mile Red Smith (G3) Nov. 21 at Aqueduct.

“He’s been kind of a late bloomer but he’s been doing well. His races, really all [last] year, have been good so we’re looking forward to running him here,” McGaughey said. “He’s a true distance horse, probably even a little more than a mile and three-sixteenths. The way he’s doing and the way he’s been coming around, all year really, [is great], and his races have been spaced and he’s fresh and we’re ready to give it a try.”

Another homebred, Phipps Stable’s Breaking the Rules is a 6-year-old son of War Front that has three career races over the Gulfstream turf, winning the Tropical Park Derby and finishing second by a head in the Canadian Turf (G3) during the 2018-2019 Championship Meet. He went two-for-five in 2020, running fourth in the Lure and Knickerbocker (G2) in New York and third by two lengths in the Fort Lauderdale under jockey Edgard Zayas after being bumped at the start.

“I think he’s had a pretty good year. I was disappointed in his race at Saratoga in the Lure. Then he came back and I thought he ran fine on a track he doesn’t prefer. He wants it hard and it had more give to it than I thought,” McGaughey said. “I thought his race here in the Fort Lauderdale was pretty good. I think that Edgard was not familiar with him and he told me he thought he was too far back and I think he moved a little bit soon on him. He got caught up on the outside and didn’t get beat far. It was a fast race, so I’m looking forward to getting him stretched out.”

Hall of Famer John Velazquez is named on Breaking the Rules from Post 2, while Jose Ortiz has the call on North Dakota from Post 4.

Exline-Border Racing, David Bernsen, Susanna Wilson and Dan Hudock’s Storm the Court (12-1) went winless in eight 2020 starts, including a sixth in the Kentucky Derby (G1), after clinching his Eclipse Award with a front-running head triumph in the 2019 Breeders’ Cup Juvenile (G1). He has raced three times on the turf for trainer Peter Eurton, running second in the 1 1/16-mile La Jolla (G3) last summer at Del Mar as well as the Mathis Brothers Mile (G2) Dec. 26 at Santa Anita. Julien Leparoux gets the assignment from Post 3.

Trainer Mike Maker upset the 2020 Pegasus Turf with Zulu Alpha, and while that horse continues to recover from an injury that knocked him out of the Breeders’ Cup last fall, Maker will be represented by the pair of Cross Border (15-1) and Aquaphobia (20-1).

“It was cool to win it last year, it’d be cooler to win this year and even cooler than that to win it again next year,” Maker said.

Three Diamonds Farm’s Cross Border owns nine wins from 30 lifetime starts and became a graded winner when elevated to first in the 1 3/8-mile Bowling Green (G2) last summer at Saratoga following the disqualification of Grade 1 winner Sadler’s Joy, who edged Cross Border by a neck. Last time out, the gelded 7-year-old son of turf champion English Channel was beaten a head when second in the 1 1/16-mile Buddy Diliberto Memorial Dec. 19 at Fair Grounds.

“I like his chances. He’s doing great and shipped over well. We’re looking forward to running him,” Maker said. “He’s been a very solid horse. We’ve had luck with him from 6 ½ furlongs to a mile and a half. He just loves his job and he’s easy to train.”

Paradise Farms Corp., David Staudacher, Hooties Racing and Skychai Racing’s Aquaphobia is the most experienced runner in the Pegasus Turf with 39 career starts, nine of them wins, none bigger than his one-length triumph in the 1 3/8-mile United Nations (G1) last July at Monmouth Park. The 8-year-old Giant’s Causeway horse has raced exclusive in stakes since being claimed by Maker for $62,500 last winter at Gulfstream, most recently running sixth by two lengths behind North Dakota in the Red Smith.

“He’s a horse we were trying to get for quite some time and we were fortunate to get him,” Maker said. “We gave him some freshening. He just got outrun last time and he’s doing super now. He’ll get a firmer course here which he likes and I think the distance is favorable for him.”

Tyler Gaffalione will ride Cross Border from Post 9. Joe Bravo, aboard in the United Nations, returns from Post 7.

Godolphin’s well-traveled homebred Pixelate (15-1) was a popular head winner of the 1 1/8-mile Del Mar Derby (G2) last September, and is coming off a half-length victory in the one-mile Woodchopper Dec. 26 at Fair Grounds. The 4-year-old City Zip colt will be making his Gulfstream debut in his 15th career start, having raced at nine different tracks in seven states. Edgard Zayas gets the assignment from Post 10.

Co-owned by a partnership that includes trainer Richard Baltas and his wife, Debby, Next Shares (20-1) is the richest horse in the Pegasus Turf with a $1.85 million bankroll and one of two millionaires in the field, along with Storm the Court. The 8-year-old Archarcharch gelding and 2018 Shadwell Turf Mile (G1) victor is winless since his triumph in the November 2019 Seabiscuit Handicap (G2).

Next Shares will be making his third straight appearance in the Pegasus Turf, having finished seventh in 2019 and 12th in 2020. Drayden Van Dyke has the call from Post 1.