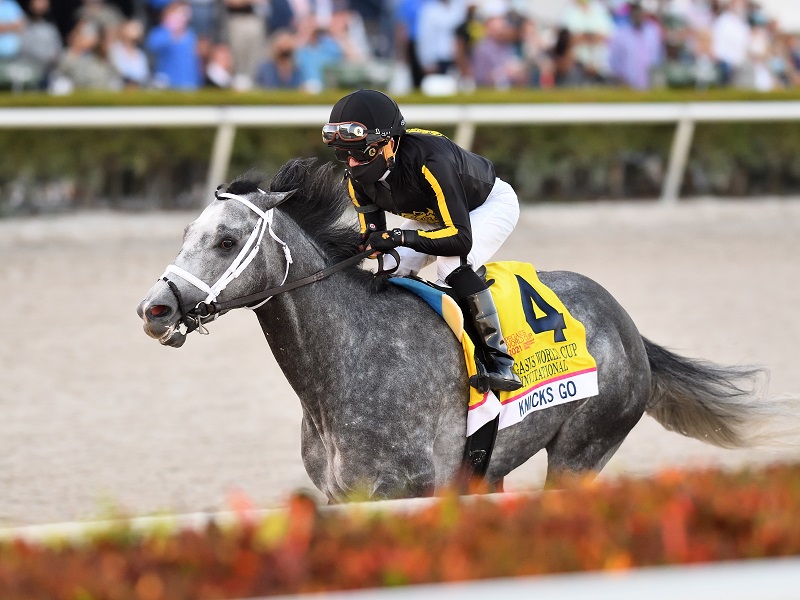 The Pegasus, a 1 1/8-mile event for 4-year-olds and up, and the $1 million Pegasus World Cup Turf Invitational (G1) co-headlined a 12 -race program that also included five other graded stakes.

Brad Cox-trained Knicks Go, who set a Keeneland track record with a front-running performance in the Nov. 7 Breeders’ Cup Dirt Mile, showed his heels to his 11 rivals while capturing the 5th running of the Pegasus by 2 ¾ lengths.

“He is one of the top handicap horses in the country now. He’s a top horse. This is what you get up for every day, seven days a week, long days for moments like this,” Cox said. “I’m very proud of the horse and my team and thank the Korea Racing Authority for the opportunity with this horse.”

Knicks Go broke alertly to round the first turn on top to show the way along the backstretch while pressed briefly by Last Judgment and stalked by Tax. After setting fractions of 22.90 and 46.16 seconds for the first half mile, Knicks Go maintained complete control under a motionless Joel Rosario on the far turn and on the turn into the homestretch. Under just mild encouragement from Rosario, the 5-year-old son of Paynter offered a powerful kick at the top of the stretch and drew clear under wraps.

“He’s a very special horse. He just goes faster and faster,” Rosario said. “He was really enjoying what he was doing out there, so I was never worried about somebody getting close to me.”

Jesus’ Team, who finished second behind Knicks Go in the Breeders’ Cup Dirt Mile, settled behind the pace in fifth along the backstretch before making a wide move into the stretch and closing steadily in to finish second under Irad Ortiz Jr.  Independence Hall saved ground in fourth before making a bid in the stretch, falling just a neck short of holding off Jesus’s Team.

“I felt comfortable. Joel had a hold on him. He had a little pressure on the outside, but he was fresh from the Breeders’ Cup, so I was confident he would stay on,” Cox said.

Knicks Go, a Grade 1 winner at 2, was winless in eight starts in 2019 before being transferred to Cox for the 2020 season. The Maryland-bred speedster won all three starts last year by a combined 21 ½ lengths, all in front-running fashion.

“It’s a very prestigious race. I know it hasn’t been around that long, but when you look at past winners, it’s a very prestigious list of horses that have won it – world champions, actually, with Gun Runner and Arrogate,” Cox said. “They weren’t just national horses. They competed and won on the world stage, so it’s a big race.”