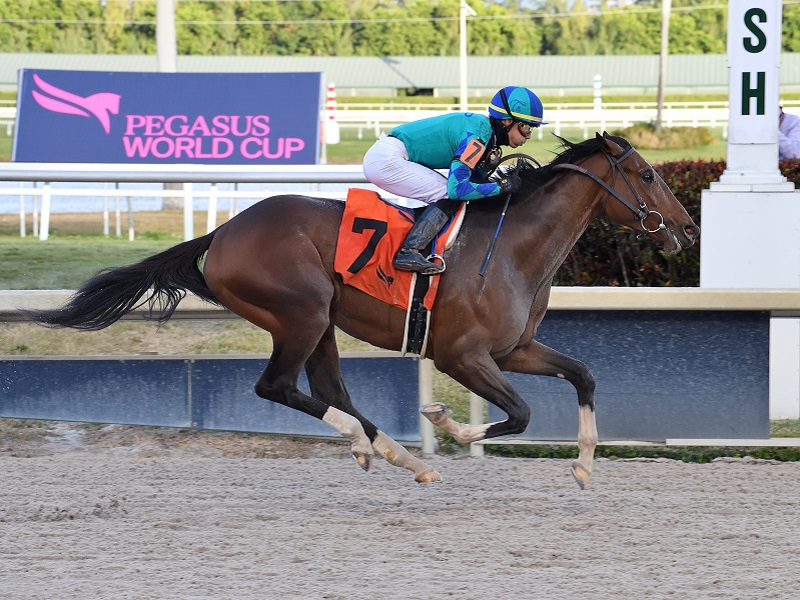 Greatest Honour, who also broke his maiden at Gulfstream Dec. 26, is trained by Hall of Famer Shug McGaughey, who saddled Orb for victories in the 2013 Fountain of Youth and Florida Derby prior to his triumph in the Kentucky Derby (G1).

Greatest Honour has won all three of his starts at Gulfstream over the 1 1/16-mile distance while rallying from well off the pace. The son of Tapit was fourth at the top of the stretch in the Fountain of Youth before surging to a 1 ½-length victory.

Godolphin LLC’s Prevalence is among the most prominent 3-year-olds on the Florida Derby nominations list, having won his only two starts impressively, both at Gulfstream Park. The Brendan Walsh trainee debuted Jan. 23, winning a seven-furlong maiden special weight race by 8 ¼ lengths, handily. The homebred son of Medaglia d’Oro came back to win a mile optional claiming allowance by three lengths March 11. A decision on the Kentucky-bred colt’s next start has yet to be announced.

Juddmonte Farms, Inc.’s Mandaloun, the winner of Risen Star (G2) at Fair Grounds, is nominated to the Florida Derby but is entered in Saturday’s Louisiana Derby (G2). John and Diane Franklin’s Rombauer, the Michael McCarthy-trained winner of the El Camino Real Derby (G3) at Golden Gate Fields, is also nominated but is not expected to run.

St. Elias Stable’s Known Agenda is among the likely starters in this year’s Florida Derby, which has been won a record five times by the son of Curlin’s trainer, Todd Pletcher. The homebred colt, who finished third in the Remsen (G2) at Aqueduct in his juvenile season finale, rebounded from a fifth-place finish in his 2021 debut in the Sam F. Davis (G3) at Tampa Bay Downs with an eye-catching 11-length victory at Gulfstream in a Feb. 26 optional claiming allowance at the 1 1/8-mile Florida Derby distance. Pletcher is also represented on the Florida Derby noms list by WinStar Farm LLC and CHC Inc.’s Sainthood, a Feb. 12 maiden winner at Fair Grounds following a narrow loss his Jan. 9 debut at Gulfstream.

Michael Shanley’s Nova Rags, who finished second behind stablemate Candy Man Rocket in the Sam F. Davis, is expected to run in the Florida Derby. Trained by Hall of Famer Bill Mott, the son of Union Rags had previously won the seven-furlong Pasco at Tampa.

Three Chimneys Farm and eFive Racing Thoroughbreds’ Collaborate, a $600,000 yearling purchase, is scheduled to make the jump from the maiden special weight ranks to Grade 1 company after rebounding from a troubled debut to graduate in spectacular fashion Feb. 27, scoring by 12 ½ lengths under wraps. The son of Into Mischief is trained by Saffie Joseph Jr., who is also represented on the nominations list by Moonlite Strike, who finished third in the March 6 Tampa Bay Derby (G2).

Hall of Fame trainer Mark Casse is expected to be represented in the Florida Derby field by undefeated Soup and Sandwich, a Live Oak Plantation homebred who debuted at Gulfstream Jan. 29 with a dominating 7 ¼-length victory in a 6 ½-furlong maiden special weight event. The son of Into Mischief came back to capture a two-turn optional claiming allowance at Tampa Bay Downs Feb. 24 by 2 ¾ lengths. Soup and Sandwich will be among the Florida-bred nominees who will be eligible for $100,000 in Florida-bred bonus money.

Magic Stables LLC’s Papetu, who finished third in the Fountain of Youth following a very wide trip from his outside post position, is expected to return in the Florida Derby. The Antonio Sano-trained son of Dialed In had previously finished second in the Jan. 2 Mucho Macho Man and fourth in the Holy Bull at Gulfstream. Sano-trained Sigiloso, a son of Khozan owned by Gelfenstein Farm, is also nominated to the Florida Derby. The Florida-bred, who finished third in the Kitten’s Joy (G3) on turf two starts back, is eligible for a $100,000 ‘Win Only’ bonus offered to Florida Sire Stakes-nominated horses.