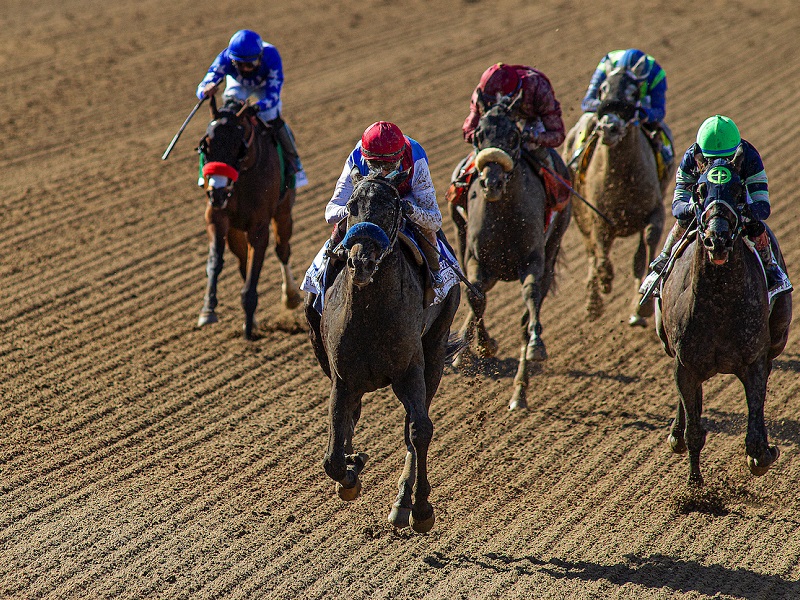 ARCADIA, Calif. (March 31, 2021) — A truly dominant force in American racing, Hall of Fame trainer Bob Baffert will send out likely favorite Medina Spirit in Saturday’s Grade I, $750,000 Runhappy Santa Anita Derby, a race that he’s won a record nine times.  Baffert will also saddle longshot Defunded as 10 sophomores go a mile and one eighth in the race that has produced a total of 19 Kentucky Derby winners.

First run in 1935, Saturday will mark the 84th running of the Runhappy Santa Anita Derby, which will be broadcast live on NBCSN.  With 170 Kentucky Derby qualifying points at stakes, 100 go to the winner, with 40, 20 and 10 points awarded to the next three finishers.

Medina Spirit, who was second, beaten eight lengths by his recently sidelined stablemate Life is Good in the Grade II San Felipe Stakes at 1 1/16 miles, was a gate to wire winner of the Grade III Robert B. Lewis Stakes two starts back on Jan. 30 and is regarded as a hard-trying over-achiever.

A Florida-bred colt by the Giant’s Causeway stallion Protonico, Medina Spirit was purchased for a bargain $35,000 out of 2-year-old in training sale last year and has done nothing wrong in four starts.  A first-out maiden winner going 5 ½ furlongs at Los Alamitos Dec. 11, he then flew to be second, beaten three quarters of a length by Life Is Good going a flat mile in the Grade III Sham Stakes here on Jan. 2.

With plenty of natural speed and two wins from four starts, Medina Spirit, who will be ridden by John Velazquez, looms the horse to beat as tries a mile and one eighth for the first time.  Owned by Zedan Racing Stables, Inc., Medina Spirit has earnings of $165,200.

The biggest question mark in the Runhappy Derby field is John Sadler’s Rock Your World.  Unbeaten in two starts, both on grass, this $650,000 Keeneland September Yearling comes off a rousing win in the one mile Pasadena Stakes Feb. 27.  If he can act on dirt like he has on turf, Rock Your World, who was bred in Kentucky by Hall of Fame trainer Ron McAnally and his wife Debbie, rates a huge chance with Umberto Rispoli up.

Owned by Hronis Racing, LLC and Talla Racing, LLC, Rock Your World is out of the multiple graded stakes producing Charm the Maker, who is by Empire Maker.  With four works since his Pasadena win, Rock Your World’s most recent drill came on Sunday, when he smoked a bullet five eighths on the main track in 59.20, best of 82 at the distance.

Bred in Kentucky by Don Alberto Corporation and owned by Don Alberto and Qatar Racing, LLC, Roman Centurian was never a factor when beaten 13 ½ lengths by Life Is Good in the Grade II San Felipe March 6, but it was a race in which everyone seemingly conceded the lead to the winner early and the race was for all intents and purposes, over when the field turned up the backstretch.  An impressive second, beaten a neck by Medina Spirit two starts back in the Grade III Robert B. Lewis Jan. 30, Roman Centurian broke his maiden at a mile and one sixteenth by 3 ¾ lengths on Jan. 3 and appears poised to bring his best for trainer Simon Callaghan on Saturday.

Out of the Bernardini mare Spare Change, Roman Centurian would certainly benefit from a fast early pace and will hope to be finishing as he was in the Lewis.

Second, beaten a nose by Derby hopeful Speilberg three starts back as a maiden in the Grade II Los Alamitos Futurity Dec. 19, the Doug O’Neill-trained The Great One was subsequently a smashing 14 length maiden going a flat mile here on Jan. 23, earning a career-top 92 Beyer Speed figure.

Fifth, beaten 16 ¾ lengths by Life Is Good in the San Felipe, The Great One need only run back to his maiden win to be a major force on Saturday.  Owned in-part by Colorado Avalanche defenseman Erik Johnson’s ERJ Racing, LLC, Train Wreck Al Racing Stables, Niall Brennan, Tom Fritz and William Strauss, The Great One is well seasoned, with six starts to his credit, four of them dirt routes.

While passively handled in the San Felipe, look for The Great One to again utilize his considerable speed and press or make the early lead on Saturday with regular rider Abel Cedillo up.  Bred in Louisiana, The Great One, named for NHL legend Wayne Gretzky, is by O’Neill’s 2016 Kentucky Derby winner Nyquist.

A lights-out first time maiden winner going 6 ½ furlongs on Feb. 7, trainer Peter Eurton’s Dream Shake was subsequently third, beaten 10 ¼ lengths by Life Is Good in the San Felipe March 6.  Dismissed at 20-1 in his debut, Dream Shake earned a lofty 96 Beyer and was suddenly in the Derby conversation.  A $75,000 2-year-old in training sale purchase last April, Dream Shake has trained well since the San Felipe, with a bullet five furlongs in 58.20 on March 20 (best of 75) and another five eighths in 59.80 on March 27.

With the San Felipe behind him, Dream Shake will be making his second route start and be ridden for the first time by Flavien Prat.  By Twirling Candy out of the Street Cry mare Even Song, Dream Shake, according to Eurton has done everything right since he first arrived and could improve by many lengths in what will be his third start.

Like Dream Shake, Baffert’s Defunded will also be making his third start, but he’ll be trying two turns for the first time.  In his second start here on March 6, Defunded acted like a colt that will relish a route, as he rallied from far back into splits of 21.60, 44.80 and 57.40 en route to an impressive 2 ½ length win.  Owned by Mike Pegram, Karl Watson and Paul Weitman, Defunded looms a dangerous commodity as “The Other Baffert.”  By Dialed In out of the Touch Gold mare Wind Caper, Defunded was purchased for $210,000 as a Keeneland September Yearling.