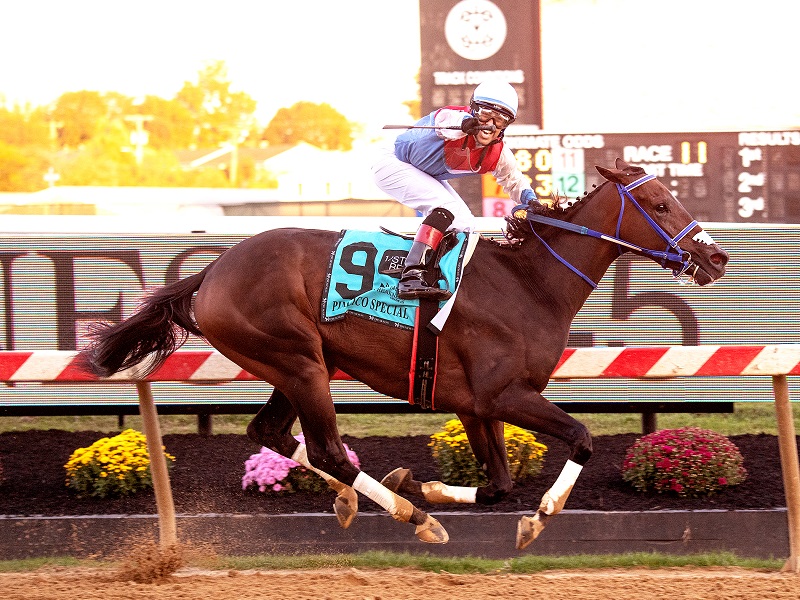 BALTIMORE – His owner, trainer and jockey will be different, but the scenery will be the same for Harpers First Ride when the defending champion returns to the site of his biggest victory in the historic $250,000 Pimlico Special (G3) Friday at Pimlico Race Course.

The 51st running of the Pimlico Special, on the eve of the 146th Preakness Stakes (G1), is one of six stakes, four graded, worth $1 million in purses on a spectacular 14-race card headlined by the 97th running of the $250,000 Black-Eyed Susan (G2) for 3-year-old fillies.

Harpers First Ride had raced five straight times in Maryland with wins in the Deputed Testamony, Pimlico Special, Richard W. Small and Native Dancer to cap his 4-year-old campaign when he was sold by owner-trainer Claudio Gonzalez prior to a start in the $3 million Pegasus World Cup (G1) Jan. 23 at Gulfstream Park, won by Knicks Go.

GTMP Stables, Arnold Bennewith and Cypress Creek Equine moved the Paynter gelding to trainer Robertino Diodoro in the Midwest, where he finished fourth in the March 13 Essex Handicap and third in a 1 ½-mile allowance April 11, both at Oaklawn Park under Diodoro’s go-to rider, David Cohen.

“We had some issues with his feet, and we got those fixed up,” Diodoro said. “To be honest, this is the best he’s been doing since we’ve had him. He’s doing really well. He worked really good at Churchill. Ever since we got some different shoes on him, the last couple of weeks he’s been like a completely different horse. We’re actually pretty excited about next Friday.”

According to Diodoro, the 1:03 official time for Harpers First Ride’s five-furlong work May 7 was misleading. The trainer said the horse actually worked seven-eighths of a mile, a move designed to continue past the wire and into the turn.

“David Cohen and I were talking that the time is definitely deceiving,” he said. “He did it very well. I would read absolutely nothing into the time.… I think we had the horse maybe 80, 90 percent the last couple of times. I feel like we’ve got him 100 percent now.”

Also returning from last year’s Pimlico Special are Forewarned and Cordmaker. Trin-Brook Stables, Inc.’s Forewarned, a 6-year-old Flat Out gelding, is a three-time stakes winner against fellow Ohio-breds who ran third in the Westchester (G3) last summer at Belmont Park and was fifth in the 2019 Whitney (G1) and Woodward (G1) as well as the Pimlico Special. He carries topweight of 126 pounds including 2020 Eclipse Award-winning apprentice Alexander Crispin from Post 3.

Hillwood Stable’s multiple stakes-winning Maryland-bred Cordmaker is making his third straight appearance in the Pimlico Special, having run third by two necks in 2019 and 2 ½ lengths in 2020. Last year’s race came during a career-long winless drought for Cordmaker of 10 races spanning more than 17 months. Second or third in six of those starts, all of them in stakes, he returned to the winner’s circle with a front-running one-length triumph in the 1 1/8-mile Harrison E. Johnson Memorial March 13 at Laurel Park.

“It had to be good for him because it got him more confidence. He ran a really nice race. We hope between that and the way he’s been training that he’s up to this,” trainer Rodney Jenkins said. “He’s doing really well. The horse is probably has never done better in his life than he’s doing now … I hope he runs as good as he’s training.”

Regular rider Victor Carrasco has the call from Post 8.

Max Player won the Withers (G3) in his third career start last February, then ran third in the Belmont (G1) and Travers (G1) and fifth in the Kentucky Derby (G1) during a Triple Crown trail reshuffled amid the coronavirus pandemic. He came to Baltimore for the Preakness (G1), where he rallied to be fifth behind filly Swiss Skydiver.

“Physically, he’s as good as he’s ever been,” Asmussen’s assistant, Scott Blasi, said. “His works have been solid. It should be a good spot for him. And, the Special has been good to us.”

Ricardo Santana Jr. will be aboard from Post 5 for Asmussen, who also won the then-Grade 1 Pimlico Special with Student Council in 2008.

Newly elected to the National Museum of Racing’s Hall of Fame, trainer Todd Pletcher will be going after his third Pimlico Special victory after winning previously in successive years with Revolutionary (2014) and Commissioner (2015). His candidate this year is WinStar Farm and CHC Inc.’s Fearless, winner of the Gulfstream Park Mile (G2) Feb. 27 in his first start in eight months. Last time out, he rallied to be second by a half-length to Silver State in the 1 1/8-mile Oaklawn Handicap (G2) April 17.

“[He’s doing] very good,” Pletcher said. “He was very good in his first start and just missed in his second. He seems to be in good form.”

Trainer Mike Maker will send out the pair of Last Judgment and Treasure Trove. Michael Dubb, Steve Hornstock, Bethlehem Stables and Nice Guys Stables’ Last Judgment has two wins from four starts this year, both in Florida – the 1 1/8-mile Sunshine Classic Jan. 16 at Gulfstream and the 1 1/16-mile Challenger (G3) March 6 at Tampa Bay Downs. Most recently he was second after setting the pace in the 1 1/8-mile Ghostzapper (G3) March 27 at Gulfstream.

Paradise Farms Corp. and David Staudacher’s Treasure Trove was claimed for $40,000 out of a win last fall at Indiana Downs. Though he has gone winless in five tries since, three of his losses have been by less than three lengths including a three-quarter-length loss when fifth in the 1 1/8-mile Ben Ali (G3) April 10 at Keeneland, his most recent start. He was fourth by 2 ¼ lengths in the 1 ½-mile Temperence Hill March 13 at Oaklawn.

“We should be well-represented there,” Maker said. “Treasure Trove got beat maybe three-quarters of a length in the Ben Ali and ran last, had a wide trip … He ran fourth in the mile-and-a-half at Oaklawn, got beat a couple of lengths. The race before in an allowance race there, he came up the rail and had to take up a little and wait and just got beat.”

Jose Ortiz will ride Last Judgment from outside Post 11, while Luis Saez has the call on Treasure Trove from Post 9.

Pam and Martin Wygod’s Modernist is a two-time graded-stakes winner, having taken the 2020 Risen Star (G2) and the 1 1/8-mile Excelsior (G3) April 3 at Aqueduct last time out. Junior Alvarado rides from Post 1 for Hall of Fame trainer Bill Mott, whose lone previous Pimlico Special victory came with Hall of Famer Cigar in 1995.

The Pimlico Special was created in 1937 by Alfred Vanderbilt, the master of Sagamore Farm, as the first major stakes in the United States set up as an invitational, and was won by Triple Crown champion War Admiral. The following year, War Admiral was upset by Seabiscuit in what Sports Illustrated called the ‘Race of the Century.’