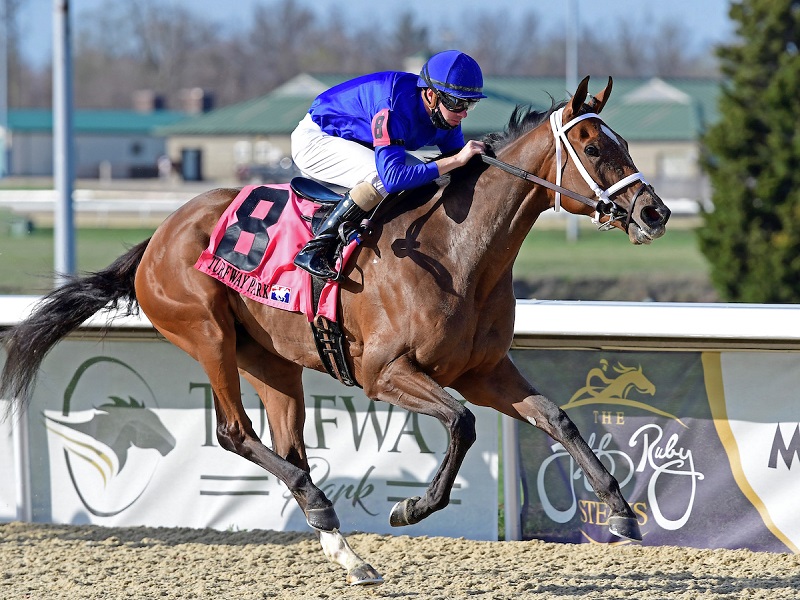 The 97th running of the 1 1/8-mile Black-Eyed Susan for 3-year-old fillies highlights a spectacular 14-race program that includes six stakes, four graded, worth $1 million in purses. It returns to its traditional spot on the eve of the Preakness Stakes (G1) after sharing the program with the Middle Jewel of the Triple Crown when the races were delayed from mid-May to early October amid the coronavirus pandemic.

Adventuring, second choice on the morning line at 4-1, enters the Black-Eyed Susan off back-to-back wins, graduating by 6 ½ lengths in a one-mile, 70-yard maiden special weight rained off the Fair Grounds turf Feb. 16. Most recently, she was a popular two-length winner of the one-mile Bourbonette Oaks on the all-weather surface at Turfway Park.

“Obviously, she’s very well bred … and we’re hopeful that she’ll be able to handle the  mile and an eighth. She certainly appears that she can,” Cox said. “She broke her maiden in an off the turf race on the dirt and performed extremely well. She was able to get the job done on the synthetic and she works well enough on the dirt to give us the confidence to try a graded stake on the dirt. We’re looking forward getting her up there.”

By Pioneerof the Nile out of the Hard Spun mare Questing, all Grade 1 winners, Adventuring – like Beautiful Gift – will be stretching out to her longest race yet. She was second in a 1 1/16-mile maiden special weight Dec. 20 at Fair Grounds to Will’s Secret, who went on to be third by two necks in the Kentucky Oaks.

“She had enough points to go in the Kentucky Oaks, but we thought the Black-Eyed Susan made more sense. Plus, she wasn’t nominated to we’d have had an extra large fee to run,” Cox said. “I really like her … She’s already a stakes winner, but we need to hopefully get some graded wins.”

Florent Geroux, up in the Bourbonette Oaks, gets the return call from Post 9 in a field of 10. All fillies will carry 120 pounds.

Also facing her longest race to date, Miss Leslie is unbeaten around two turns having also won the 1 1/16-mile Anne Arundel County Dec. 26 at Laurel Park in her 2-year-old finale. She owns four wins, two seconds and a third in eight career starts, three of those wins – and both stakes – coming since being claimed for $25,000 last November by Maryland’s four-time defending leading trainer, Claudio Gonzalez.

“When she ran the first time long, she proved right away that she loved the distance. And, she did it again the last time, too. She loves it,” Gonzalez said. “It’s going to be tough. It’s going to be different fillies coming from outside, not only local fillies. They are coming from everywhere. It’s a big race. I believe she has to show how she can handle the tough fillies.”

J.D. Acosta rode in the Weber City and will again have the assignment from Post 7.

Boama Corporation’s Beautiful Gift won one of two starts at 2, a one-mile maiden special weight last October at Santa Anita. Both her races this year have come there, as well – a gutsy head victory over Moraz in the Santa Ysabel (G3) and half-length loss to Soothsay while second in the Santa Anita Oaks (G2) April 3. Both races were contested at 1 1/16 miles.

Rather than send Beautiful Gift to the Kentucky Oaks (G1) April 30, the connections opted to wait for the Black-Eyed Susan. Hall of Famer John Velazquez will be aboard for the third straight race, breaking from outside Post 10, and are the 9-5 program favorite.

“She’s run well,” Hall of Fame trainer Bob Baffert said. “I was going to run her in the Kentucky Oaks, but it came up way too tough. That’s one of the toughest Kentucky Oaks I’ve seen. I didn’t want to put her through that. I said, ‘We’ll wait for the Black-Eyed Susan. You try to spot your horses, give them a chance where they have a chance to win.”

Recently elected to the National Museum of Racing’s Hall of Fame, trainer Todd Pletcher is a four-time winner of the Black-Eyed Susan with Spun Sugar (2005), Panty Raid (2007), In Lingerie (2012) and Stopchargingmaria (2014). He will be represented this year by Repole Stable’s Iced Latte, making her stakes debut.

Iced Latte, another Pioneerof the Nile filly, won impressively at second asking in a one-mile maiden special weight March 14 at Gulfstream Park. She stretched out to 1 1/16 miles in an optional claimer April 25 at Belmont Park, leading all the way until caught late by Midnight Obsession and running second by a length in the slop.

“It seemed like she handled it OK,” Pletcher said. “I don’t think it is indicative of her quality. We were impressed by her maiden win. She’s always trained very forward and I liked the way she breezed [the other] morning.”

Luis Saez is named on Iced Latte, 8-1 on the morning line, from Post 6.

Army Wife and Lady Traveler, both Grade 3 placed, look to break through with their first graded triumphs. Three Diamonds Farm’s Army Wife went winless in her first three starts last year, all on turf, before graduating in her first try on dirt. She hasn’t been worse than third since, winning an optional claimer March 13 at Gulfstream and running third behind Search Results and Maracuja, respectively second and seventh in the Kentucky Oaks, in a 1 1/8-mile Gazelle (G3) April 3 at Aqueduct.

“She’s a filly we’ve always been high on. She makes a fabulous impression,” trainer Mike Maker said. “She had a couple of months off and got a little behind, but she’s doing well and we’re looking forward to it.”

West Point Thoroughbreds, John Ballantyne, William Freeman and Michael Valdes’ Lady Traveler is well-tested against graded company, having run second in the Jan. 30 Forward Gal (G3) at Gulfstream and fourth last out in the April 2 Beaumont (G3) at Keeneland, both at seven furlongs. Her trainer, Dale Romans, won back-to-back editions of the Black-Eyed Susan with Keen Pauline in 2015 and Go Maggie Go in 2016.

“Last time, even though she didn’t hit the board, she ran a nice number and really showed improvement,” West Point COO Tom Bellhouse said. “In the middle of the race she started making a big move and, unfortunately, the horse that was in front of her when she started to make the move kind of drifted out and got in her way a little and kind of broke her momentum.

Lady Traveler (15-1) is a half-sister to two-time Grade 1-winning turf multi-millionaire Heart to Heart. She will be ridden by Hall of Famer Javier Castellano from Post 5.

“She’s a cool filly. She hasn’t been able to put it all together yet. She shows you glimpses of greatness at different times in the race,” he added. “She runs in snippets. She’s like the darling of the workout report guys. She works out great, everybody’s in love with her, she looks beautiful – and she’s finicky. She doesn’t tell you when she’s really going to run her race or not. We’re due. We’re ready to have some fun.”

SF Racing’s Spritz, second to Adventuring in the Bourbonette Oaks, is making her return to the dirt in the Black-Eyed Susan after spending the winter at Turfway Park. She was off the board in two dirt races last fall, one each at Monmouth Park and Delaware Park, before being moved to trainer Rodolphe Brisset.

“Our filly is doing really good,” Brisset said. “We saw the filly getting better, I thought, with each race. I don’t think we had the perfect trip in the Bourbonette. Maybe the five-eighths move was a little too soon after going 23 [seconds] flat the first quarter. We were second-best. Since that, the filly’s been working on the dirt very good.

“She’s definitely a two-turn horse and she’s tactical out of the gate. She’s shown us that the more we’ve run her, and we know that on the dirt it’s a pretty good weapon,” he added. “Based on the way she’s breezing on the dirt, it’s time to take a shot at it and see what she wants to do.”

Alex and JoAnn Lieblong’s Willful Woman (12-1) can give Hall of Fame trainer Steve Asmussen his first Black-Eyed Susan win. The daughter of Florida Derby (G1) and Kentucky Derby (G1) winner Nyquist is a half-sister to 2007 Fantasy (G3) winner Ever So Clever and was seventh in her only previous graded attempt in the March 6 Honeybee (G3) to Will’s Secret.

A maiden winner one race prior to the Honeybee, Willful Woman rebounded to capture a 1 1/16-mile optional claiming allowance April 9 in the slop at Oaklawn Park by 1 ½ lengths under Ricardo Santana Jr., who rides back from Post 2.

“She lost it at the break,” Alex Lieblong said of the Honeybee. “She was looking at something in the infield when they popped the gate and then got flustered when she missed it. It was just one of those deals where we were like, ‘Ok. Let’s start over.’ That’s what we did with the allowance. I hated that we missed the series there but it might wind up being one of those deals where it worked out for the best, if you just give them time.”

Completing the Black-Eyed Susan field is Louis Lazzinnaro’s The Grass Is Blue (6-1), who respectively ran fourth and third to her Chad Brown-trained stablemate Search Results in the Gazelle and March 6 Busher Invitational. A stakes winner in the 1 1/8-mile Busanda Jan. 24 to kick off her 3-year-old season, she was beaten two heads when third behind Miss Leslie in the Anne Arundel County. The Grass Is Blue will carry three-time Eclipse Award winner Irad Ortiz Jr. from Post 8.

First run in 1919 as the Pimlico Oaks, the Black-Eyed Susan was renamed in 1952 to honor the Preakness and Maryland’s state flower. Among its winners are Nellie Morse, who later became the only filly to then win the Preakness; Hall of Famers Gallorette, Twilight Tear, Davona Dale, Real Delight, Royal Delta, Serena’s Song and Silverbulletday; and divisional champions Vagrancy, But Why Not and Wistful.