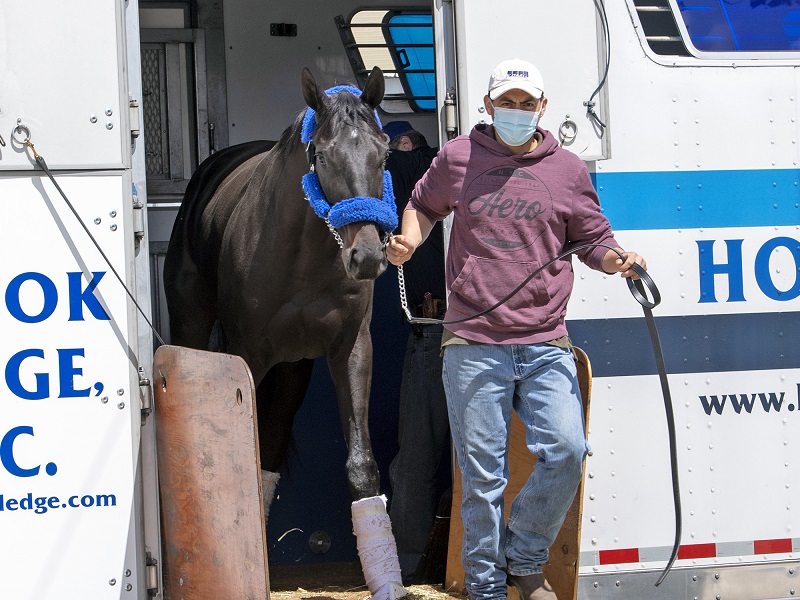 Under the direction of veteran assistant trainer Jimmy Barnes, the pair of 3-year-olds were led off the van to their stalls in the Preakness Stakes Barn. Barnes said the truck left Churchill Downs at approximately 4:45 a.m. and had no problems.

“It seemed simple,” he said. “Actually, we’re here even earlier than we fly sometimes. If you are on the second flight they have to come here and go back. Other than having to drive 600 miles, it went very smooth.”

Medina Spirit and Concert Tour were accompanied on the van by stablemates Beautiful Gift, who is scheduled to run in Friday’s Black-Eyed Susan (G2); Following Sea, who is slated to run in Saturday’s Chick Lang (G3); and Hozier, who is pointed to Saturday’s Sir Barton.

Barnes said he expects that the Preakness horses will go out to the track Tuesday morning between 7 and 9 a.m.

Monday brought a personal record for Hall of Fame trainer D. Wayne Lukas and, in the speedy process, Christina Baker and William Mack’s Ram is on the grounds at Pimlico in advance of Saturday’s Preakness.

The 85-year-old Lukas, a six-time winner of the Preakness, will go for No. 7 with the chestnut Ram, a son of 2015 Triple Crown champion American Pharoah.

Lukas, who rode shotgun in the van, arrived at Pimlico at 2 p.m., nine hours after he left Churchill Downs in Kentucky.

“The ship was easy,” said Lukas, wearing a white cowboy hat. “No trouble at all. I think this was the quickest we ever made it. It is beautiful country. You almost want to make the drive just to see the country. I told my wife if we are going to move anywhere, it's going to be West Virginia.”

Lukas said he will probably bring Ram to the track at 6 a.m. Tuesday so he can “stretch his legs.”